Posted by Konstantin Dmitriev on January 20, 2015

It’s been a long path since the day when we have started migration of Synfig Studio UI from Gtk2 to Gtk3 toolkit. And finally, today we are happy to present you the first testing builds for all supported platforms - Windows, Linux and OSX.

Those builds are also include all the latest developments made to Synfig code for the past months. Here’s the list of notable changes:

We would like to thank all people who supported our last fundraising campaign in May 2014 and keep supporting us after that through donations and subscriptions:

Thank you! You made all those changes happen, you helping us to keep moving, make Synfig better and get closer to version 1.0.

Hi guys!
It is exciting see the new version 1.0 coming along finally!!

I would tell you some of my wishes for this brilliant release:

The new release has LOTS of new goodies what would make very happy the user. But (always there is a but) there are still some bugs that needs to be fixed without more delay. One of them is the onion skin bug. It has stopped of working and I think it is essentially for many of the users. The other is the Preview window crash (at last in windows 32 bits). As you can see those two are blocking bugs for a stable release.

The two bugs shown above are just the result of 30 minutes of testing the development version. It is absolutely needed that we help the developers to focus their efforts on what fix first, because the better they are guided, the earlier the 1.0 version would be out. And I bet you that you’ll love many if the new features added…

So please, dear forum member, download and install the development version. Take some time to play with it (open your favorite compositions, explore the new features, etc.) and bring to the developers all the bugs you’ve found. Every tiny complain is valid. Some bugs are difficult to find and unfortunately some of them are difficult to solve. Let’s help the developers!

Also If you’re not certain what’s going on and are not ready to bug report there’s always the Debugging section of this forum, a halfway point between issue and bug report.

Hello,
Congratulations for this new version and many thanks!!
I hope, some day, colaborate more in the development of this project.

Bug?: Synfig crash if you want to render, and the animation is not saved before.

How to reproduce it:

Just make an animation with the usual tools. Don’t save it, then go to Render dialog. In “name of the file” go to “choose”. AFter that, I tried to change the directory, but the system crashed.

mmm… other thing, compared the screenshot with mine, I see that the handles doesn’t appear in my screen. MAybe is related with my monitor which is a Dell with a proportion of 12" x 9"

Other thing: what are those buttons in cross for each panel, can’t be disabled?

Anyway… it’s an excelent job for all of you 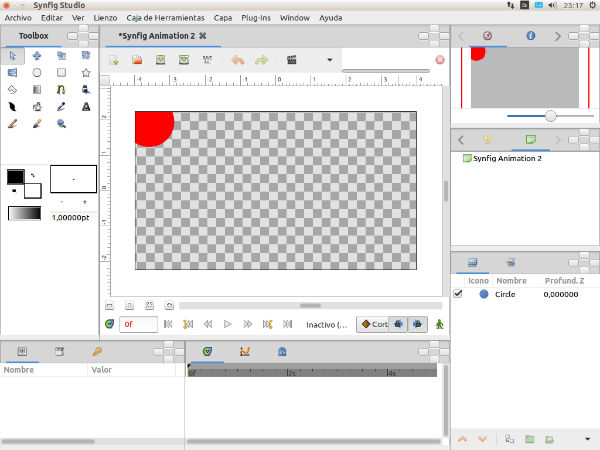 mmm… other thing, compared the screenshot with mine, I see that the handles doesn’t appear in my screen. MAybe is related with my monitor which is a Dell with a proportion of 12" x 9"

Other thing: what are those buttons in cross for each panel, can’t be disabled?

Those buttons are the places to drop down the panels tabs to arrange them in different configurations. Subdivide the panel it belongs to into two panels and the dragged tab would be in the relative place where you drop the tab over those four buttons.

But I was disappointed very quickly, because the interface is a total disaster. I know it’s rude to say that… Many people spend time on it and so on. So I will try to explain what I dislike:

Sorry if I were rude, it’s just… you know, ruined my dreams about a new shiny GTK3 interface that will bring peace to the Universe. 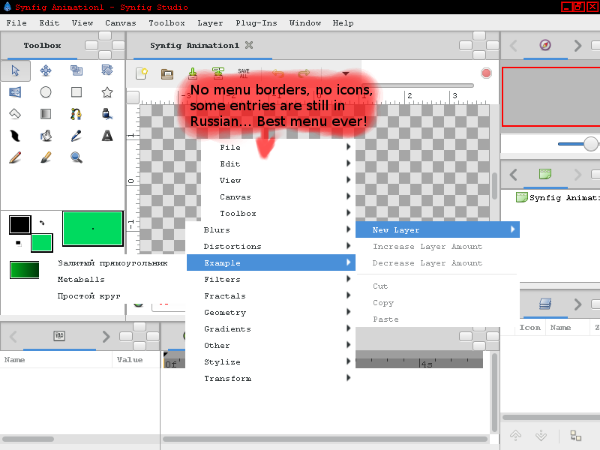 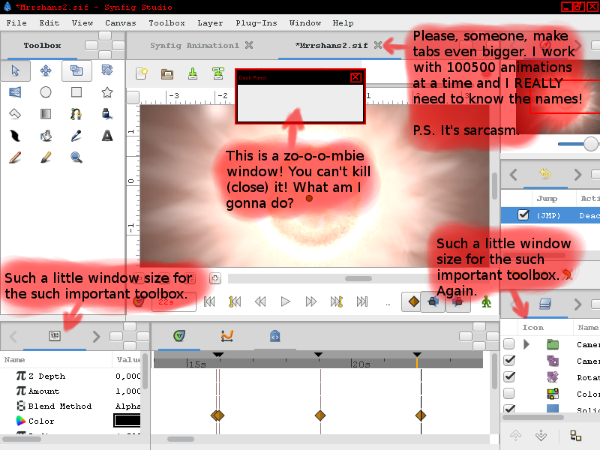 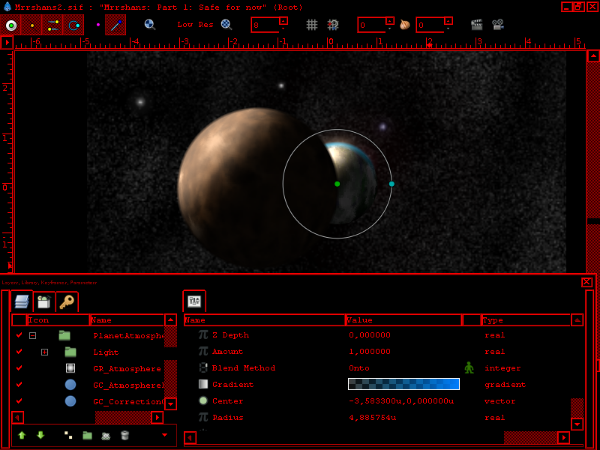 I had a mix of Dutch and English. I went to Synfig/share/locale/… and kept only the folder “en_GB”. That got rid of the Dutch words.

I don’t miss the timetrack in the main version, but I do think there should be an option wheter or not to display it in the main window.
Now that cairo is no longer maintained (must be a bummer for Genete, cos he worked long and hard to implement it) and I have to switch it of because it prevents the skeleton deformation (thx for Rylleman for mentioning that error) to work, I am more eager to switch of single thread too, which raises my next question: Is there still a problem with multithreading under windows?

Apart from that I am having tons of fun with this new version.

Aha, that fixed it - thanks! Seems like a bit cruel method… Oh, well.

I also get the timeline back. There’s a button for that I didn’t notice

Still, development build is hardly usable for me now. At least, not before 1, 5 and 10 items are fixed.

Time to open a feature issue to the tracker …?

At least for icons seams to be solved now , maybe the borders things could be reported to the tracker…

Time to open a bug issue to the tracker …?

Time to open an enhancement/bug issue to the tracker …?

Yep, reported has comment of Feature request #625 - Select ui language from user preference … i have reopen the issue and targeted it to 1.0 to do’nt miss it … thnaks!

Is freaky … can’t even wrote more about it … report ?

Sorry if I were rude, it’s just… you know, ruined my dreams about a new shiny GTK3 interface that will bring peace to the Universe

No problem … next time you report some many problems (proving you are using synfig ???) you will banned of the multiverse

Added the most important issues to bugtracker as d.j.a.y suggested.

I introduced this unfinished “Interface Language” function, yes, some part of ui string are loaded at very beginning, so they will not be changed even if you change UI language from “Interface Language” dropdown list. So if you would like to use english version of UI, you make have to manually change by export LC_ALL=“en” before synfigstudio startup, or you can just remove two Russian po files from Synfig Studio installation then it will fallback to english UI. Sorry for any inconvenience caused.

you make have to manually change by export LC_ALL=“en” before synfigstudio startup, or you can just remove two Russian po files from Synfig Studio installation then it will fallback to english UI.

Well, the easiest way for me was removing all folders except en_GB in the locale directory as darkspace65 said. But I think if localization is unfinished it’s better to leave it as it is in Synfig 0.64.3 (“interface languages” option during the installation process).

And of course, thanks jcome for your work. The GTK3 interface is not suitable for me now, but I will surely check the next builds.

Sorry for this delayed answer.

The handles doesn’t appear “as icons”, in the top bar, like the icons of “rendering”, “preview”, “save”, etc. And that long bar with a red circle with a “x”, it doesn’t do nothin most of the time, and is hidding the handle icons. I find it as a big problem: the handles appear as check buttons. Let’s say I want to hide the vertex handles. I uncheck it, and it goes back to the canvas, so I have to click again in the handles sub menu and chek and uncheck the other handles. A big amount of time is lost there. I don’t know if someone see what I see??.

Reading the message of Djay…There is a new version of 0.65??

Reading the message of Djay…There is a new version of 0.65??