There is Source (svg) file, you can download and play with it.

Hmmm… good work on this. I propose also to move top button bar from the canvas window to the toolbar.

BTW, jcome, have you thought about using some online UI mockup tool? Something like protoshare.com/ ? That could make collaboration easier.

I would really miss having the Zoom To Fit and Zoom to 100% icons by the top horizontal scroll bar if we go with this - I really find those useful.

I would really miss having the Zoom To Fit and Zoom to 100% icons by the top horizontal scroll bar if we go with this - I really find those useful.

how about the Gimp way? I updated the mockup by adding zoom widget on status bar, it is logical that zoom of document belonging to status. And it would really nice if we finally implement shortcrust system, so that this kind of frequent operations would be easily accessed by keyboard shortcrust. So we dont need put more and more “Useful” functionality into UI by hard coding. yes, this goes to far away from this topic, but I need to keep this in mind

Personally I prefer the four little buttons we have now, but it would be good to hear what other people think.

BTW: I love the arrows with the keys on - I always forget which ones are “jump to next key frame”, and this makes it explicit.

It’s good to have zoom controls in the status bar. We can have there both Gimp’ish drop-down box and four little zoom buttons we have now.

XD Actually, it is already quite good-lookin. But I kinda dig that “Menu” and “Play” buttons (not that I actually use them, since I always use “Preview”, which is much smoother comparatively).

Hi Zelgadis,
I am currently coding on std. menu and button bars implementation, and this Timebar re-arrangement is postponed or will be canceled since it will be removed from canvas window later in new ui design. We shouldn’t take too many spaces for Synfig Sutdio UI widgets itself, instead, the more space we return to animation artist, the more satisfaction will be achieved. do you agree? We have no any reasons to have duplicated time widgets on UI (on canvas window and time track panel).

Wish me good luck on standard menubar and buttonbar implementation.

Every time I look at one of jcome’s UI mock-ups, I can’t wait to see a cartoon made using his characters. In fact, I’m just as keen to see one of jcome’s cartoons as I am to see his new UI!

shortly will arrive distintion between keyframe activated and disable in the timebar …
synfig.org/issues/thebuggeni … issues/442

shortly will arrive distintion between keyframe activated and disable in the timebar …
synfig.org/issues/thebuggeni … issues/442
[attachment=0]Keyframe-TimeBar-distinction.png[/attachment]

Ok, I never knew that there is a disable state for keyframe

Ok, I never knew that there is a disable state for keyframe

It was introduced with the last release - synfig.org/cms/en/news/relea … io-0-64-0/ (see “Improvements for keyframes”).

Finally i have resolve my hardware power connector issue ! , and have news about disable state for keyframe. 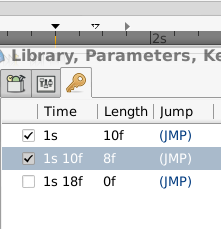 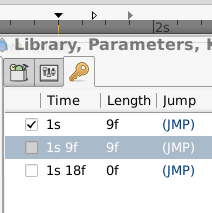 A little clean/comment in the code and i would submit that fioriture for next 0.64.01 if the code is not frozen.