[i]We are happy to announce that the first release candidate of Synfig Studio 1.0 is available for download and testing!

The upcoming version is the most significant update for the whole history of Synfig, summarizing the results of past 18 months of development. This release introduces many major features and dozens of improvements and fixes.

Within the next few weeks we are looking for your feedback - please report all problems/issues to our bugtracker. We also ask translators to update interface translations. Community members are welcome to update the documentation pages.

Love the new features, especially group transformations and the single-window UI. Thanks for your hard work!

I like the darker color scheme too. On Windows the text is difficult to read, though. Does anyone else have that problem?

It’s not really a big deal, though. I run Ubuntu in a virtual machine, and even virtualized the deb version of Synfig is beautiful, fast and stable.

IT’S BEAUTIFUL! I’m lovin’ it! Thank you so much, team!

Just one thing: The menu bar seems to be always visible, and doesn’t appear in Unity’s global menu thing.

EDIT: Also, I unchecked “Show Menubar” somewhere, and now the menubar is gone. Sweet, but… now I can’t get it back!

i want to say “normal” it’s not implemented !

hidden Menubar how to ???

hidden Menubar how to ???

Sorry for the double post, but thought I’d put this here: Is it just me, or is the Brush tool function quite slow? Trying to draw stuff and it seems pretty laggy. On just one frame.

EDIT: Also, the “Make New Frame” button doesn’t seem to work for me…

In general it seems more responsive than 0.63. The brush tool does feel sluggish though, as mentioned by tushantin.

As always, the speed depends quite a bit on whether you have multithreading turned on. I usually tell the Windows version to use a single thread, because it tends to be less stable.

One more note – I tried the RC1 on a Windows 8.1 box, and the text looks fine. So I’m not sure what was wrong on my other computer (Windows 7).

I’m using Ubuntu, and there doesn’t seem to be an option to set the number of cores (unlike its Windows counterpart), presumably because it’s pretty stable under Linux. But it’s still pretty sluggish. I’m unable to draw anything well enough with this…

The brush tool does feel sluggish though, as mentioned by tushantin.

But it’s still pretty sluggish. I’m unable to draw anything well enough with this…

Could you report it to the synfig buggtracker over Enhancement please ?

Could you report it to the synfig buggtracker over Enhancement please ?

Hello,
Now I see a lot a features that need some fix.
I copy&paste my critic of the other topic
1.

The handles doesn’t appear “as icons”, in the top bar, like the icons of “rendering”, “preview”, “save”, etc. And that long bar with a red circle with a “x”, it doesn’t do nothin most of the time, and is hidding the handle icons. I find it as a big problem: the handles appear as check buttons. Let’s say I want to hide the vertex handles. I uncheck it, and it goes back to the canvas, so I have to click again in the handles sub menu and chek and uncheck the other handles. A big amount of time is lost there. I don’t know if someone see what I see??.

Bug?: Synfig crash if you want to render, and the animation is not saved before.

How to reproduce it:

Just make an animation with the usual tools. Don’t save it, then go to Render dialog. In “name of the file” go to “choose”. AFter that, I tried to change the directory, but the system crashed.

Hi!
Great work with this release!
Overal text of menus and such on windows 7 is very pixelated and unreadable. Any way to change the font?
Still have to do more elaborate tests whether to see that using multithread under windows is more stable then used to be.
Greetz!

Overal text of menus and such on windows 7 is very pixelated and unreadable. Any way to change the font?

Hi, can you report an issue in synfig tracker ? (checked if not already reported… )

is that part is missing ? … did you test in fullscreen ? did you have an icon with an down arrow [V] to access to more entries ? os please (ubuntu 10.4 ?)

Am I the only one with these problems?

As you mention, it appears a down arrow [ v ] 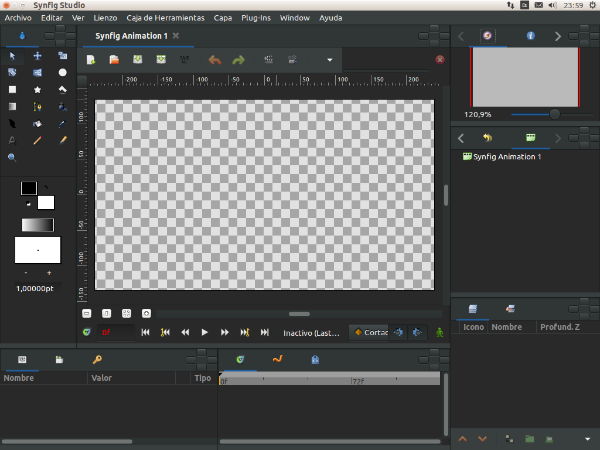 In the following, I reduced the size of the lateral panels, and now I can see too kind of handles but the others remain hidden 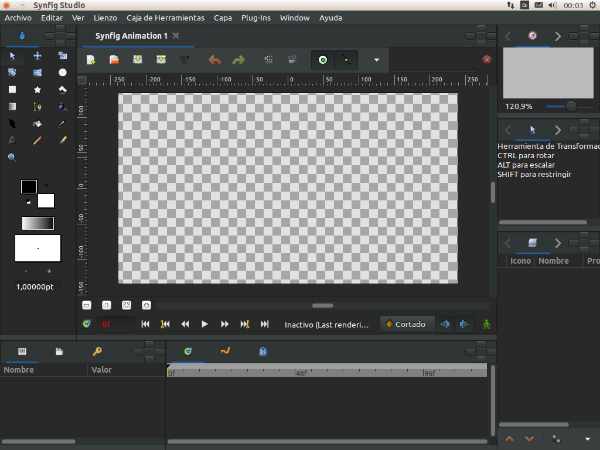 In the next, at the bottom left, you will see the parameters panel, specially a coordinates parameter, when editing. In order to see all the values, I had to expand that column, but still it’s not entirely visible. 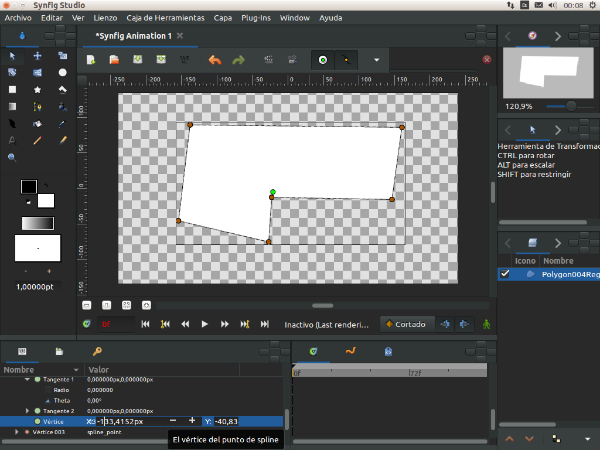 I won’t say anything about the interface, because I already stated what I don’t like in previous news, but please, guys, fix at least this bug: synfig.org/issues/thebuggeni … issues/749 before 1.0 release.

Currently, Synfig is not able to render a file that contain spaces in path and keeping in mind the fact, that a standard name for a project is “Synfig Animation1”… Well, you know, forum post with “Halp! I can’t render my first animation!” subject is guaranteed.

hi svarov, i suggest you to “vote” for the issues you found important, this can help the dev team to be accurate with the users needs

I also found a bug (by accident) as well.

The bug occured after i created a spline while a group is still highlighted.
First it shows up these error texts for several times, then Synfig Studio crashed.
Is it actually a bug…? 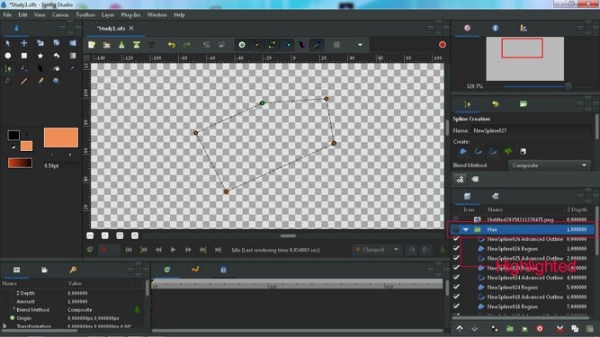 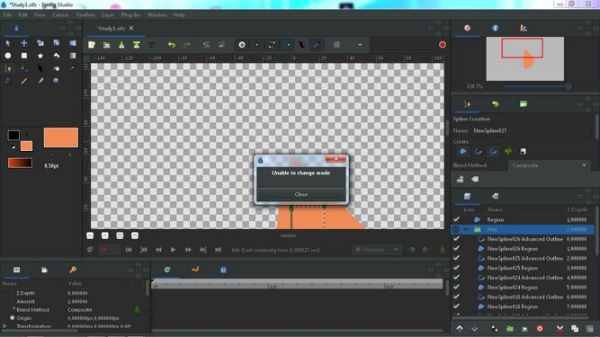 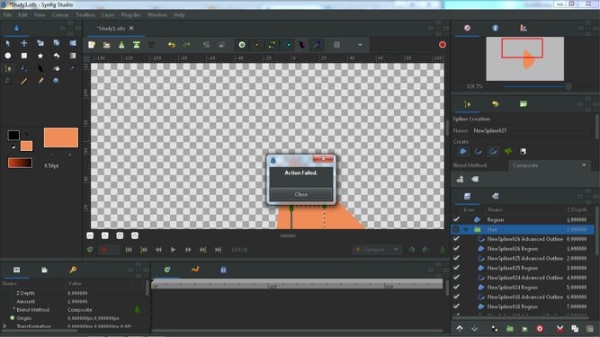 Can you please, respond by writing a step by step way of reproduce this bug ?