Hi all!!!
It is time for a new Splash Screen challenge!!
This time the usual rules are modified by the following additional rules:

I know that this can look a bit dictatorial, but it is the way other applications do the same.

As we will soon have the Synfig app for Mac, I had this idea (Hope you like it): 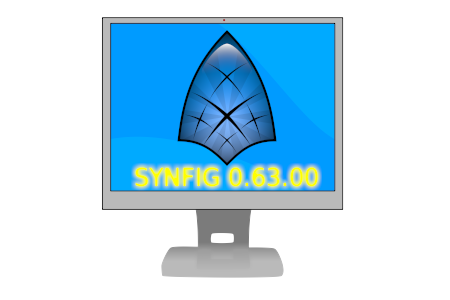 Hello !
Here is my proposal for the challenge.
I put a character, so we see that Synfig is for making movies, not just pictures!

I copied Chihiro for the little girl, I hope it does not show too ! 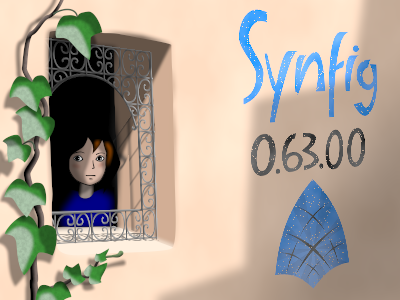 So here it is! After a loong time this mess is finally finished!
All made in Synfig after a sketch. Don’t know what’s driven me to do something that complicated. 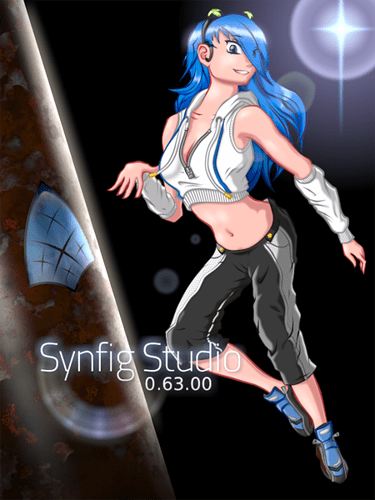 If there’s only one feature I’d like to be added in a future version, it would be a hardware-accelerated renderer.

BTW, it seems to me that the release candidate is more stable than the older versions because I was able to use multiple cores a bulk of the time. Good joob on that.

Or maybe it was just because this wasn’t an animation.

(The full-size image is in the 7z-file) 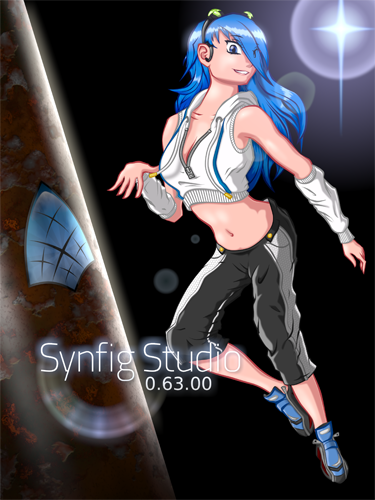 From now on, there will be only a splash screen challenge between major revision number releases.

I think it is not necessary. You can now use 0.63.00 and change the third number without changing the drawing in the minor revisions.

Hello,
It’s a lightly changed version of my picture, because my daughter didn’t like my ivy leaves… So I have modified a little bit. 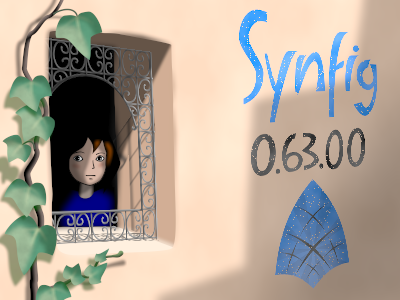 I added the license in the file (i had forgotten before).
Thank you Rafael, and I agree with you, Razputin’s picture is very impressive !
mad0splash0-63.sifz (92.5 KB)

@mad0: I also prefer your new version. Also because I tend to prefer soft shading.

But Rafael didn’t just mean my picture. He refered to yours too.

OK, some background informations on mine: I used layers with substractive blend modes for the skin shading to get better transitions and not just darken the color.
The pipe was done with lots of noise gradients. Even noise gradients masked by bigger noise gradients to make it more random. I masked the lighted part of the pipe with the noises on the surface and used bevels to add more depth and make it more realistic. Oh, and I used a pen tablet.

In case you want to have something changed, feel free to do it or ask me.

Finally the splash contest submit time has expired. It is time to take a decision from the forum administrators. This time there won’t be any community pool. Synfig Administrators (included forum moderators) will publicly vote here the preference between Rafael, mad and Razputin entries. It is possible to ask for modifications and corrections on the entry so once agreed the author must change. Also (I’ve not downloaded any of the files) there must be a compatible license to release the source file with the source code. If there is not any license inside the sif(z) file yet, it can be said here in the forum.

My vote goes to Razputin’s floating girl. I would ask for resize the splash final size to something smaller, I think.

Thank you very much to you three for participate!!

Administrators votes will end this Saturday. I need the Sunday to work on the release.
-G

Seconded! Although mad0 should have an honourable mention. (Or if you wanted to do the ‘two random splashscreens’ things again…)

So I have to vote?

Razputin’s one is well done, but much too manga for my taste.

But hey ! First no poll, and now just 3 admins’ votes! I know that Razputin’s image is fine, but now I feel that mine is so bad that it does not even deserve that you to talk about! Yet, I spent time on it …
No suspense, no fun… It’s a very disappointing challenge !
Sorry, but I don’t know if I’ll participate again !

But hey ! First no poll, and now just 3 admins’ votes! I know that Razputin’s image is fine, but now I feel that mine is so bad that it does not even deserve that you to talk about! Yet, I spent time on it …
No suspense, no fun… It’s a very disappointing challenge !
Sorry, but I don’t know if I’ll participate again !

I’m so sorry that you feel like that mad0

I swear that I can’t suspect this low participation when I stated the new additional rules!
I just can say that I like your entry too but I had to choose one for my taste.
I’m very very sad

Dont be sorry, genete, you at least voted! and there’s no problem if you prefer razputin’s image !
I like challenges because it make me progress , not to win (even if …

)
But I worked for 2 weeks (not full time! I have a job !) and it is true that my image was only commented by 2 people who vote !
Other admins have come on the forum, but the challenge didnt interested them.

And for the next splash screen, dont challenge, request an image of Morevna ! After all it’s the one of the few projects project with Synfig, it’s nice to promote it.
In any case, me, I’ll not do another challenge. But I still use synfig!

But I still use synfig!

Thank you very much. I can’t afford loose any other artist that knows and use Synfig as awesomely than you.
Btw, voting has not finished yet… Maybe I need to delay the release due to not good fixing of windows build or fill tool bug…
We will know this Sunday.
Tomorrow I’ll be out all the day.
-G

I agree with Mad0. I like a challenge not only because they make me better, but because there are always impressive entries. It’s fun to participate in a contest in which there are no prizes, but fun. In the case of the splash screen, the vote was also fun. Really I expected to have more entries here (I miss Animtim entries, Genete entries, Pixelgeek entries…and many others, always excellent).
@Genete: Suggestion: maybe you could rethink the new rules of competition for the splash screen challenge.

I want to share my opinion on the matter. If we use Razputin’s image, something has to be done about the expression on that girls face. I think it’s kind of creepy!

But seriously I mean that.

My personal opinion is that the low participation is not because the rules changed. It’s just such period for Synfig - there are low activity here last time.

Yes, the rules could be polished (I think they are too complicated), but I think that final decision about the choice of splash screen still have to be taken by staff. If people like, we can have separate community poll just for fun.

mad0 - your entry is nice but I like the Rasputinz more. Don’t be upset - it’s just your second entry during all Synfig period lifetime and loosing just once is not a reason to give up. BTW, everyone have full time job here. ~_^

Still I have some requests for composition of Rasputin’s splash. For example, I would like to make it simpler and lighter. Also add more space near the border (padding). I will try to make changes today by myself to show what I mean.

Everyone, thank you for participating! ^____^