After researching all day and not be able to find the solution to the problem of the layers order with Skeleton deformation, I decided to try to do it with a Skeleton layer. The problem I have now is that I don’t know if I’m not doing well the link to bone or is that what I do can not be done with a Skeleton Layer and Bitmaps Layers and what to use is a Skeleton Deformation Layer. I begin to be a little desperate.

What I have done has been importing different parts of the character in separate layers, place this in the correct position and create a Skeleton Layer with corresponding bones in place.

I then selected each layer and every bone and I made the Link To Bone, for the layer of an arm. For example: I’ve linked the left arm (brazo_iz) layer with the three bones of the arm, the right leg (pierna_de) layer with all four of the leg and so with all layers and bones .

So far so good, in fact, when I move some bones the character moves perfectly, as you can see in the picture. 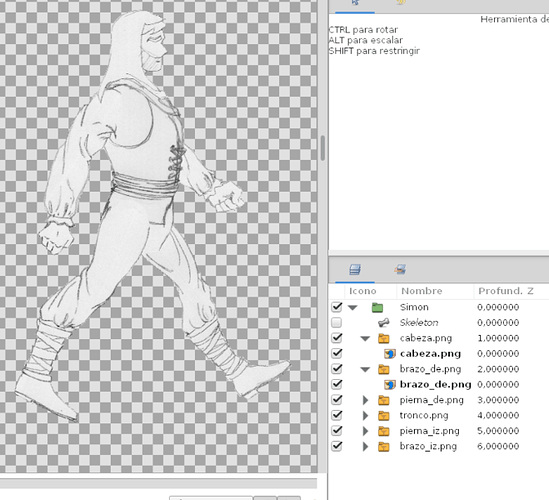 The problem comes when I try to move other bones, because instead of deforming the image, what it does is rotate as if the pivot point had a position relative to the bone, the IK doesn’t works as I suppose one that should work. I put a imageso you can see what he does when turning the bone marked with the arrow: 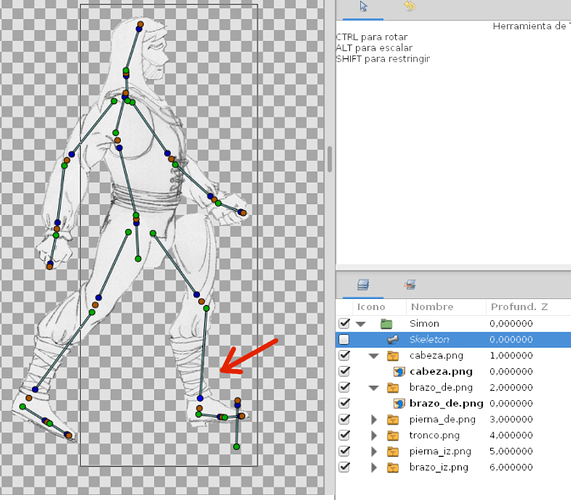 I attach the sifz file: https://drive.google.com/file/d/0ByRpD-7r4VVyN2phWmxWSHVkOHM/view?usp=sharing

Thank you for your help.

Hi!
I think your initial problem with layer z-depth is a bug. Using a skeleton layer is usually ment for vectors and if used on a bitmap it will not deform the bitmap, it will just rotate it if you link the bone of the skeleton to the group that holds the bitmap. One workaround I found is to use a skeleton deformation layer for each part you want to deform. That seems to get rid of the first problem. When you take several skeleton deformation layers then there is no link between them so if you rotate the hip the head will not follow but that can be solved by nesting groups and using the group transformation widget to rotate the whole of the character. I attached a little example to show you what I mean. Also as a general tip you might want to copy your png files out of the swith groups and keep them in normal (green) groups esp if you don’t plan to switch between your bitmaps.
Greetz!

… also have a look at this.
https://www.youtube.com/watch?v=Z93P30BJRrE

This is the best way for me (at this moment), because I’ve made a lot of animations without applications (with pencil, eraser and maker

) and I’m not accustomed to vectorize (I hate the vectorization and I love the pencil and the digital coloring, yes, definitely I need to renew my concepts

Hi!
You can post the issue with the layer order when using a skeleton deformation layer here: https://github.com/synfig/synfig/issues
Greetz!

Yes, I have already reported as a possible bug.