The SIF output extension is now part of Inkscape’s development repository. It adds a “.sif” option to Inkscape’s “Save As” Dialog. Please help test it to make sure that the version that ships in Inkscape 0.49 runs smoothly.

(If you’re using Inkscape nightly builds or building Inkscape trunk yourself the extension should be installed automatically.)

Inkscape writes out SIF files within the following constraints:

All SVG files falling within these constraints are fair game – if they don’t work, leave a comment here and I’ll try to fix the problem.

If everything works as expected, please post a reply as well. I would like to know how many people have tested it and what setups they use.

This is great nikitakit!. I will test it as soon as possible. It seems to be easier to maintain than the current svg import module.
Cheers!
-G

Nice! I already used it for a while it works well.

Thanks for your effort, it helps a lot on my icons design jobs.

and I found there is an issue: some of the line width is incorrect after converted as shown in the attached, 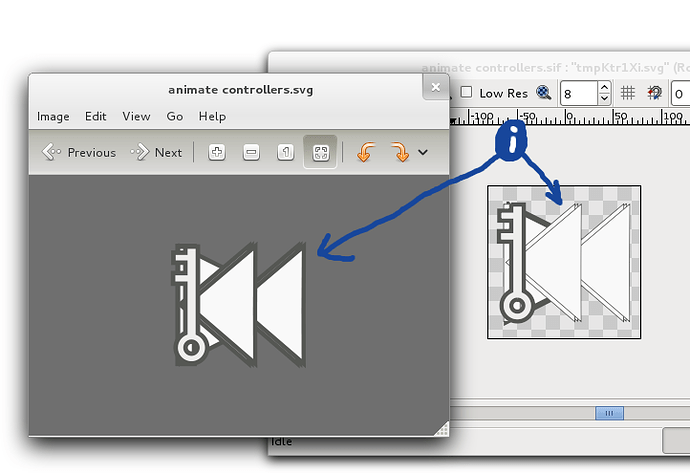 I attached the svg and sif files as well.

A small favor: once this extension reaches stable, we ought to make an “Extension page” somewhere (though this is not really a Synfig extension). Is the Inkscape community willing to host this? I ask because it’d be cool to have an easy-to-locate place for treasures like these.

Thank you everyone for your comments!

tushatin: The only extension repository Inkscape has right now is a wiki page. It’s a great reference, but not very user-friendly. I think the Inkscape forums would be the best place to advertise it on the Inkscape end, and I’ll update the Synfig wiki once this extension becomes stable. (I’ll need all of your help determining when that is, though).

The width problem is now (hopefully) fixed. Thanks for bringing it up.

Thanks, I will update my installation

Thanks, the line width is correct now.

I found some issue with new version (the prev version has the same issue):
after converted to sif
1, the geometry becomes open
2, there is one unexpected vertex as shown in attached screenshot.

This bug should be fixed now. I’ve rewritten the path-to-bline code, please tell me if anything new comes up.

Damn! I keep getting this error:

Damn! I keep getting this error:

Sorry to hear that. Can you post the SVG file (or send it to me)? I’ll try to figure out what the problem is.

Okay, but how do I send it to you? XD

I’m fine with any way you can reach me. If it’s a private file you can send me an email, if it’s not private you can attach it here. (There should me an “email” button in my profile.) Private messages here on the forums might allow attachments as well.

The reason I asked was because I couldn’t find an email address in your profile, nor does this forum allow private messaging. Ah, hell, here goes nothing.

Only forum moderators and administrators can see the emails. Anyway it is very easy to find nikitakit’s email in any of his code commits. (synfig.git.sourceforge.net/git/g … ;a=summary)
-G

Only forum moderators and administrators can see the emails.

Ah, good to know that.

My email is in fact public knowledge (from the git repo), but for some reason I still feel uncomfortable posting it on public forums. It doesn’t really make sense. I need to think about it.

Tushantin: the elf was a quite a good SVG file for testing purposes. I found and fixed three different bugs the converter had.

A new “stable” version of svg2sif is out. It’s mostly bugfixes - there aren’t any new features.

I’ve been running automated tests on the openclipart collection of SVG files, and that’s turned up quite a few bugs. The only major problem remaining is the way that multiple subpaths are treated. I’ll try to come up with a better algorithm for that in the near future.

My full support is there!
-G