I’m happy to announce the active development of a full replacement iconset for Synfig.

As I have been documenting, experimenting and working on it for a time, there is much to comment and ask so the post will be long. Anyway, for you that start reading this thread because you are eager of a new iconset, here is my actual progression:

A screenshot with all panels open: 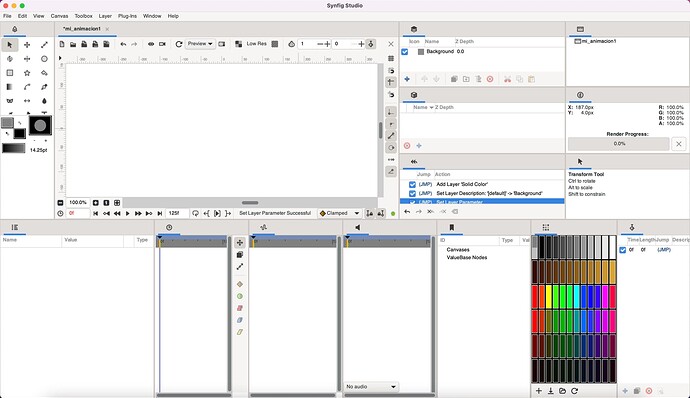 For development planning, I have also done a canvas with all icons inside the “classic” folder and with the new icons designed, both in their “light” and “dark” versions: 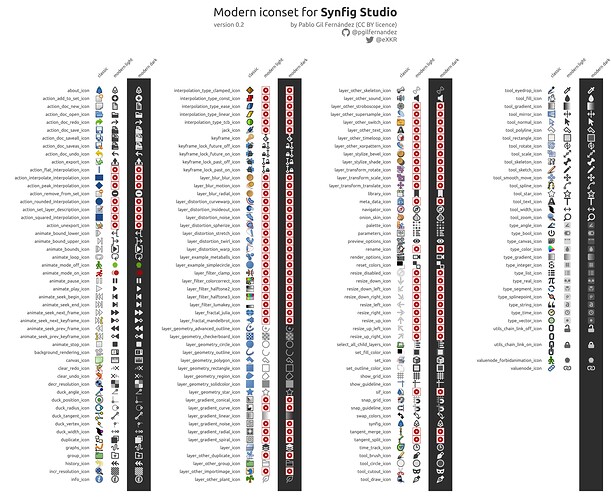 The icons that have a red circle with an X on it means that I haven’t designed the icon and should be done (I’m on it, hehehe).

Intrepid users may want to try them out so here you have a compressed folder with both “light” and “dark” versions, in order to install them you need to know:

1. browse the following path in your computer [path_to_synfig]/share/synfig/icons/
2. rename /classic/ folder as /classic_original/
3. uncompress the zip modern_iconset_v02.zip (1,7 MB) and place it in /icons/ folder
4. you will find /modern_light/ and /modern_dark/ folder. Rename the one you want to use as /classic/
5. Launch Synfig and enjoy

My intentions are to finish this iconset, not only all the ones in /classic/ folder but all needed ones in order to have a full replacement, so I will be committed to this task in the following weeks, months… I mean, this development is as serious and professional as I can (and my spare time lets me).

For those you want to identify me or know more about me:

Now I would like to open discussion and ask for answers to a few flaws I found while designing and trying the new iconset:

Well, I’m probably forgetting something, but the post is long enough, hehehe.

This happens in macOS and Windows, I haven’t tested Linux but it seems it’s gonna be the same.

When starting to study the icons from the “add layer” menus, I found out 3 layer that have no own icon:

I guess a developer may provide an ID name for that specific command so that I could include them as “themeable icons”. In the meanwhile I will design them.

I guess a developer may provide an ID name for that specific command so that I could include them as “themeable icons”.

I’ll take a look into it. For now, follow the current file name pattern:

There is another ‘layer’ that lacks an icon: layer_ghost_group_icon , that represents a layer that should exist in a Switch layer, but it doesn’t exist yet.

The Parameters Panel still misses some icons too, for certain parameter value types:

And what a fantastic work! After some PR related to GUI are merged into the main code, I can work on the ‘port’ the code to ‘officially’ (and finally do) support Gtk 3.18, and this icon theme can be added to Synfig.

You don’t need to rename the folders. You can set the icon theme in Preferences dialog. 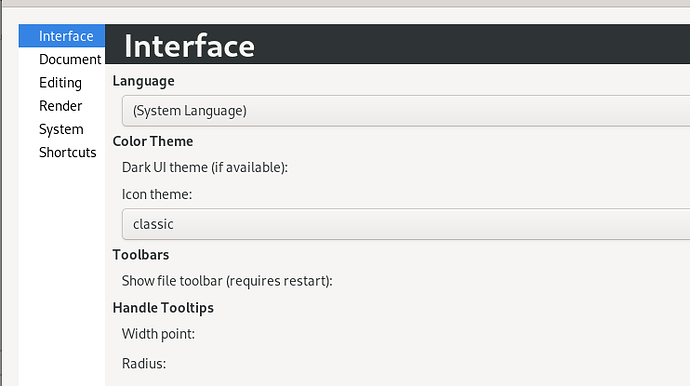 Great!
I’ll use that pattern.

I read about that Ghost layer in the forums but as I still did’t know what it really does I haven’t pay attention to it but, I can always include it in “my list” and there’s room for changes in the near future.

I also saw that “transformation” parameter didn’t have an icon but didn’t know about the other ones. Added to my list

It will be a pleasure to collaborate in order to add it to Synfig master.

You don’t need to rename the folders. You can set the icon theme in Preferences dialog.

Yes, I know about this feature that will let users easily switch to one icon theme to another but, at least under macOS, it only switches some icons, not all of them. That’s why I proposed a workaround. Is the feature fully implemented? if it doesn’t work for me may I open a issue in GitHub?

I had a little time to analize what happens under macOS and which icons switch and which don’t, here they are: 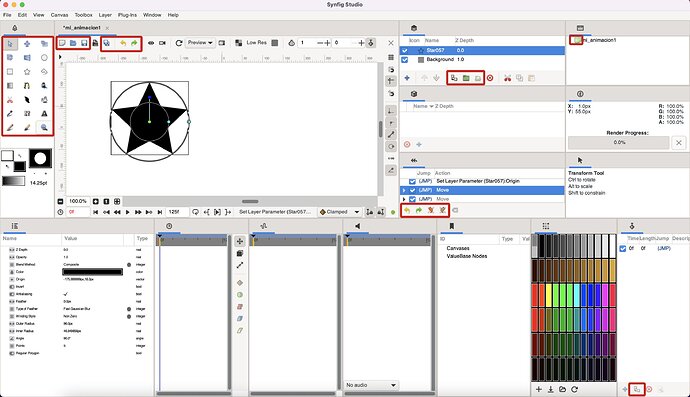 Is that a bug then?

I have just tested it on Windows and it behaves the same, same icons doesn’t switch.

Some icons are not directly from the Synfig Studio, we get them from the GTK (the graphics toolkit we use) theme. This is for some common actions like undo/redo/clear/new/open…

I suppose this choice was based on making the UI consistent with other GUI apps (icon themes are/were common on Linux).

Another option could be to make Synfig look inside your icon theme folder and if it doesn’t find, for instance “save_as_icon.png”, then apply the “system icon” but if it does apply the one from that folder that matches the icon theme. 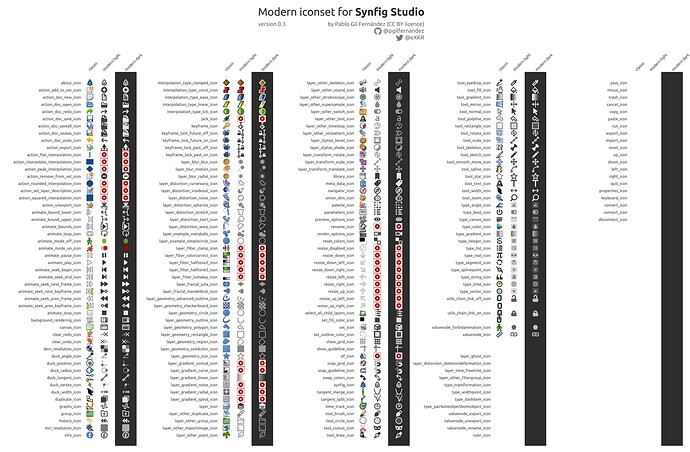 As commented in my first post, although under Synfig v1.5.1 Preferences there is an option to change “icon theme”, it only changes some of them, not the whole set so I suggest to test the modern icons as follows:

I’ve found more icons that are no themeables and some that may need to be splitted as they are used for different things (panels and layers) and it would be nice to have different icons for each. Also some other things that I think it’s better I move them as issues at GitHub.

@pablogil Are you drawing them as SVG or directly as PNG?

They are indeed been designed as SVG

and using the amazing Inkscape.

By now I’m not sharing them as they are a work in progress and because Synfig is unable to load them natively, right?

Anyway, if you are interested I can always create a GitHub project so that you follow the progress and in case you would like to tinker with them…

Once I update our Gtk support, we can use symbolic icons

That will be great! 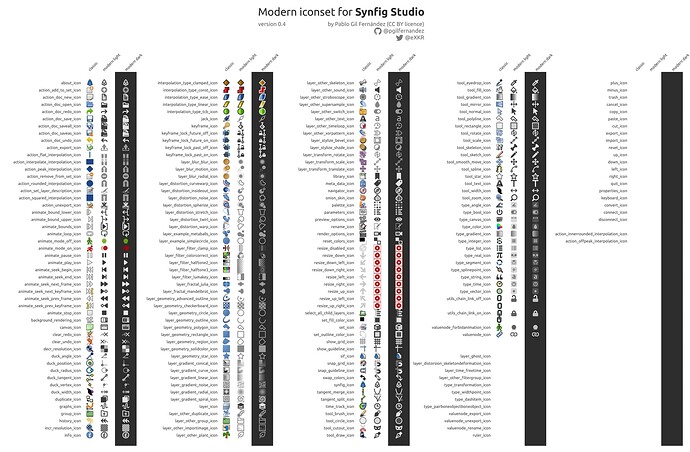 As commented in my first post, although under Synfig v1.5.1 Preferences there is an option to change “icon theme”, it only changes some of them, not the whole set so I suggest to test the modern icons as follows:

There is another ‘layer’ that lacks an icon: layer_ghost_group_icon , that represents a layer that should exist in a Switch layer, but it doesn’t exist yet.

@rodolforg, how could I check the Ghost Group layer funcionality so that I can design an icon for it? I have seen references in the source code but it looks like it is not operative… am I right?

@rodolforg, how could I check the Ghost Group layer funcionality so that I can design an icon for it? I have seen references in the source code but it looks like it is not operative… am I right?

Ghost layers are layers that are supposed to exist in a Switch Layer, but don’t.
The Active Layer Name parameter of a Switch Layer can be set/animated with non existent inner layers. In this case, Synfig Studio will show fake/bogus layer children with those names.

A user-written sif file can have it, but here is a way to make it, and the correspondent file:
ghost-layer.sifz (1,2,KB)

Other way to make it happen is to import a lipsync file that you didn’t prepare all the mouth shapes.

Thanks @rodolforg, now I know how to get a ghost layer but… is this a bug? I mean, in what scenario would it this be useful?

I would say that if you rename a layer which is inside a Switch Layer, then the Active Layer Name should update with the new name, doesn’t it?

Finally, I guess this is the ghost layer that I should design the icon for, right? 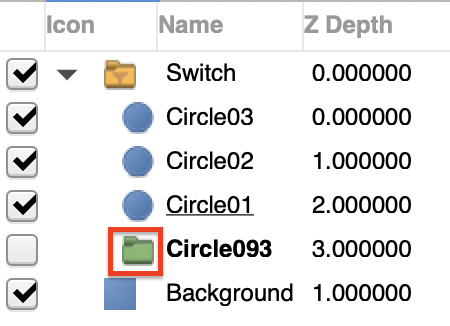