Before I show you the image (unless you’ve looked at the thread’s thumbnail), I have to explain a bit of context behind this drawing because it’s… quite a strange one.
And honestly, I… don’t have much (or even enough) context to give either.

So this is all started when I was looking for a tutorial video on digital coloring anime hair (with highlights, strands, and all those kind of stuff). After I found one, I decided to try replicate it on Synfig. I figured out that I need to find a pose that shows alot of hair, as it is the main focus of the attempt. One that came into my mind is sleeping pose.

Then somehow, I thought of, “sleeping in a comfy, spacious cardboard box”.

And that’s how this was came to be. 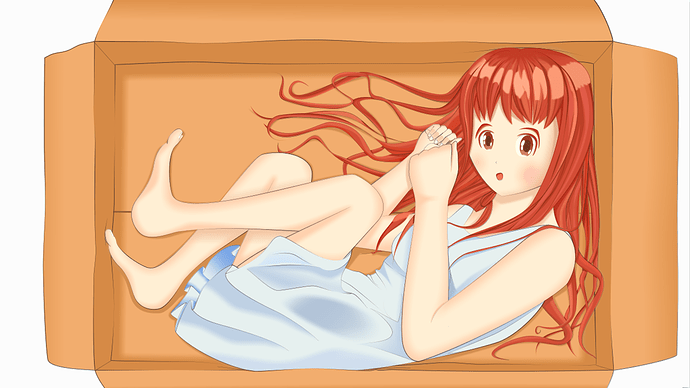 That’s it. That’s the entire context.
Yeah, I really did not think this through…

I actually have started this drawing many months ago, but I had to stop working on this for a long while (it was like months of gap). It was halfway done, I’ve finished the lines, base coloring all the regions, and colored her clothes with details. But when I was detailing the hair, I got so demotivated because that part felt extremely daunting, (so… much… layers… to manage… >-<), and I also got reaaally tired at that time. So that’s where I stopped it.

another reason was because Synfig kept crashing when I copy some layers twice. But turns out that was just the ‘Sets’ fault (took me bloody ages to figure that out).

Then about few weeks ago, I came by this file again while browsing through my Synfig stuff. But this time, I’ve had enough of not being able to finish this at all, so I was like, “heck it, let’s just get this done for real, no matter how it’ll turn out”.

Now that I have a slightly better layering knowledge and slightly faster Synfig (and have deleted all of my ‘Sets’ for real this time), finishing the entire hair coloring took me about… a week.
yeah… I felt really stupid now for putting it off for so long

Then I moved on to coloring the last bits (facials, the cardboard, etc), taking care some loose ends, and finally, that’s the drawing done!
It’s not really amazing, but I think I did a decent job (especially on coloring her hair).

I was kinda debating on whether I should add some background to this or not, but I decided not to, just to keep things simple