Iam running synfig on my phone

How’s the performance there btw?

The compileing took 4-3 hours but overall it’s quite usable when lunched . The problem is termux (the app that let’s you run linux software on android) gose through alot of layers and dosent run natively on the phone. most of the modern smartphones have the potential of a laptop but the software isn’t really that good

Bravo for the experiment!

Something I tried in the past was running a remote Synfig from my tablet
Either via VNC or RDP.
Synfig running on the computer (possibly in a Virtualbox with RDP), and bluetooth mouse on the tablet, through wifi…

Note: we could compile for Android if we were using Qt instead of GTK, but we are a bit “tied” to it

Thanks😄!
It’s pretty much the same the only deference being that it just runs one the phone and you could use it on the go !

I think synfigs gui with gtk is pretty awesome in its current state. there are some minor problems like the sorting order,value text boxes,and sometimes some little glitches
But overall it’s very well designed!
in my opinion for now it’s better to focus on the more fundamental things like moving objects in real time or better svg importing/exporting .
Aldough all of this being said I really like the Idea I personally hate the way that gtk(devs) is(are) going and if it continues to be like what it is I think I would be a good idea for the far future to have a qt version of synfig

Interesting, I would love to hear your full take on the current direction of GTK. I’ve been reading about the experiences that other open source projects have had with GTK and there seems to be a variety of perspectives. Apparently Inkscape is pushing ahead towards GTK4 while the audio editor Ardour has almost completely phased out GTK. What are the changes that you disagree with?

Hi !
I don’t wanna start a civil war down here
BUT
First of all CSD it’s a war crime it mess up every thing it wastes alot of space (yes more than having a toolbar and a title bar) and it just brakes the look and feel of your desktop it’s just a useless and frustrating thing
Second it dosent look good on all DEs
I iam running a xfce desktop and aldough the desktop is based on gtk qt programs never look alian but with gtk programs especially the gnome ones they look just awful gtk only looks good when ran on gnome but qt is nice every were
Third is the file chooser
Wanna just choose a file? NOPE I will run the hole nautilus BUT YOU CANT ENTER PATHS and some how we trimmed down nautilus even more I swear to God the javas file chooser is more functional even the fontforge home made widget set has a better file chooser

And the last part is the developers
Oh the developers! I came to opensource for democracy but these devs have a dictatorship running in there community the simply don’t care about you “they know what’s better for you” I have seen alot of issues in there gitlab but 99 percent of the time there answer is in this lines “I do not see a bug here but expected behavior” “it’s a not a bug but a feature” they just don’t care they are the worst most argent developers that I have ever seen in opensource community

plz don’t kill me it was all a opinion

Haha, that was great! I don’t know enough about programming to have strong opinions on these things myself, but I do know that most open-source developers love to complain about open-source projects and I love to hear it. Feels like I’m learning something.
You made me look up what CSD means (Client-Side Decorations). Seems like a big miss if it can’t apply user-chosen desktop themes to the application. Maybe I’m misunderstanding, but isn’t that the whole point?
I tend to hear a lot of complaints about gnome projects especially. They’re often described as old, messy, and hard to work with. I tried learning gtkmm 3 a while back. The best help I could find online was a decade old tutorial. To its credit, it is a comprehensive document, but it required knowledge of how to compile and build C++ projects so I had to go and learn CMAKE before I could even helloWorld. I ended up running out of time before I could really dig into it. Shoutout to Code, Tech, and Tutorials for making the best CMAKE tutorial by the way.
Qt by contrast seems a lot more accessible. I understand why some devs prefer the more open licensing. It lets them earn income building private qt apps, but that always comes with a big asterisk in this era of planned obsolescence where companies can pull products from the server without any recourse. If Qt wasn’t privately owned then it could be the definitive choice for open-source projects.

miss if it can’t apply user-chosen desktop themes to the application. Maybe I’m misunderstanding, but isn’t that the whole point?

Actually you still can theam the program and the cs bar but it’s through gtk theams. the problem is that you need to find a gtk theam that Has matching color schemes icons fonts and etc (for the cs bar)to your ssd theam (your wm ) and that’s really hard and if you somehow find one. csds will still look alian because of there huge size and also you can’t change the close buttons place ( say goodbye to your mussels memory )
I would call it mostly a side effect
As the Wikipedia said

By using client-side decoration rather than traditional server-side decoration, applications are able to draw their own title bar, which allows for a wide range of possibilities to customize window decorations and add additional functionality (graphical control elements) into what otherwise would be a typical window manager bar with much empty space in the maximized windows.

There is no intention to remove theamablety but it’s something that automatically comes with csd. there are meny other side effects like :
Not being able to close a crashed program
Because the csds are a part of the programs ui they are effectively in a same process but with ssd it’s actually your wm who is responsible for closing the program
So when a csd program crashes its close buttons crashes too and you need to go ahead and pkill the process
And also the unity of the desktop 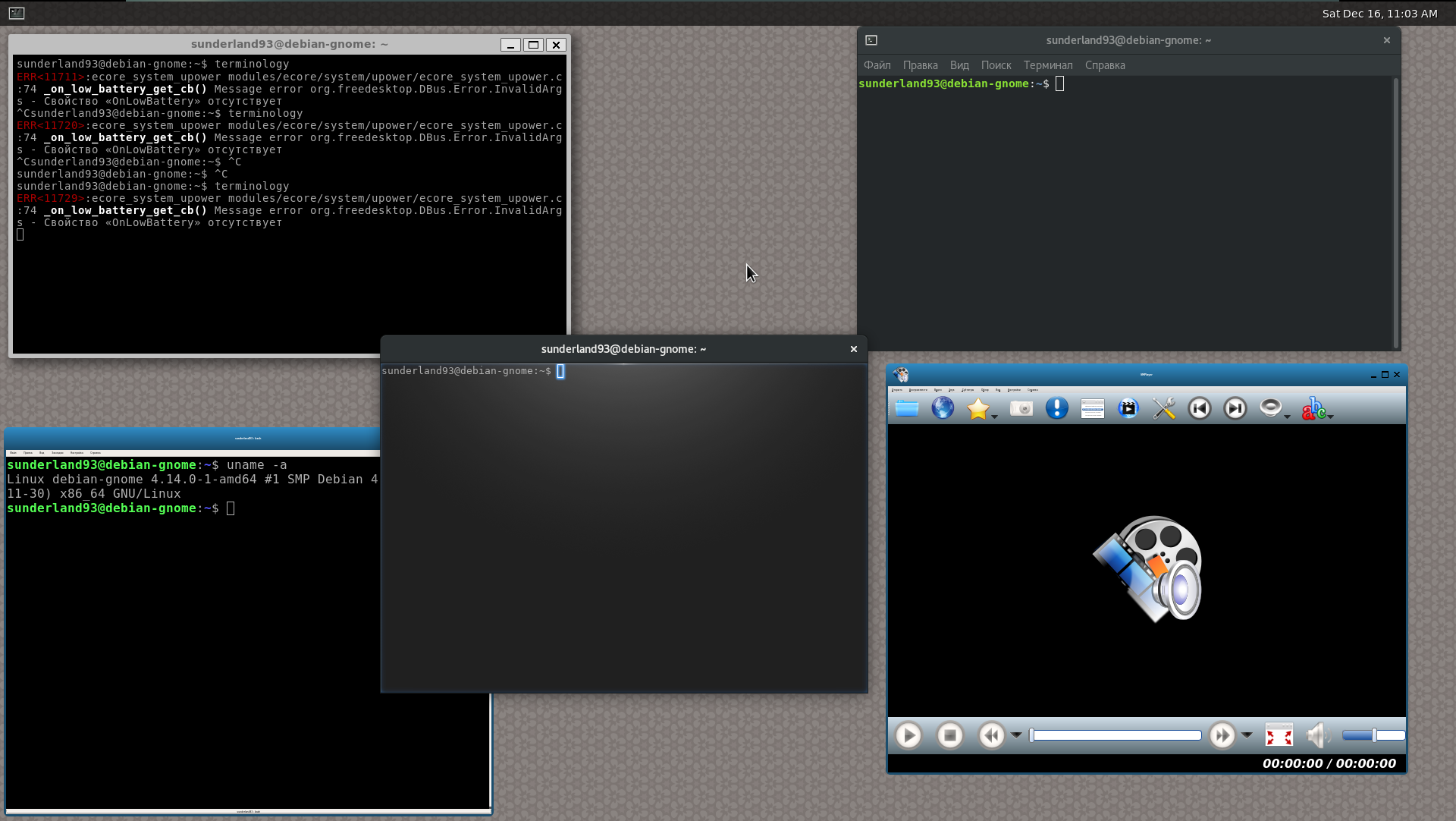 I tend to hear a lot of complaints about gnome projects especially. They’re often described as old, messy, and hard to work with

It was weird if you didn’t

I think gnome is good! But just for some one who never touched a desktop computer or a really new user (I started linux as meny with Ubuntu and gnome) and iam gonna say it it’s really simple for a new user but as you learn more and want to do more it becomes very limiting and then you really understand it’s designs flaws when you see other desktops and how flexible and customizable they are

but that always comes with a big asterisk in this era of planned obsolescence where companies can pull products from the server without any recourse. If Qt wasn’t privately owned then it could be the definitive choice for open-source projects

Ok, I think I understand. Client-side decorations are a separate thing from server-side decorations which are used in desktop themes and such. Sounds like they can be useful for application specific purposes, but can create problems if used in the wrong places. Or is this an all-or-nothing kind of deal?

I didn’t know about the KDE Free Qt Foundation. That’s awesome to hear. I wish there was something like for all software applications and video games.

they can be useful for application specific purposes, but can create problems if used in the wrong places.

That’s really a good explanation yes csds as alot of tools and be very useful but they have a very small actuall use case I can’t think of many places that they can be helpful instead of ssd but if they were implemented better and were easily togglable and theamable (togglable csds are possible Firefox implemented one!)
I can see them as a grate fall back if somehow your wm fails to show ssd you will have something to do your work (or maybe some people idk why but will prefer them) and yes there can be some specific uses for some programs and that’s absolutely Allright

I didn’t know about the KDE Free Qt Foundation. That’s awesome to hear. I wish there was something like for all software applications and video games.

Dam. For a gitlab thread, that got heated.