I read a response on the forum on a similar question that Synfig is not meant for drawing, so there is not much support for graphic tablets, but many people seem to be able to use them, so I was wondering if you guys could help me with this issue?

The tables “works” but only as a mouse of sorts. I can move the cursor, click and drag, but there is no pressure sensitivity and the faster I move the cursor the more “straight” the lines (even if I am drawing circles) becomes, as a vector trying to connect two points.

The tablet is a Huion Inspiroy Q11K v2 and works perfectly with Windows Ink in all other applications I have tried it in.

It doesn’t seem that the Studio even detects it, since it doesn’t show up in input devices. Also, for some reason, whatever change I try to make to the settings of input devices gets reset the second I click OK. This is how it looks and it won’t let me change anything: 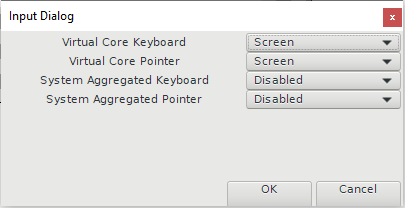 I also tried deleting the Synfig folder to force new config files, but no dice.

Did you try this:

Here’s my recipe for getting my XP-Pen Deco 01 graphic tablet kick started w/Synfig under win7. I have to open Synfig by double clicking on the application icon with the pen. If I use the mouse, then Synfig seems to ignore the tablet. (“No input device found”) Select File, Input Devices. Hopefully Wacom tablet pressure stylus will be listed (or something similar). Just selecting that with the pen seems to kick start the program to recognize Pressure, X tilt & Y tilt (otherwise, I only have 2 in…