Hey, again, I need to trace this keyframe image for scene 05. In this scene characters are not animated. Like in scene 14 - no colors for now, just black lines and white fills. Shading will be added later.

I’ve put Ivan’s hairs onto separate layer, so it will be easier to work with his face. His hairs are quite messy, but I will be happy if you will be able to represent that mess with synfig shapes. Though, it’s not trivial and could be not possible. Anyway, good luck!

Ok, I’m trying to do this one. Except I missed the “no colors” warning… I’m shading Ivan with solid, but unshaded, colors, and it doesn’t look half bad.

I’m attaching a copy of my work in progress. I’m still learning how to trace with Synfig, so please tell me anything that could be improved (as well as what you think of the overall quality of my work).

Note: the head is a placeholder, and the right arm might need to be redrawn.
05-ivan-morevna.sifz (31.3 KB)

The reason for just flat image with not colors is because it is going to be printed and shaded again by hand for a later shade in synfig.
Good luck.
-G

First of all, thank you for working on screenplay translation! This is a great help to the project!

About the traced scene.

The source file is structured well, I was surprised to see your method of coloring black lines. That was new to me.

The first thing what I see is an almost complete absence of sharp corners.

Try to catch the textile flow. Don’t try to make whole area with a single shape. Use muiltiple of them! Connect vertices with “Link” or “Link to BLine” functions. 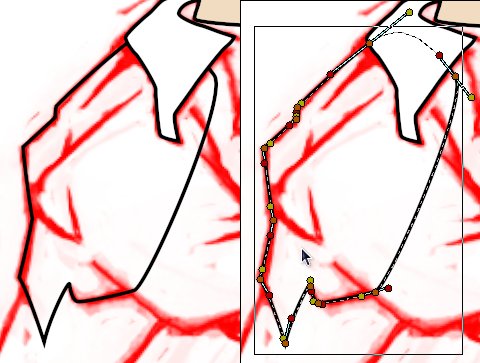 After that play with width. This allows to add some depth. (Note: Generally in anime variable line width is not usual. But here we dealing with almost static image and I want try to make a little candy from it. ^_^) 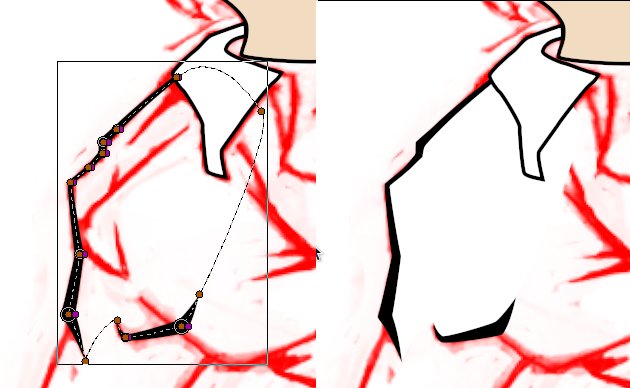 After that Im tracing other parts. On the picture below shown what I use transparent mode to fit line width and “Link to Bline” to connect regions together. 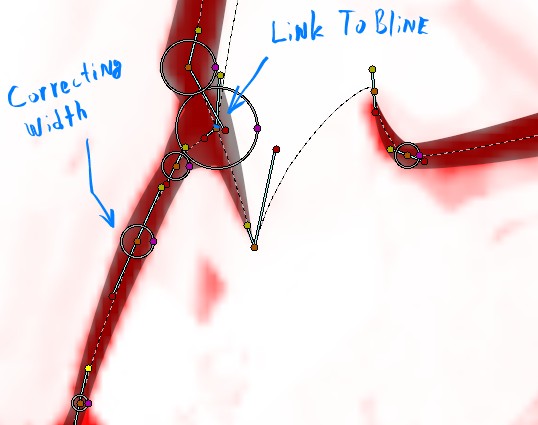 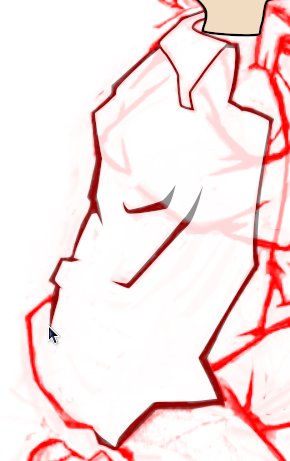 Thank you for replying!

Apparently, I still have quite a way to go before becoming good at tracing. As for width, I purposefully left that for later on all but a few layers.

I tried the file you attached, but I think it’s the wrong one. Everything’s identical to the one I have… Is that how it’s supposed to be?

That’s strange… file is different for sure. Can you check again?

Yea - my bad… somehow I must have mixed up the two.

Oh, I know… I accidentally opened a .sif file instead of sifz…

One more thing I want to mention: the approach I explained above is just one of the many possible and it’s not a dogma. It’s not necessary to strictly follow it if you will find your own, which gives good results. Thanks for your help!

I still haven’t redone the left side of Ivan’s body. Something in the lines is confusing me. Did I correctly interpret it correctly the first time?
05-ivan-morevna3.sifz (150 KB)

But genete is right about Morevna’s cranium size and shape.

Second: thing at Ivan’s sleeve is a little confusing: 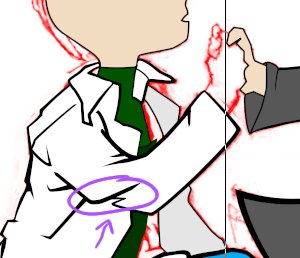 On the picture below I tried to expose the cloth flow, clarify lines and show one of the possible ways of tracing left jacket with regions. I should repeat, what I do support the idea when cloth is constructed from multiple regions following “cloth flow”. I liked how you traced the Morevna’s topic. 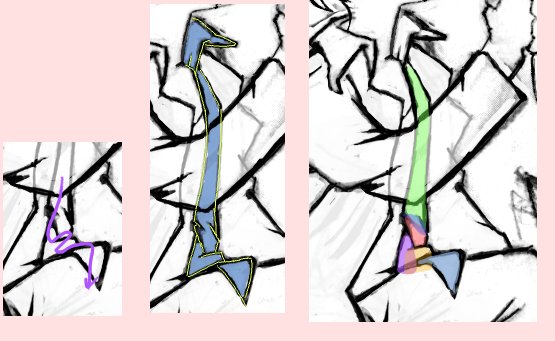 (I have a theory what tracing cloth like this could make it more animatable. Not checked it by myself yet, though. And this shot is not the case anyway.)

Thank you for your comments! I’ve learned a lot.

Attached is my third Work In Progress. I’m essentially done with clothes now… just hands and faces left. Morevna’s head is just a placeholder; I agree that it needs to be enlarged. Also there’s the katana. I believe that’s a blender model, right?

In the mean time, Genete’s already traced two whole keyframes - how wonderfully slow I am! Sorry about that.

Additionally, I want to thank everyone working on Synfig - it’s truly an amazing program (now that I have reconfigured the UI to fit my needs).
05-ivan-morevna3.sifz (206 KB)

Yes, but it should be traced too to get resolution-independence. I’m used 3D model because I’m lazy in drawing. ^___^

In the mean time, Genete’s already traced two whole keyframes - how wonderfully slow I am! Sorry about that.

Hey, don’t be frustrated, it’s OK! Genete is one of our wizards in synfig. Practice is the only recipe. You will soon notice what you handles such tasks faster and faster.

Thank you for your hard work!

Unfortunately, I’ve just about reached the limits of my tracing abilities. I’ve tried to do the rest of the image… but I’m not satisfied with the results, especially Ivan’s hair.

As for their handshake, would it be fine to import the hands from shot 4?

If it were my choice, I’d also import the katana from blender. (I guess I’m just being lazy here)
05-ivan-morevna5.sifz (228 KB)

IHMO you should try to use less blinepoints when trace curved shapes. For example, Morevna’s ear can be perfectly traced with 4 bline points instead of 8. Control 8 blinepoints in term of curvature and width is very difficult and takes log time to fine tunning.
Also, if you’re going to trace with variable line widths, don’t do it at the beggining. Just trace all the image, clean it, removing unneeded points and adding the ones you need for widths and then, after that, add the widths.

For Ivan’s hairs you have to put the laziness apart. There is not other formula. Don’t leave uncovered parts of the head, even if they doesn’t appear in the original drawing. Also it looks much better if you use a region/outline per hair part and overlap them by its neighbors. See demo 14 for reference.

nikitakit:
OK, I’m taking Shot 05 to review. Please be patient and stop editing the file so we will not have troubles on merging changes.

I’m waiting on this shot, but I’d like to incorporate the hand model from scene 4, and maybe a few other edits. I don’t mean to rush you, but if you aren’t making any edits right now…

On another note: Glad to see a snapshot out there! I’m wondering, what is that black square, about center-screen, on scenes 1 and 5?

I’m wondering, what is that black square, about center-screen, on scenes 1 and 5?

It is part of the camera widget. It should be removed on the final render.
-G

I’m waiting on this shot, but I’d like to incorporate the hand model from scene 4, and maybe a few other edits. I don’t mean to rush you, but if you aren’t making any edits right now…

Hi! I’ve made all corrections on Ivan’s jacket done. And some (but not all) corrections to the legs. These days I’m terribly slow, sorry.

In general I don’t see significant errors in tracing itself - there is just a need to follow draft as close as possible. Right now I’m taking a break from shot 05. Please continue further. I don’t like the idea of incorporating hands from shot 04 to shot 05 - the hands looks better here for my taste.
05-ivan-morevna-06.sifz (233 KB)

I think this is about as far as I go tracing this scene, unless I get a sudden inspiration.

No major changes, only a few minor touch-ups. The hands didn’t work out too well, but I think part of that has to do with the lineart.
05-ivan-morevna-07.sifz (232 KB) 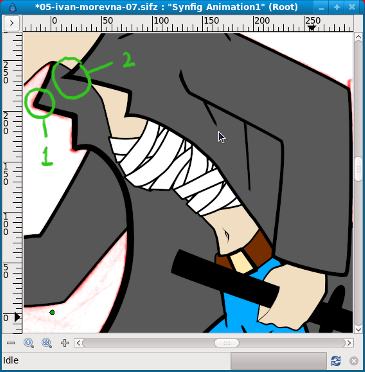 Sources are committed to git.