Well, it is a 2D animation package, right?
No free lunches or shadows here!

Sorry, I was apparently sleeping when reading through the thread…

Today, early, I talked with Genete about the Synfig tools; and I mentioned that I did some drawing tests with tablet for the short movie; Well I did not use this file, so…I decided to share it with you, first the screenshots:

Ricardo, I have a small suggestion:
The ‘corpo>tronco>tronco>tronc’ outline should be over both ‘tira’ paste canvases. Remember that outlines can be placed anywhere in the layer hierarchy and they still connected to its region.

This is the result: 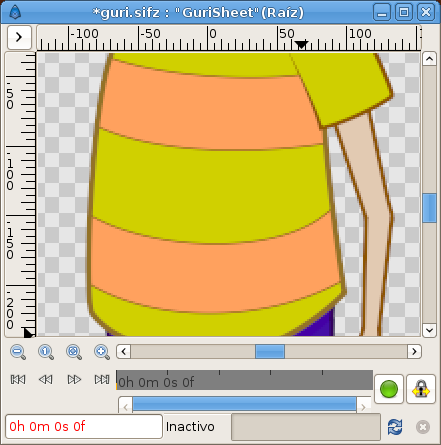 Thanks a lot Genete! I didn´t know that!
I am working hard here! This weekend I´ll post the news about the short movie.

This weekend I´ll post the news about the short movie.

Hey guys, I could not post in the weekend; I was too busy!! Yesterday a little progress, I’ve made a window opening ( only one window, there’s another one ). The technique was:

Well, I’ll try to work more this week ( the last one was unproductive ).

Hi guys,
I have a doubt…how can I invert an animation? I did this scene, take a look:
This is the first frame:

But The windows must open and not close. I did then closing. Any idea to change this other without editing the millions of waypoints again?
Thanks again!

I don’t know the answer to your question, but what you’re doing is looking good so far! I’ll be curious to see if Synfig has a reverse function yet. If not, it’s definitely something to add in down the road.

I got the answer via Freenode with Pixelgeek. Just download the .tar.gz file link in the post and you’ll see. We need to use a timeloop layer with a negative value in the duration parameter.

Hi Ricardo,
I’ve made a screen cast of your animation being played in my pc. Check it out here:

I have some comments on your file and the solution for reverse an animation:

As you can see in the attached file one of the window’s doors is playing properly. Notice how I converted the Offset Time parameter to linear. To play backwards at same speed set the ratio parameter to be -2s. It will delay two seconds of time per second of real time passed so 1s - 2s = - 1s what is the desired action. To let it play again normally just set the ratio to be 0s. Of course you have to tweak the displacement parameter to match the proper start and end loop. Look at the numbers and you’ll understand.

Do you dare to repeat the same with the other door?

Here are the files corrected:
cen+objetos.zip

I´ve download the file, nice solution. Some questions! Can I?

– I noticed that your screen cast recorded a nice playback with synfig. Is it another improvement of synfig or… you are using a very-super-mega computer to have this nice playback performance? I use a dual core with do gigs of ram ( dual channel ), and a nvidia graphics card with 512 mb of ram. ( my playback is poor ).

– How can I compile this version of synfig?

I´ve download the file, nice solution. Some questions! Can I?

I’m not absolutely sure on that but I think that you will so lots of render tests and you have to change it to a reasonable size each time. It is better to change it only once when the final render is done. Even much better if it is done using the command line interface, because, have you tried to render a 30 seconds animation to HD with lots of effects? it will take “some” time that makes not sense to do it using synfigstudio, specially knowing that manipulate synfigstudio meanwhile it is rendering causes bad render output (and this is a known bug). So the smaller, the better for production. Final render: use CLI.

Bitmaps must be created in the final render size to avoid pixelation obviously. If you insert a 480x270 bitmap and render to 1920x1080 you’ll obtain pixelation as you can imagine. Anyway it is better to work with small bitmaps during production and then change the files (not the sif files but replace the original bitmaps) with the hi res ones at final render stage. Again, the smaller, the better for edition.

– I noticed that your screen cast recorded a nice playback with synfig. Is it another improvement of synfig or… you are using a very-super-mega computer to have this nice playback performance? I use a dual core with do gigs of ram ( dual channel ), and a nvidia graphics card with 512 mb of ram. ( my playback is poor ).

I have a high performance computer yes (quadcore 2,66 GHz, 8 Gig DRR2 1000 RAM nvidia 512 MB GeForce 8800 GT) but I think that during playback it only uses one core. I’m absolutely sure that synfig doesn’t use (at the moment) any API form the nvidia. What I did was to disable all the effects (I set the display quality to 10 (the quickest). It helps a lot.

– How can I compile this version of synfig?

The synfig version you saw in my screen cast is taken from the git repository where we have migrated recently. You can obtain your own binary by following the build instructions. Anyway I think that Zelgadis has packages for the cutting edge version with all the features included and he post the links to those binaries from time to time. Anyway, follow the build instructions and put here the problems you have.

Waiting to see the whole animation!

Hi folks, I’m back! Yes, I did a pause with my animation project because I did a “fusion”, between my company ( Ricolandia ) and Quadro-Chave. We were studying these last months about the Synfig and Blender ( a lot!! ); and we decided to produce a new animation to test all of our study. We are producing a short movie based on a tale, a braziliam tale from a great writter.

Well, I am posting here because we decided to publish all these “study” as templates and tutorials; so, Next week… probably we will post the first template with it’s tutorial. This first one is about “bones” in synfig. Not exactly “bones”, but a kind of “bone” hierarchy to control characters easily. This tutorial will show how to use the template and it’s features: bone hierarchy and Library of objects ( heads, hands, mouths, etc… ). I wrote this one.

The second one is about particles ( written by Henrique Barone ). The particle templates ( smoke, magic sparkles, explosion ), will be posted with the tutorials too. So, we are getting progress, a lot of progress with Synfig. The animation has a dead line: April/2010 and after this short movie, I’ll come back with this one here.

So, for now that’s it. I did not give up or stopped anything. Now, after the fusion, we are all in Quadro-Chave ( Ricardo Graça, Henrique Barone, Leandro Ferra ).

My site: ricolandia.com, still exists as my personal things.
Here, a screenshot of the Template file: 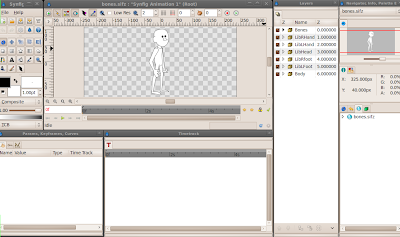 I’ve already written the tutorial, and recorded ( with recordMyDesktop ), five parts of six. Tomorrow I’ll Record the last one file.

Thanks a lot about the patience and …get prepared! We are giants now!

Awesome! Looking forward to seeing it!

We were studying these last months about the Synfig and Blender ( a lot!! ); and we decided to produce a new animation to test all of our study. We are producing a short movie based on a tale, a braziliam tale from a great writter.

Woah! It is a great new!!! I would like to do an article about your project as another Synfig featured film case! Later I’ll post it on synfig.org. Please give us more links and info about it!
-G

Great job!! that will help the community a lot!

Whoa, particle templates. Now THAT’S what I’m looking out for most!

As promised, the template and the tutorial about " Bones " in Synfig. First, I would like to thanks all the community, all forum members and all IRC members; this knowledge is part of everyone.

We wrote the tutorial in a PDF file with all the video links ( stored in vimeo ). The tutorial was written in Portuguese and translated to English; so I´ll post the two options here, ok?

Note: The next one will be about particles, and an integration ( developted by Henrique Barone ), between java and Synfig, yes…a lot of possibilities!!!

Genete, I’ll prepare the files and roadmap about the shortmovie with all the research we are doing; so after that, if you want, I can send all of it to you, so you can open a new topic of if, maybe.

We have an article in the Quadro-Chave site: www.quadrochave.com for the tutorial , and we are rebuilding our synfig-br.org site to store all these files in portuguese here.

That’s if for now! Thanks!!

Ricardo, whoa!
I never thought that you were going to use the cutout concept I wrote on the Cut Out tutorial. I strongly recommend to use the Group feature to select the rotations layers in a shorter way as explained in the tutorial.

Ricardo, I’m looking forward to improve Synfig in all the aspects that make it better for that kind of workflow that you and other professional animators are doing. You have talked about Synfig limitations. As a Synfig user I’m aware of lot of them but I need to listen your voice too for the potential solution alternatives for those limitations. I’m so sorry because lately I’m so inconsistent on working on Synfig and I just work from time to time and do not do a good collection of feature requests. As I know you have studied synfig a lot and you know its limitations, I count with you to ask the high wanted features that would make synfig good for your workflow. Some of them are lost in the forum threads, so please if you have them on mind write down in the feature request forum or the feature tracker at sourceforge.

PS: Why you don’t have the icons in the context menu of the layers panel? see image: