I just want to share the progress on my next animation.
It will be my own Spy vs Spy short. I picked this cartoon because I am still bad at designing, so I thought I’ll start with something simple that’s already exists, and Spy vs Spy is perfect for this: simple design, no complex color scheme, etc.

Also, the slapstick comedy is a good start to test my animation and writing skills. Honestly, I am not sure I’ll be able to pull this off, but I will try. Anyway, I made models of Black and White spies (which essentially the same except clothes) and created a simple pic with them:

What do you guys think about the design of the characters? Did I get the proportions right? What about folds on the clothes (oh how I struggled with it, still don’t think it came out right)? It’s the first time I am designing a full character even though it’s not my original design.

Before uploading a full cartoon, I’ll return and post here a little “walking” animation using one of the models just to see how it handles.

What do you guys think about the design of the characters? D

Hi good day, Alfred E. Neuman will be proud of you.
if you want my advice, I think that you could keep it more simple, the original character design are simple and a little more geometric with thin shoulders they torsos are more like triangles, 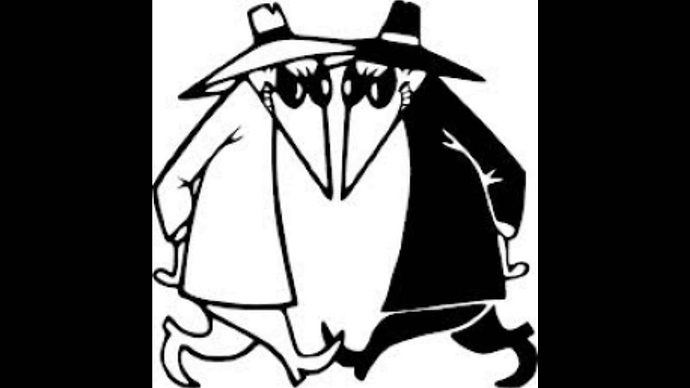 No shadows, no strange angles, and thick line, you can have both characters just for make one of them, just only need invert the color in some outlines and regions of the vector model and you can have some like this: 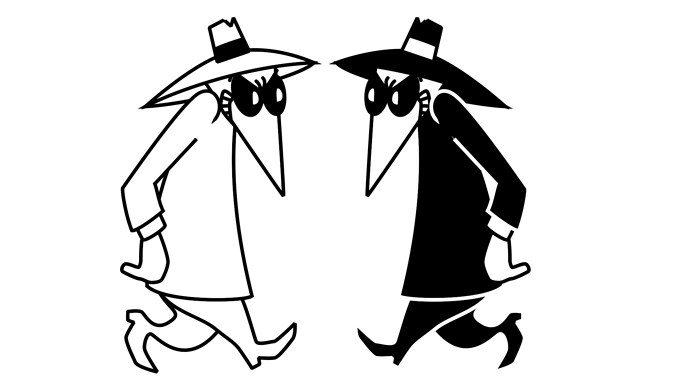 you can change the expressions and hands with some switch groups

Im Working in an animated short too, but Im using limited animation for the moves because the designs are a little more complex (The BG was make using a 3D software) 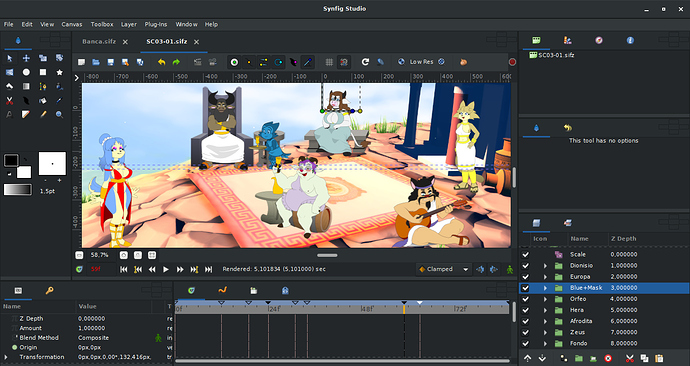 I have the eyes, eyebrows, mouths and other elements of the characters in switch groups or hidden 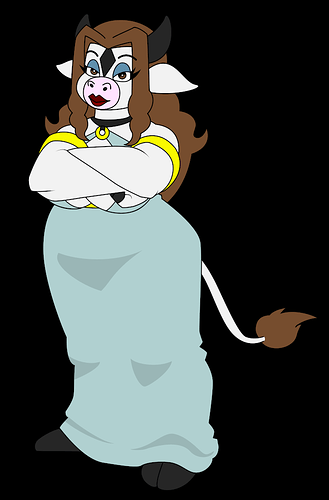 an this one for the walking cycle: Blue-Walk.sifz (130,7 KB) just with making some rotations and displacements of the pivots it looks a little more animated.

Anyway this is just an advice and im talking from the point of view to try to make more using less (limited animation) you have to take the final decision, and if your idea is make some to look more like full animation go ahead is your project and dont feel forced to make changes if you dont want it.

Hi good day, Alfred E. Neuman will be proud of you.

Hey, lobozamora! Approval of the fictional character from cover of the magazine is what I ever wanted!

if you want my advice, I think that you could keep it more simple

Oh no, I am actually leaning towards more realistic design, the one that was used in later clay animations or at least that what I think the models were made from… So I am going to suffer to make it sort of 3D-like and currently I am having some troubles understanding how the light works in general.

Im Working in an animated short too, but Im using limited animation for the moves because the designs are a little more complex

Your designs are awesome! In the future I will try to come up with something as colorful as yours, but that’s for another day. I see your point though, you’re more about cut-out and frame-by-frame animation made from available sets (switch groups), I myself prefer the morphing technique. For example, in my white spy model almost everything is made from two-point outlines for easier animating.

Overall, thank you for your detailed post! I see what you are talking about, but I am going for different approach to make everything as smooth and fully animated as possible. Before animated test I am planning to make one more static image with background and better lighting.

As promised, here’s the last static image before test animation: 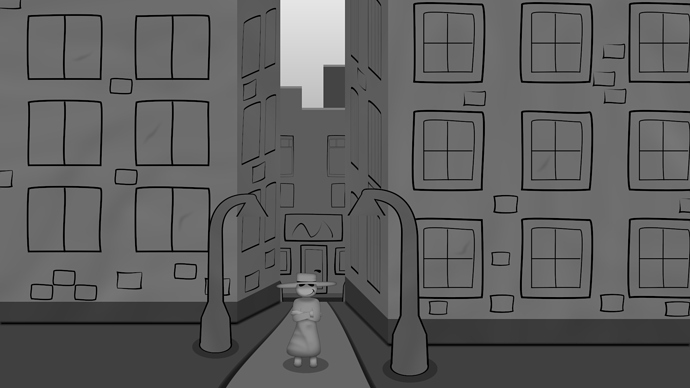 I reworked lighting and made folds on clothes more noticeable and of course added background. I tried to copy the original style, where textures are simply painted on the piece of a cardboard I believe, so yeah, it’s pretty simple.

Still struggling with perspective though, but yeah, this is the resulting style of the cartoon. Feel free to comment if you have something to say about current design.

OK, I made a test animation: https://youtu.be/sVC2OtxtoMk

No music or anything fancy yet. I was mostly testing the vector model, walk/run cycles, different interpolation types and how to arrange sounds using Shotcut.

P.S. Is it me or colors messed up in the video? It’s like there’s a violet filter over it when I am watching it on YouTube.

The running for catching the hat is a bit “hopping”.

P.S. Is it me or colors messed up in the video? It’s like there’s a violet filter over it when I am watching it on YouTube.

For me, it’s all in gray scale.

The running for catching the hat is a bit “hopping”.

Yep, the running circle didn’t come up as good as I hoped for. I’ll try to fix it in a final version.

For me, it’s all in gray scale.

That’s how it should be. It’s something with Firefox 71.0 I am using, in other browsers it looks normal, so yeah, not a global problem.

I was learning how to make a dynamic camera shot and it took me awhile. It’s pretty hard to make elaborate camera moves in Synfig (it’s a 2D software alright).

Anyway, I’ll take a break from animation and concentrate on learning design to make my first character (avatar).

@svarov how did you do such amazing camera work? Is Synfig 2.5D animation software? I mean really that is awesome.

Thanks dude! The camera in the animation above is done in a very convoluted and complicated way. Basically, every house you see in the animation has conversions similar to ones in this thread: Airplane in 3D

As I said above, I am currently trying to design my own character, so I am pretty busy. I am planning to share some of my examples/findings/templates on this forum after I release the full Spy vs Spy short which is going to take a lot of time to complete.