So I’ve been working with forum user Dave Hingley trying to solve a synfig issue, and I think I have a partial solution - I just wanted to run something past you guys. [I’m not an animation guy - that’s Dave’s thang - I just try to help him out with the more technical stuff - do if I get the terminology wrong, appologies]

Dave has been interested in producing what I would describe as animation rigs for characters in an animation. Each character is a self contained sif file. He’s set up canvas elements with replacement heads - this allows him to use a ‘head’ swapping approach to animation - but it could equally be used to swap mouth shapes for lip syncing.

The main issue Dave was having was that he had a bunch of layers - and when he clicked the head layer he was able to pick one of the canvas elements to be the head. So far so good. Then then encapsulated the layers with a character layer, and the head stopped working.

This works fine. I save it away - no worries.

so I’m not sure what’s wrong with the file here. Anyone got any ideas? Would this be a bug relating to canvas references? I’ll see if I can knock up a test file to show the issue.

Possibly there are circular references there. Can you provide the original file and a recipe to reproduce the error? If there are more than one file involved, please folder them and paste the zip of it.
-G

I’ll see if I can knock up an example - the ‘real’ model is quite large at approx 6mb, but I’ll ask Dave to knock up something smaller.

To reproduce this issue, all I need to do is load the robot file up, then save it as something - even over itself, and I get the following error message when I try to re-load the file synfig has just created. 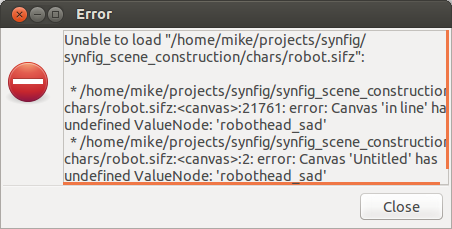 not sure if this is an issue with the way files are saved, or when the file is loaded - will try an generate a diff for it.

Have been able to determine that if you save the file having just loaded it, it seems to do quite a bit of conversion - in particular it seems to convert the reference canvas layer from this simple line :

and appears to resolve the canvas :

The problem is currently defined in a bug not solved yet. It happens when you’re defining a exported canvas that uses other exported canvas and viceversa. Currently it its not smart enough to save the composition without the circular reference and then it is unable to load it after.

This is a bug and it is not fixed yet.

You’ll need to rename the xxxxxx.sifz file to xxxxxx.sif.gz and then unzip it to xxxxxx.sif before inspect the file in a text editor, because you can’t save it to sif using Synfig Studio in this situation.

Edited: the above quote was fully wrong

This is another kind of bug.
Looks like when you use a Reference convert type over a Canvas parameter, then the referenced canvas is replaced by its ID when saved but it doesn’t know how to load it back.

I’ve fixed the V1 file to the V2 file by replacing the Canvas Reference convert type in the visible head of the robot by a direct Canvas usage. Now the file can be loaded and saved with other name:
v2_robot.sif (1.15 MB)

Steps to convert the V1 to this V2 version:

The workaround you’ve come up with is quite good, and simple to implement. I do like the way that the canvas references work - I suppose this works too - but the UI seemed to have better support for reference canvases.

Dave is planning on using this technique to do head swaps for a character over time to allow lipsyncing etc.

Do I need to raise a bug regarding this, or will it be covered under the existing bug for canvas references?

I’ve even contemplated grabbing the sources - I know it’s C++ (i work in .net mostly) but It has tempted me to see if I can debug this.

Yes, please file a bug with they problem to fix it in the future in one way or other.
synfig.org/issues/thebuggenie/about
-G