I just couldn’t save this project because it was saying something like could not save in the E:/(location) and now when I opened it it’s saying Unable to load E:/(location) E:(Location): :65535:error:Unknown Exception thrown when working on element “offset” Could you please help it’s kind of urgent .

What synfig version do you use?
Does the location path has non latin characters?
Did you save your file as .sif or .sifz?

I use the latest version 1.4.0. that just released some time ago and there is no non latin characters; this Project was running normally for all this time but today suddenly it just started freezing a bit so I thought I’d just save it but I could’nt save and also after closing didn’t start.Is there a way I can share the project with you?

Also I saved it as .sifz

Did you use a USB stick that you removed since then on this computer or imported your project with a E:/ drive?
(It could be also because of an internal memory card reader) 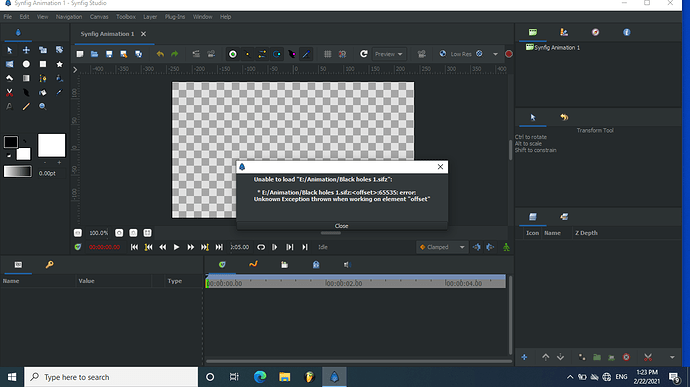 https://we.tl/t-Bbw9UwMRN9 here is the project I was talking about, Could you please help me to fix this
: )

I sent the fixed version through personal message, but I had to delete animation from 177 seconds to 180 seconds. You will have to reanimate that part.

Please, backup your work periodically and split your project into separate scenes (each scene, different file) because programs have errors and even if they didn’t, there’s always external factor like sudden power loss, for example.

You may not be so lucky next time and losing project that 5 minute long would be quite depressing.

Did you notice anything that could be the reason of the problem?

No, because Synfig doesn’t report erroneous line properly. See on screenshot above? It says 65535 - it’s not the line with error, the actual error is somewhere below in sif file. It’s like Synfig stores the line number in short int, because 0xFFFF = 65535.

And the project is huge, around 20Mb, so I didn’t bother looking for error manually. What I ended up doing is I removed all keyframes and waypoints (I have Perl script for that) and project opened. Then I just shortened the range of what waypoints to remove until I got the range with error: somewhere from 177s to 180s and deleted it.

I cannot express how thankful I am to you but still THANK YOU!!

for your help @Svarov and everyone who helped me; and yes I’ll take care of what you suvgested me and I’ve already started saving a copy file like you said; honestly this is the beauty of Synfig community that we help each other in such short time and how we encourage people like me to work with animation; I’m feeling so happy that I chose synfig!

(I have Perl script for that)

provide a way to uncompress .sifz for user investigation

I am gonna make a bold statement, but majority of Synfig users are artists - they aren’t tech savvy people. Shoving XML in their face when something’s gone wrong isn’t very… user-friendly. What are they gonna do with plain XML? How they should know what to fix when sif format is mostly undocumented?

Try this strategy of remove keyframes/waypoints

It’s just a one thing that can go wrong. This is actually the first time I see this kind of error.

Try to check for bones/skeletons with broken links

And if so, delete it? I guess it’s better than having a broken file, but still a pretty cumbersome workaround.

In short, not a huge fan of the idea, because the result will be a half-working solution.

On my Ubuntu 18.04, opening the file throws an exception on a “point” element instead of an “offset”.
Not having the same error could be because of differences in memory management.
The file is for sure too much big and complex, maybe it has been corrupted during an autosave (I always deactivate it).
Removing some Scene group layers, I obtain “A waypoint already exists at this point in time”.

And from what I have seen, it would have been such a waste to lose all this work