Launching Synfig results in a series of error messages with errorcode “R6034 An application has made an attempt to load the C runtime library incorrectly”
msdn.microsoft.com/en-us/librar … 60(v=vs.90.aspx indicates that this is due to a missing manifest file.
Is this a bug with synfig? Did someone else also see this problem? Is there a solution?
I am using synfig studio 1.0.2 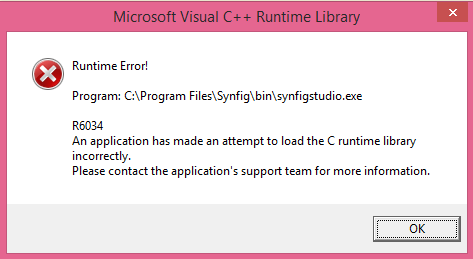 Tried installing the VC package. It did not resolve the issue.

MSDN indicates that the Issue is with the way the package was built.

Did you try to first remove 2008 redistributable from your system before to reinstall it?
Be sure you don’t have any application running 2008 libs at that moment (better to reboot)
Then reinstall from microsoft.com/en-us/downloa … px?id=5582