September '10 - What happened here/what happens next?

As part of the example files bundled with Synfig, there is the background to an unfinished Voria animation. My question to you is “What happened here?” or “What happens next?” Use your imagination to expand the story told by the current image 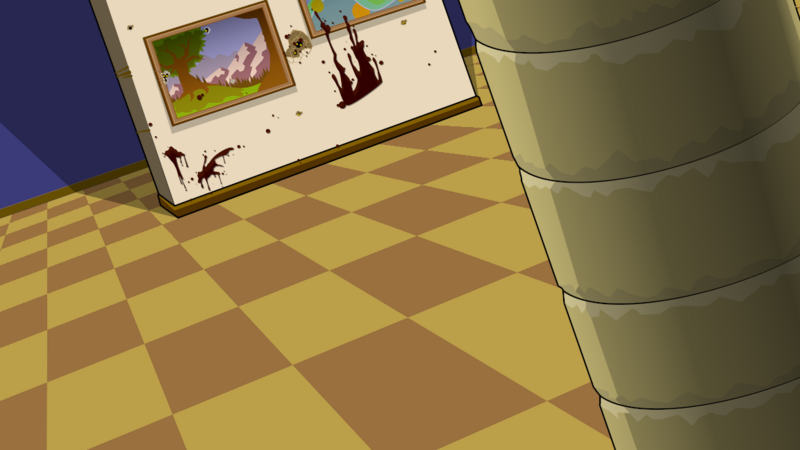 Source file is backdrop.sifz file in the examples directory.

That’s gonna be tough… and hopefully interesting. Good luck everybody!
If you can’t find the examples directory in your filesystem… (i.e. you haven’t installed the synfig-examples package), this background can also be downloaded directly: backdrop.sifz from the Synfig Code Repository

I’m a newbie here and a newbie to your software so I thought I’d add a little introduction to my response to the September 2010 challenge and a few notes about the way I approached it. I figure that if newbies are anything like me then they’ll head for the challenges and this may be helpful for them.

Before I do though, here’s my first attempt at a short animation:

So I was browsing the internet last week and, although I can’t actually remember what I was looking for at the time or why, I ended up finding Synfig and was very impressed. The site gallery and examples looked very good as did the documentation, tutorials and forums which, besides providing helpful info, also led me to the Pencil and Inkscape software.

I’ve always thought that the best way to learn software is to run through the documentation to familiarize myself with options and make mental notes as to where a feature would come in handy and then pick a project and just try and do it. This helps me work my way around the software features. Rather brilliantly, you guys present “CHALLENGES” on your forum and September’s challenge not only looked interesting, but gave me a completed background scene of high quality to play with, discover and learn from. To give you a couple of examples, the backgound taught me about layers, groups, encapsulation, distortion and rotation and allowed me to experiment with hiding layers, blur and zoom.

Before I started with Synfig though, I made a conscious decision to think through and develop an idea of what I wanted to do first. I chose the “What Happened Here?” option and wrote down a very basic outline of what I imagined had happened. Then I took that outline and did a basic script with lines like “Character 1 walks in carrying two pictures and puts them down at his feet” which in later versions became “Jim enters from stage left. There are two pictures propped against the wall.” The second version achieves the same end result but the animation is going to be much simpler for me to do. Simple is good: after all, this will be my first animation.

So, I now have a “script” and I know what characters and props I’ll need so I sketch and design them. I try importing the Pencil sketch into Synfig and drawing with vector shapes but I struggle with the curves and can’t do what I want. I’ve worked with Photoshop and know Bezier lines pretty well so I must be doing something wrong in Synfig but I can’t find how to do it right. Rather than get frustrated, I import the sketch into InkScape, create my characters and props and then import the completed vector shapes into Synfig. This feels better for me and works OK.

The results are rough and I made loads of mistakes but I’ve learned a lot and, hopefully, the next projects will be better.

Thanks to Synfig for the software and documentation and thanks to the forums for some great answers and tips.

If that’s your first animation (wow!), then we look forward to seeing future ones - you know, when you figure out all Synfig’s bells and whistles. This would be a great addition to the Synfig gallery or the next demo reel.

Bravo. This is a very very promising Animation. I’m waiting for your future works.
Congratulations.

Really good in all aspects. As pixelgeek said it deserves a place on the next demoreel.
Morn, did you think about any license to release the source code?
-G

Thanks very much for all your comments guys.

…Morn, did you think about any license to release the source code?
-G

Don’t know a lot about licensing and stuff but Synfig.org is welcome to reproduce and use the source code and finished work.

I’ve put the source code (synfig files and vector graphic files) into two zip file and attached them to this post but, be warned, the files are very messy as this was my first attempt. I ended up doing individual scenes and rendered as I completed each scene. I made loads of mistakes and accidentally deleted some stuff and ruined others and because I was learning as I went along, there’s bits probably all over the place - sorry

Very good work, and the staging of the story is very well done !

Ha! That was great!

Beautiful: nice script, nice cuts and views and nicely done, thanks!
Congratulations on your first challenge entry!
(just added it to the examples repository: synfig.org/en/examples-repository)

Could you please select another frame of the video as a thumbnail in youtube… so that it displays in a better quality?
Berteh.

and thanks Berteh - I’m honored that you’ve chosen to include it in the examples repository.

Could you please select another frame of the video as a thumbnail in youtube… so that it displays in a better quality?
Berteh.

I didn’t realise I could do that but I found the thumbnail options and have selected a better frame. YouTube reports that it may take 6 hours to update.

I found the thumbnail options and have selected a better frame.

worked nice, thanks.
B.

Hi guys. After seeing the work of Morn, I had the following idea (I hope you like it):
http://www.youtube.com/watch?v=BDC5LKXhQkk

Excellent - my character’s worried he’s going to get caught now!

Ha,ha,ha, Thanks, Morn.
Sorry, I forgot to add the file