Hello,
I’m trying to make realistic fur and i decide to make it with plant leyers. For me it’s good but contain a lot of plant leyers and it’s time-consuming, i would like to ask how it look and how to optimaze it.

The image is too small, so I can’t say if it looks OK, or not. You better upload it to some external image hosting in bigger resolution.

As for making fur in Synfig, plant layers is the best choice, but yes, it requires a lot of work, unfortunately. You should create at least 3 plant layers for right/left/top side of the animal and set the right parameters for the layers (gravity is the most important).

Check the attached example.
To make rendering a bit faster, disable ‘Head->head->fur’ group.
To optimize the attached example you may also disable ‘Head->side-fur->blur’ layer, but quality of the fur will decrease.
Also, If you have some drawing skills, you can make a raster fur texture and then apply it to your vector work, it may work a bit faster.
FurEx.sifz (5.18 KB)

I see what you mean but i use other method, i craete a lot of plant leyers and move it a little and that all region is in plant leyers, that make effect of fluffy fur. I attach a file that you can see.

Making noise layer and blur i good idea for fur, but it’s hard to make side fur looking the same as main body fur.

So many plant layers… but I see what kind of effect you’re trying to achieve with it. Pretty interesting. I tried to apply your technique to my example, but seems there’s no way to significantly reduce amount of layers. If you do so, then instead of fur you’ll get just a messy/random texture.

Well, seems like I don’t have any ideas for now, sorry.
I myself would go with raster textures in your case.

I tried to apply your technique to my example, but seems there’s no way to significantly reduce amount of layers. If you do so, then instead of fur you’ll get just a messy/random texture.

That’s the problem i have so many leyers and i try to reduce it, little random texture in this way is good because fur is random.
I don’t think this method will work for your wolf’s head because of high amount of leyers and animating thus would be terrible.

So far i animated it and animating this take too long time.
I think i can improve it by changing settings of plant leyers. I will try do more works and experiment.

I animated each ear with other method and i think the left ear look much better than left.

Man, you’re crazy. In a good way, of course, but animating such amount of layers is a pain.
I am currently working on a fox model, so I am interested in creating a realistic looking fur too, so I watch your progress closely.

I like how fur looks inside the ear. With the right shadowing it creates a good texture.
Oh, and right ear (left from animal point of view) looks a bit better, imho.

A lot impressive work (for both of you) but I’ve got one question…
Why to spend so much time and efforts to produce 3D-like effect with a 2D software when you could use Blender with greater advantages ?

everybody prefer somethink other

i’m not pround of it, i tried to make short fur where skin is still visable, it’s hard to create.

Why to spend so much time and efforts to produce 3D-like effect with a 2D software when you could use Blender with greater advantages ?

I have no idea

For me 2D animation look nicer than 3D

This time i used more layers

I created cheetah walk cycle, it wasn’t very easy but i did it.

I tried use skeleton laeyers but it doesn’t work well with plant layers so i used rotate laeyer and some layer animated manualy.
Still i’m not happy with effect of fur and i will do more animals. I have another idea how to upgrade this and then we will see

Art is good (fur is acceptable IMHO), but animation is clumsy. You got bones and rotation points quite wrong.
Each leg (both back and forward) should have 4 rotation points (4 joints) and you seem to have only 3. That, of course, if I remember general cat’s skelet well.

Here, found some nice reference: youtube.com/watch?v=XYYU1XNupj0
Set speed to 0.25 and watch from 15 second.

First attempt in fur dynamic, i tried to move this fur somehow and it didn’t work.

It was very time consuming and monotonic work, but i learned more and i hope next projects will be better.
I also tried to use skeleton layer but at some point it buged adding some bones that didn’t do anything and next layer with skeleton totally broke so i made it again without skeleton (luckily it didn’t need so many work) 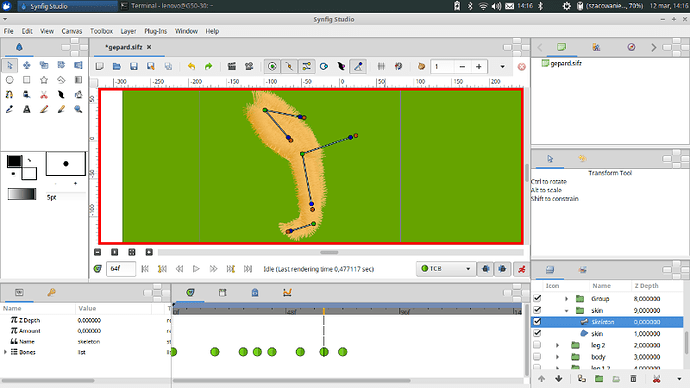 I will try do more and better animations, maybe in sometime it will be nice fur.