A week of self isolation, thanks to my daughter… So I experimented with synfig.

You can also download the sifz for a few of the animations lower down in this topic.

All the work is inspired by the After Effects motion designer Oliver Randorff over on YouTube. 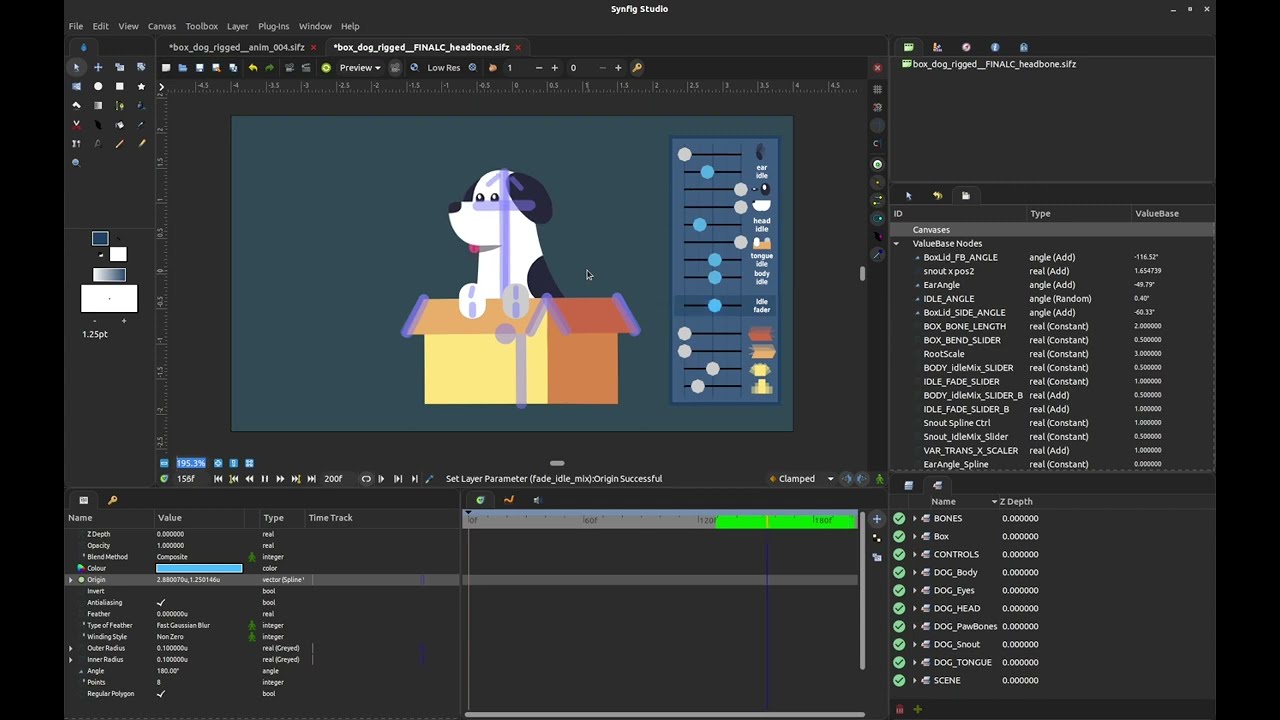 Cool!
You guys are amazing on skills and creativity

First: You can see the preview on the right side before saving post edition

Just paste the URL itself, without link.
Instead of

cheers for that… tried everything else except that LOL

.
I really understand the hard work required to create this animations, it seems that you have created all the artwork in Synfig too, which is amazing, I usually create artwork in Inkscape and then animate in Synfig. These will be helpful for everyone to learn Synfig and understand its use.

It makes me happy to see that Synfig is being used for what it actually should be used.

Also thanks for sharing the files, some suggestions to help you ease your work.
About the dog rig, you can use Slider Plugin which may be helpful for you, also try and experiment with Joystick Plugin

It would be useful if you curate a list of features that you think are necessary in Synfig and order the list based on which features you think should be prioritized by the devs.
I have completed the 100 Animations, and I will start to contribute by improving Synfig slowing, so if I know the important and useful features, I will try to develop them first.

@veermetri05 Many thanks for your kind words, and I will take a look at your slider, and the very intriguing Joystick slider plugins. Totally love the truck rig example.

I can’t see much point using Inkscape when Synfig itself is a pretty competent SVG editor. OK It lacks a few things, but all can be worked around and achieved with a bit of creative thinking. I just look at it as being a more of a non destructible editor, like with using alpha and onto, in conjunction with specific grouping, as boolean modifiers.

Love to understand more about dynamics within Synfig, and that will probably be the next thing to look at, along with coming up with an easier to understand parallax/multi plane camera rigs… a very quick parallax rig idea is at the end that video, which has variable speed control, except speed did not work the way I thought it would, so when slowing it down It actually rewound the procedural loop till it got to the desired speed, but that could be to do with my logic.

Hope the Devs just stick to practical things, and get the basics sorted, rather going ‘pie in the sky’ and trying to add something over the top, a lot like some things I’ve seen posted around… they’re all great ideas, like auto inbetween (again simple morph mixer first guys) or 2D motion silhouette capture, but OTT. Look at better, easier for the user to implement, constraint tools, inverse kinematics, perhaps a dope sheet editor for easy timeline adjustment. things an animator/motion designer would totally get in to.

When I have the time, I’m slowly working through various aspects and I’m sure there be a lot more thoughts to share.

Can you provide more info about it ? I didn’t find anything proper information, any videos or articles on this topic would be useful.
Googling morph mixer gives some information will give some 3D examples

So far I’ve been able to create a 3 phase morph which allows me to morph from a base pose to 2 corresponding shapes and mix between, but there was a lot node linking work involved to make it happen

Slider Plugin or Joystick can interpolate between any given parameters(angle, real, integer, vector)

, so it can also interpolate between poses/states.

I really need to look at your slider and joystick plugins to see if they’re like, or better than, the After Effects equivalent name sake. But looking now at one of the vids you posted in August '21, it maybe exactly what I’m looking for… just need to have a bit of free time to look into it.

Apologies for some of my terminologies… It will get mixed between 3D and 2D apps.

Also is there an easy way to know If I have the most recent versions of the plugins created for synfig? A centralised repository?

it’s totally what I need… Synfig really should have these plugins as part of the default package. Now I wonder what other plugins are just lost within the forums and are not being packaged or not getting attention they truly deserve.

I’m going to sit down and put together a mouth/lip rig as a test first, then go back to a character rig idea I was playing around creating last week.

Amazing!! I like what you did with the box flaps and how you set up the rig controls.