Hi!
I’m having a problem with the influence region of the bones when I´m trying to rig a character with bone automatic linking. I downloaded a very well rigged character from here: youtube.com/watch?v=P65_ACqWxbQ. I have tried to follow the tutorial’s instructions, but maybe I am missing some step, so here is the process I follow:

P.S. By the way, I’m sorry for any grammatical mistake, my native language is Spanish (as you can see in the images). Thanks again!

This is one of my problems too.
I have more than 70 incremental backups made while attempting to work round the difficulty.
I see that this was reported some while ago but I would enjoy hearing if there is a better solution to one I have developed.

My current idea is that, apart from v1.2.1 (and v1.3.10) being a little unstable under Windows10 (it’s what I have available to do the work on. don’t judge me) I have to put all shapes to be linked directly under the skeleton in the same group - no sub-folders for the parts - and then to select all layers involved in the layer panel before selecting all nodes and bones needed on the canvas, right-clicking a node of an affected bone and selecting ‘link to skeleton’. 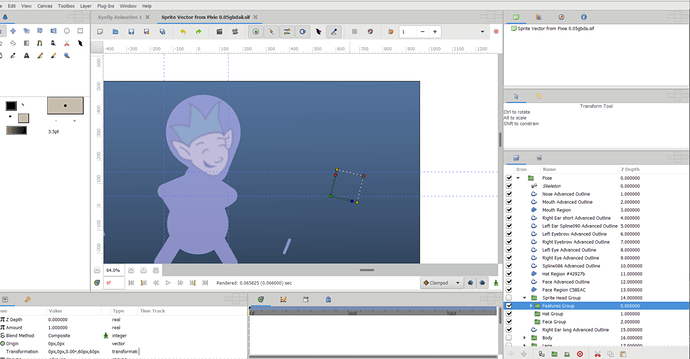 Frankly it is a complete pig to implement when you just put everything into folders and have to take them out again to make things work. Synfig Studio also crashes a lot when you grab a layer, accidentally switch on editing of the name and then try and move the layer. I learned not to do it now ok?

I had an idea that if an area in a group had been moved or realigned using the group’s controls, Synfig Studio might see it as outside of the area of the influence rings, even if it looks like it’s inside them but I haven’t tested this yet. Four days into a two hour project I don’t have the time. It just looked like that could be what was happening from the nodes that stayed highlighted.

If somebody has a better way to handle this or an explanation on how I’m getting something wrong that works most of the time I would love love love to hear it.

I also love Synfig when it gets its act together. Keep going and do your best.
SAL