Hi!
I encountered some png rendering issues while rendering the attached image. The rooftops of the toadstools seem to have squares and vertical lines in them. Rendering to cairo png did not solve the problem. I am using Synfig 1.02 on Lubuntu.

Hmmm, I can’t see what you say. Maybe you can:

Hi G!
I attached a close up render of the problem. As you can see the red top of the toadstool has orange lines in it forming a square pattern as if it is badly interlaced, but only the red color on the rooftops has it.
Greetz! 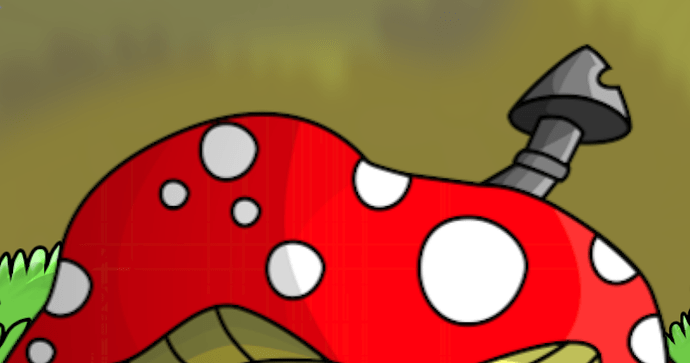 Or I’m getting old and can’t see what you mention or the image is perfectly normal…
Can anyone else see the artifacts?
Can you spot with an arrow on the image where is the artifact?
-G

esp for the old people amongst us

The first drawing with the white background does not have any artifacts.
The second drawing with the brownish background has vertical and horizontal lines in the red color that are not supposed to be there.
Spot the difference.
The workflow is: make complicated toadstool vector drawing in Synfig (drawing one). Render it to png and import the png back again into Synfig to make a new scene (drawing two). And then suddenly all the imported png’s get artifacts like the second drawing. You can spot the artifacts on the canvas and they also get rendered onto the final rendered file as well, which implies that there could be a problem with the initial render to png, right? 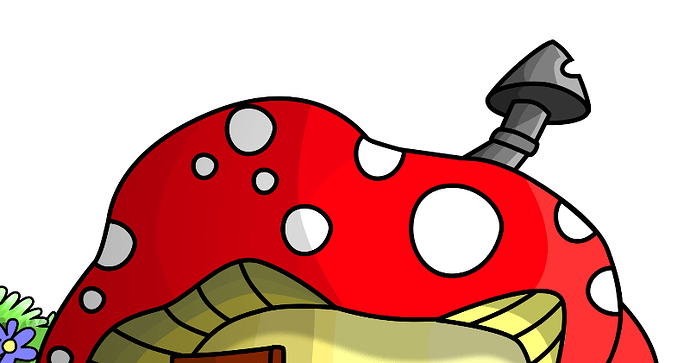 Hi!
Last example. Left drawing is vector with no flaws. Right drawing is png render of the same vector and imported back into synfig. When you put a color (in this case white) behind the two drawings then the color creates horizontal and vertical lines in the red color of the roof of the toadstool of the png file on the right. Work around: make a copy of the png file and put a solid red color layer, set on multiply, above it, group both layers and put the group under the original png.
Greetz! 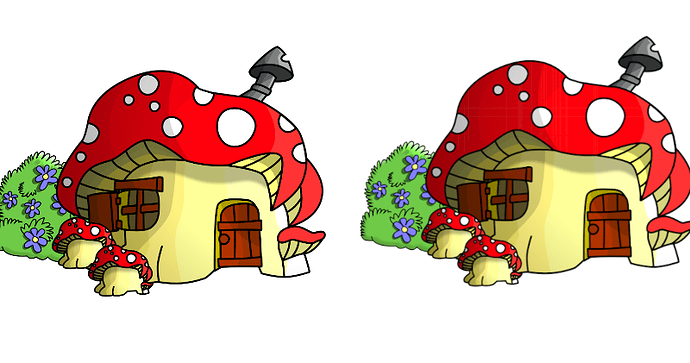 You can spot the artifacts on the canvas…

Aha! It is not necessarily a png render artifact but could be an image import problem too!
Can you spot the artifacts on the exported image using Gimp for example?
…
I finally could see the artifacts. It was an exercise of vision concentration, like the 3D shapes that appears with the famous Magic Eye images…

…
Interesting effect. What could be the cause?
Can you test the same with an older version of Synfig Studio to see if it has been broken somehow in a recent version?
-G

Hi!
Did some further experimenting. The artifacts were not visible in Gimp. I took the original vector file of one toadstool house and rendered it three times to png. One time on automatic in the target setting, second time I choose PNG and third time I choose Cairo-png. The first and second render had artifacts when I reimported them into synfig. The third one, the Cairo-png, did not have any artifacts. I also tested it on several different laptops and the brighter the screen the more clearly you could see it, hence the fact that Genete did not see anything in the first place.
Greetz!

Look like to me to the Alpha brighten or Alpha Darken blend method bug … i don’t either know if this one is reported on the bug tracker ?

Could be the gamma hard coded to 2.2 bug (if there are “blurring effects” in his png)