Hi! My friend and I are trying to make an animation and found that the newest build of Synfig allows the use of Papagayo. Which would be great if I could actually move our mouth drawings into the specified folders that the .pgo file created! For some reason I have never been able to click and drag groups/objects into one another so that a group encloses something. I have only ever been able to work backwards by importing things I wanted to group right next to each other and then selecting them all, clicking ‘group’. But now I really NEED to put things into these folders, and it won’t let me. I can’t even copy and paste the files into the specified mouth groups, as when I press ‘paste’ while having the group selected it pastes it out of all groups and not inside the one I had selected. Clicking and dragging like I see everyone do on the tutorials just won’t work for some reason.

I use the Mac version of Synfig. Is this the problem? Yet literally everything else I have tried on the program works. Am I doing something wrong? PLS HELP!!!

Hi!
I use Synfig on both Lubuntu and Windows 10. On both systems I can drag a group with content into an empty group. Bug in the Mac version?
Greetz!

Thanks for your reply,

If it is a bug that is incredibly annoying, as it basically renders Synfig unuseable!

as when I press ‘paste’ while having the group selected it pastes it out of all groups and not inside the one I had selected.

No-no, it doesn’t work that way. Try this instead: copy the desired group, then expand the group you want to paste the copied layer to, select some layer inside expanded group and then hit paste button.

Try this instead: copy the desired group, then expand the group you want to paste the copied layer to, select some layer inside expanded group and then hit paste button.

Hi!
That does not seem to work in this case either. When you import a pgo papagayo file, Synfig creates a sound layer and a switch layer. The switch layer contains empty phoneme folders in which you have to drag your own made mouth shapes. I say drag, because dragging your own mouth shapes over the folder in the switch layer is the only way of getting them inside the empty phoneme folder. If you made a mouth that has the form AI then you should drag it over the AI folder inside the switch layer. You can not copy and paste it. Since dragging works on windows and linux, but not on mac I assume that it is a bug in the mac version. Either that or the fact that you can not copy and past folders into a switch pgo layer is a bug on all systems.

EDIT: Try to activate the empty folders in the pgo switch file before you drag/copy your own mouth shapes. You activate the layers by ticking the white empty box in front of their name in the layers panel. (see attachment) When inactive I could only drag. When active I could also copy and paste.
Greetz! 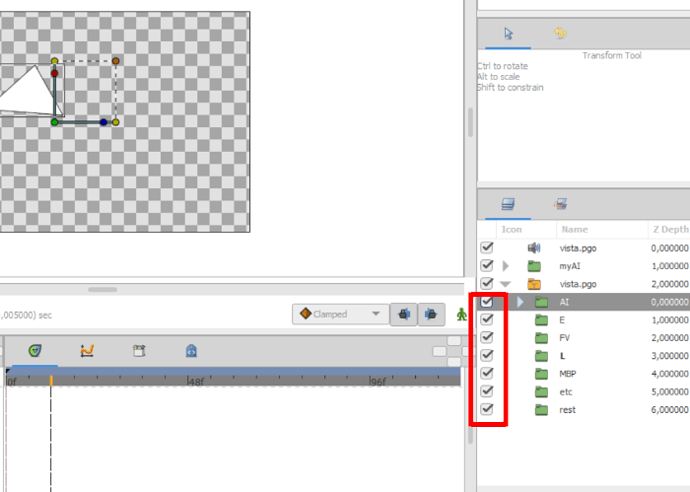 Any suggestions? For instance is it possible for me to make my own groups with the .pgo group names and use these in place of the ones it automatically makes, or do they have special attributes that would be lost if I did this? 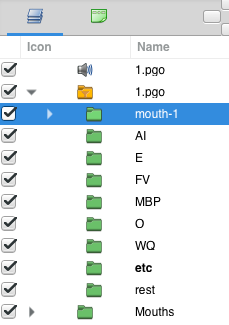 Hi!
I think that changing the names of your mouth shapes to the preset ones could be a workaround. For instance myAI would become AI, etc… then you will have to delete the original empty folders and check that the aproriate mouth shapes are shown when the animation is played. If the pgo switch layer is preprogrammed to show only the given folders with the names AI, E, MBP, etc then it should work, since your folders will use the same names, unless of course there is some hard coded link between the original folders that you deleted. Might be a good idea towards the developers to fill the preset folders in the pgo switch file with standard mouth shapes instead of leaving them empty. It would be easier and probably possible to also use copy and paste.
Greetz!

Using my own folders did work which is fantastic as I now have a workaround. I wish the developers would fix the click and drag issue though as it makes moving everything around so slow and tedious.

Thanks for all your help!

Hi!
You can post the issue with dragging folders into a pgo switch folder on mac here:https://github.com/synfig/synfig/issues
Greetz!

I have the same problem with Windows 8.1. I don’t think it’s just a mac issue. I have no way to work around it either.

I’m glad a year later and it still isnt fixed…

Has anyone found a solution that works? Copy and paste does not and neither does making my own folders.