Other goals:
* Promotion of Open Source software and its ideology.
* Improving existing Open Source products by giving appropriated feedback to developers and community.

We need creative people to help our project:

The next milestone in project development is creation of its demo. The demo is 3 min scene from a movie where two main characters meeting each other for the first time.

The demo planned as a music video and could be watched as standalone piece. I want to use Per Gessle’s composition “Hey Mr DJ” which is NOT free music. And I HAVE NO rights to use it for now. My plan is to produce the animation footage first and then try to get permission to use this song.

Feel free to post corrections for message above. I’m not strong in English enough.

Translation of storyboard will be finished this weekend (I hope so).

To make all materials in 3d models consistent across the movie we need to tune them against different types of lightning.

All 3d models will be rendered against one of this presets.

I did a couple of doodles last night before I saw this - I’ll upload them as soon as I get home. They’re not particularly relevant as I had no idea about the plot, but as potential character designs, you can tell me what’s good, what needs changing, etc. 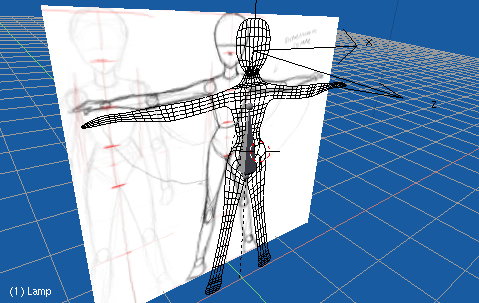 We need to keep all models in the same scale. So we need some size template. I chosed for this a figure of one of the main characters - Morevna. She is about 1,7 m height (with her boots).

You can see from attached .blend file what we took 1 m = 2 blender units.

For now Morevna’s figure is just a plain contour. But I think it makes sense to develop it to a simple 3d doll with, so we can draw some complex poses from her.

As you can see, I modeled it against the Morevna’s body layout draft: 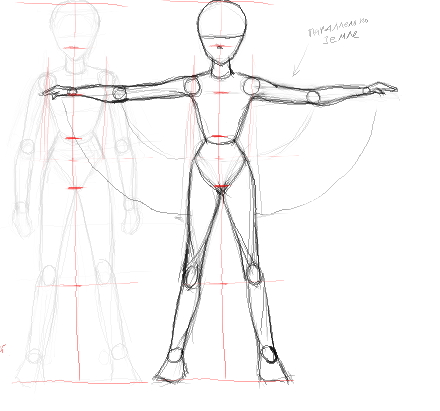 …so steps to finish this task are:

Task assigned to: nobody.

I did a couple of doodles last night before I saw this - I’ll upload them as soon as I get home. They’re not particularly relevant as I had no idea about the plot, but as potential character designs, you can tell me what’s good, what needs changing, etc.

And also try to write a story plot. I understand it is essential to know such things while working at any part of the project.

Now I alsoo see what translation of screenplay could become a top priority task soon.

We need to have an idea about place where the first part of the demo happen. 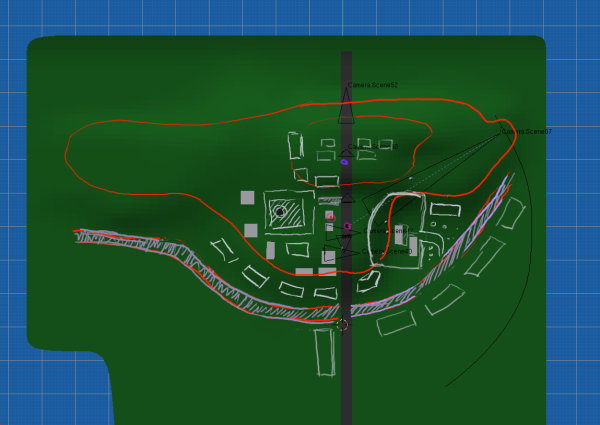 The place where Ivan and Morevna fighting with soldiers is a ghost town across the road. It seems what some combat apperations took place here recently. Some buildings are damaged, all civillians left, but the town not become heavily ruined yet - some buildings looks like completely undamaged.

I placed some cameras and numbered them correspondingly to particular shots in storyboard. I hope this will help to understand where main actions of the demo happen.

This scene also will be used to make general 3D panorama (shot number 7). But we need to do a lot of work on this scene before that. 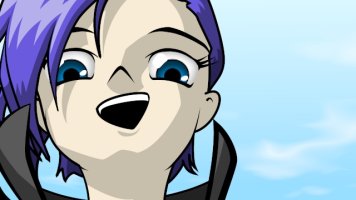 This video - a kind of “proof of concept” for me. Is synfig really capable to produce anime? I think it is.

This video is licensed under: Creative Commons Attribution-Share Alike 3.0 License. 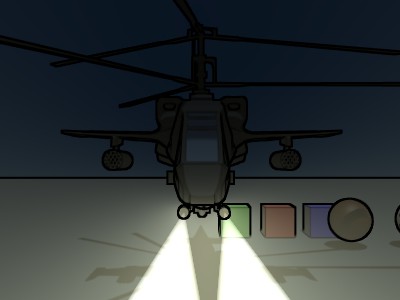 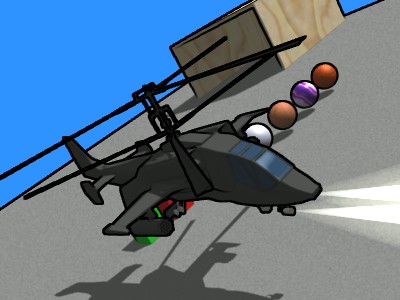 I need a design of soldier’s uniform. There are a group of soldiers who acting against main characters during the demo. I think before designing soldiers themselves we must develop their military uniform.

Some info about soldiers:
They are the soldiers of the state, but must resemble bandits in some way. They are not have any fire weapon (it supposed to be completely destroyed in battle preceding demo), that’s why they are armed with bottles, bats, sticks, chains and other crap.

That helicopter is pretty snazzy - better than anything I’ve ever got blender to do.

Here’s those doodles - possibly the dude could be the prototype for the leader of the bad guys? Dunno where if at all the other two would fit.

Slightly confused about these bad guys: soldiers and bandits are very different things, and I don’t know what ‘look’ you’re going for. I’ll wait until the plot’s released in English. 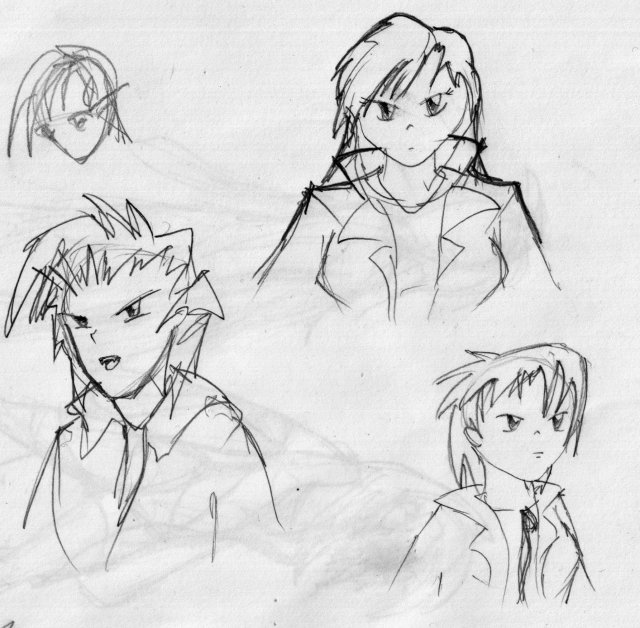 The scenario is based on the Russian fairy tale “Marya Morevna”.
I think it makes sense to become familiar with it while I making translation of the plot. You can read it here.

Here’s those doodles - possibly the dude could be the prototype for the leader of the bad guys? Dunno where if at all the other two would fit.

Very nice. I liked the girl on the left - the way how she looks, her sight resembles Morevna very much. But Morevna have a different haircut. The main part of her hairs laying close to the head. But on the right side she had a long lock. I mark direction in which hairs falling with red arrows. Then painted over.

And also I missing eyebrows in your artwork, so I added them. Remember, that as her right eye is closer to us, he must look a bit bigger than left. According to perspective. I suppose you tried to copy the nose from my animation, but (oh!) nose was not a strong point there. ^_^’’

I also liked the dude on the left. He is too cool for the gang leader, but I think he could be a third Ivan’s brother-in-law - The rocker.

Generally I liked the propotions and the main tune of characters.

Slightly confused about these bad guys: soldiers and bandits are very different things, and I don’t know what ‘look’ you’re going for. I’ll wait until the plot’s released in English.

Gender: female
Age:20
Height: 1,59 m
Hairs: violet
Eyes: blue
Formula: Do what you will, go where you want & take care of everything

She is the biker-girl, riding the roads of the country armed with her katana. Not a bird of passage - she owns a luxury mansion - but can’t live without road and wind. She not falls in anger over trifles, but if she did, becomes a very dangerous enemy, especially considering the fact she handles katana in an expert manner. In the past she was a biker-gang leader, but all her gang members were killed. A tempered person, she could look very confident, but she just a very lonely in fact, and that loneliness could hurt her more than anything else. Hotblooded by nature she not used to trust people and often forced to hide her true feelings behind the mask of coldness and senseless. She gained a great power and should know how cold it feels being on top without anyone else on the same high. Loneliness is her worst enemy and feeling of guilt as shadow follows her.

There are quite a few people who earned her credence: Ivan, Nazar the Brave, Baba Yaga, and a her gang members.

He definitely could be identified as a smart guy. Not genius, but defenitely smart and that’s suits him.

His parents died and he managed to raise his three sisters undertaking the role of elder brother (while not being the elder at all). Not too confident and not always aware about his own actions, but he is not looser at all. When it comes to his devotions or justice he rarely will stand apart. His main passion - a car tuning. Also have a knowledge in electronics and cybernetics. Generally he’s just exposed to curiosity to know how the things works. Not paying much attention to his own reputation and never holding his emotions.

About enemies. Don’t you think that soldiers may be close to bandits more than anyone else? Both strong. Both armed. And dangerous.

Some thoughts about design. Here’s a rough doodle. 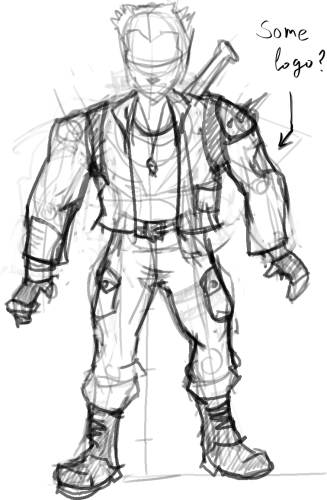 But I think we need to make uniform more unique and maybe a bit futuristic.

Not overly futuristic - except that the glasses could have heads-up-displays on the inside. In my head the jacket looked a lot less trenchcoat-y and more like the typical one you drew but stretched down a bit.

Another note: I used green because it seemed the done thing, but there’s no reason to - we could use greys, blues, dusky browns, etc. Do you have a favourite colour?

EDIT: one pic was too saturated. I’ve replaced it. 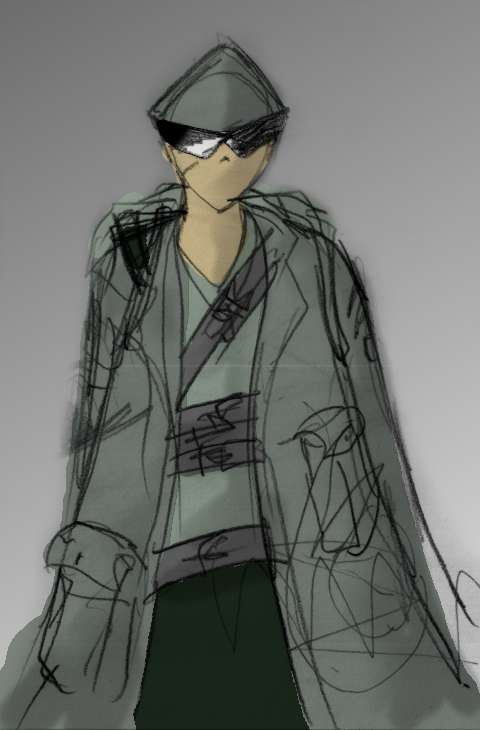 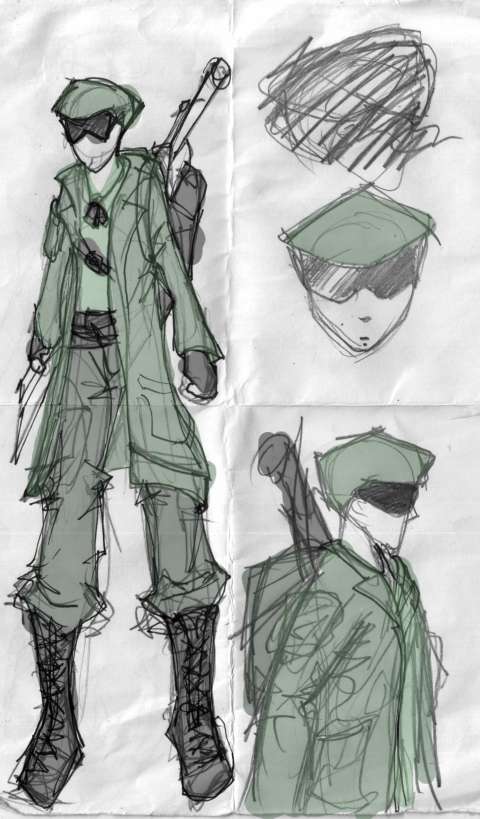 Not overly futuristic - except that the glasses could have heads-up-displays on the inside. In my head the jacket looked a lot less trenchcoat-y and more like the typical one you drew but stretched down a bit.

Another note: I used green because it seemed the done thing, but there’s no reason to - we could use greys, blues, dusky browns, etc. Do you have a favourite colour?

Sorry, I think you get a wrong track. For me he looks more like a hunter, than a bandit.
I want to stop at the short jacket. For example I like jackets like this: 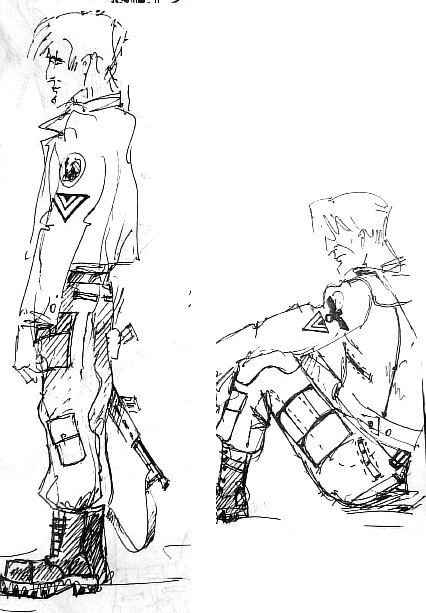 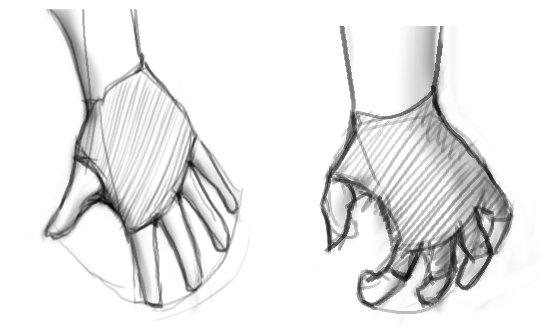 I got some ideas how to achieve desired result.

1. Futuristic view.
We need to design a cloth with futuristic look, but minimum amount of electronics (only exception - they could have metal “C”-rings on their heads with intercommunication facilities). Also uniform must be lightweight.

I suggesting to add a small shields like some sportswear have:

You also could see such on various military uniform prototypes:

(In the image above I don’t like the covered head - we need keep their heads open; and shield in the front - it makes figure too heavy.)

We could place shields right over the jacket.

2. They must look like a bandits
OK, we could design the base, common uniform for all soldiers. Then, we could variate it, add some details for individual soldier.
For example:

I don’t care about colors - for me just shape is important for now.

Done rather hastily, I’m afraid; Is this closer to what you had imagined? 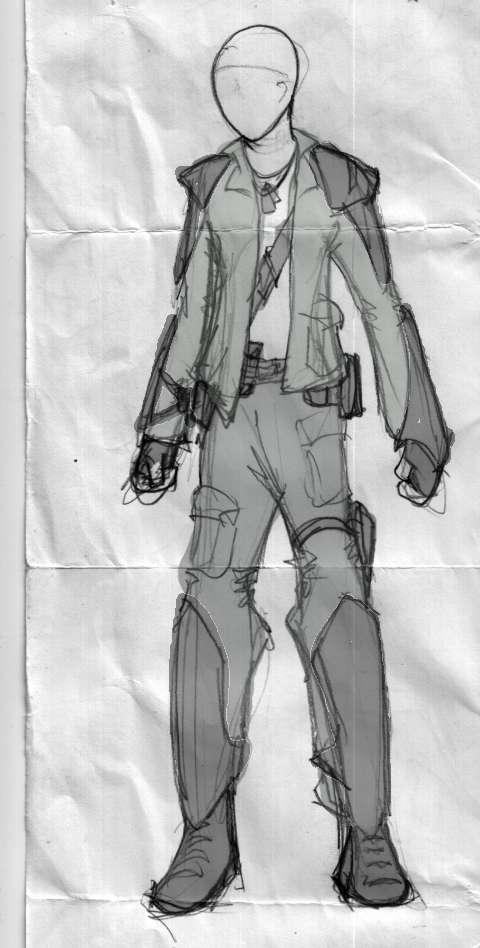