I like to make simple cut out animations with Synfig and I usually use a bunch of simple poses for eyes, hands, mouths and sometimes even poses for legs or arms. Working with exported canvases however always gets messy and is kind of buggy in the windows version of Synfig so I went looking for a more graphical way to insert poses and I came up with this litte tryout. 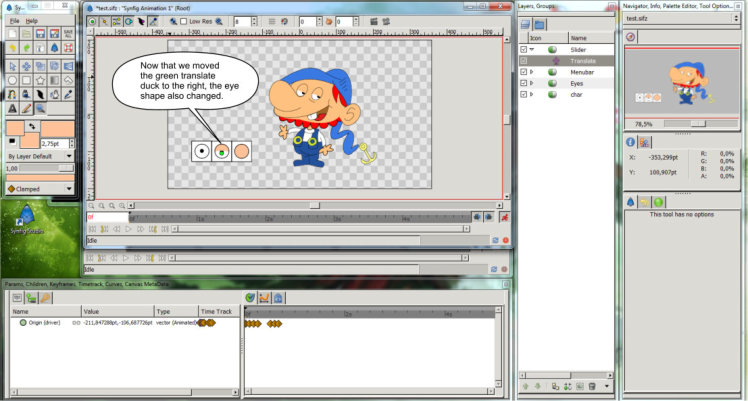 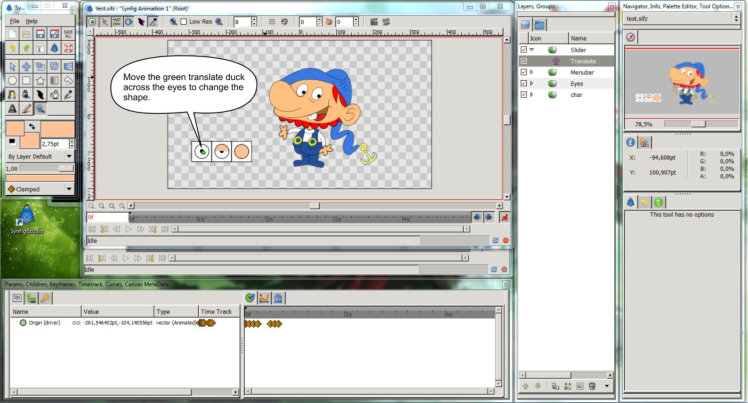 Another update of my simple cut out animation template. I added more eye shapes with seperate left eye and right eye selection and the beginning of the mouth shape menu. Next in line are eyebrows and hand shapes.
template01.sifz (71.7 KB) 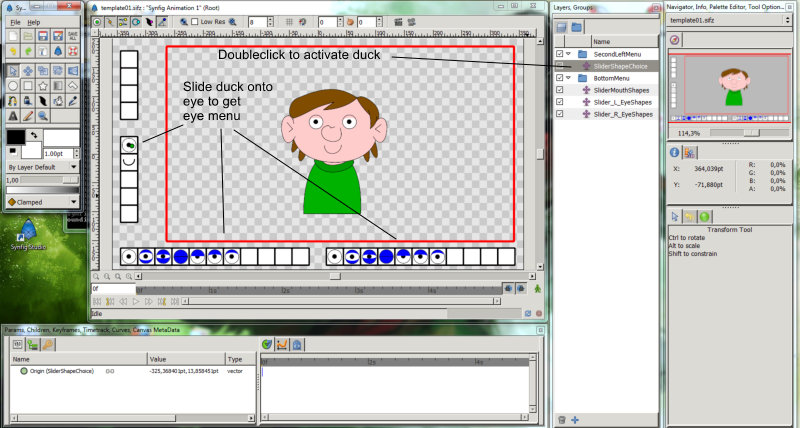 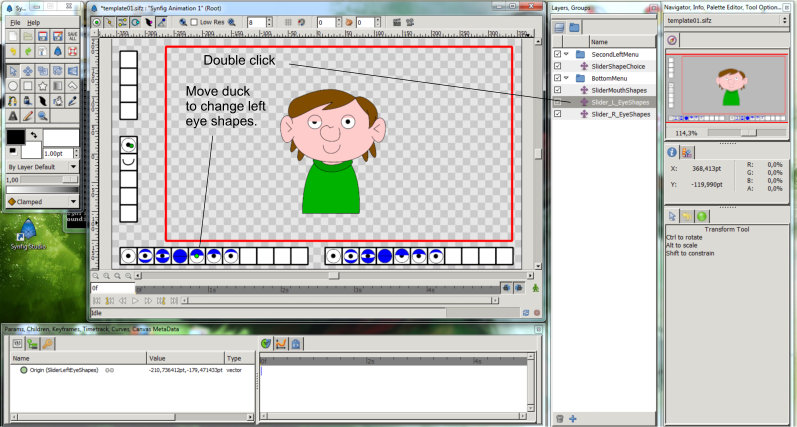 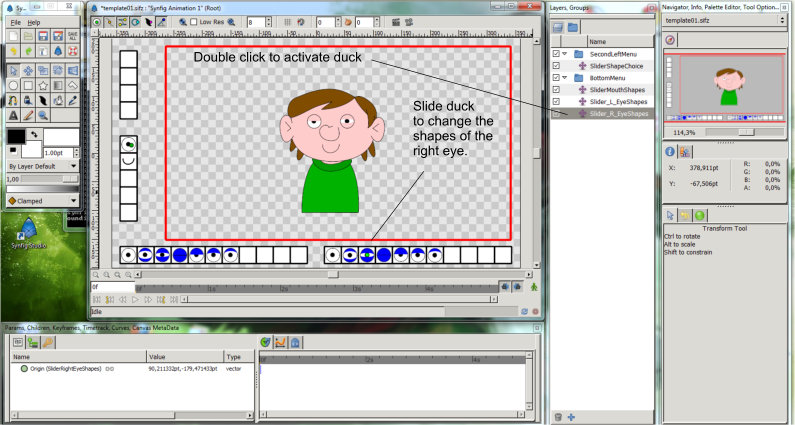 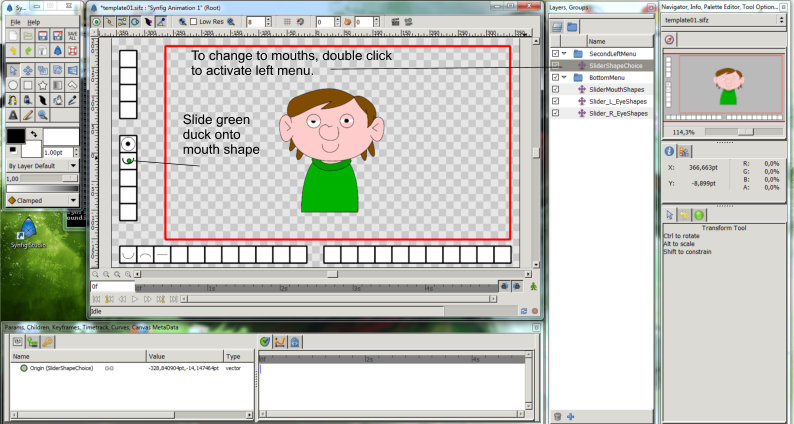 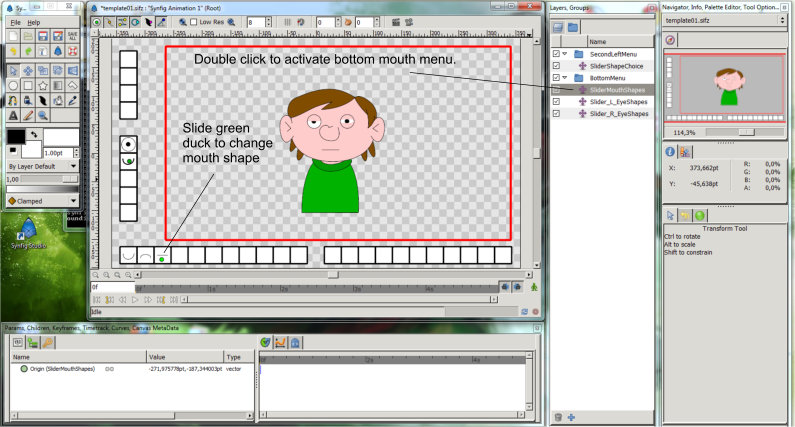 Small update with the addition of 8 mouthshapes. 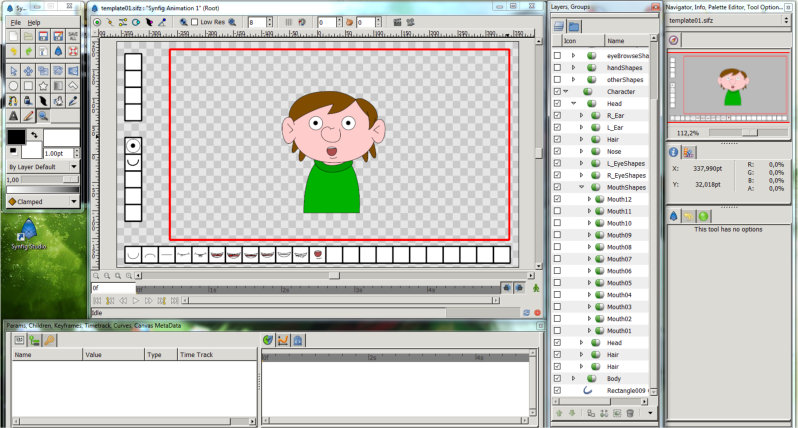 Added 3 pair of hand poses to further test the framework of the template. 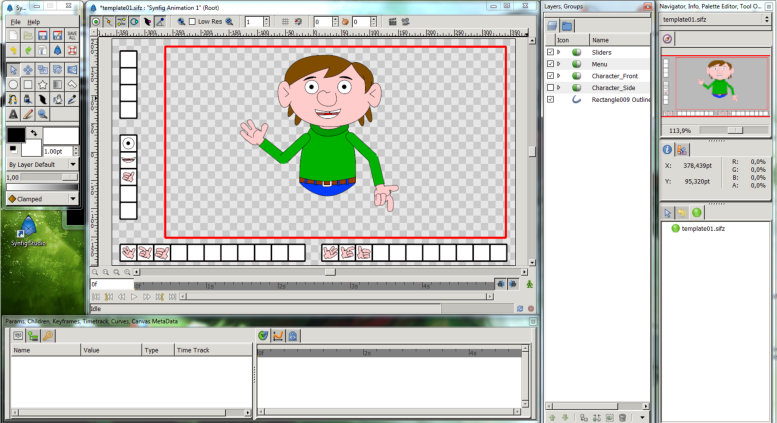 Added the ability to switch from frontal pose to side pose using the left slider menu. 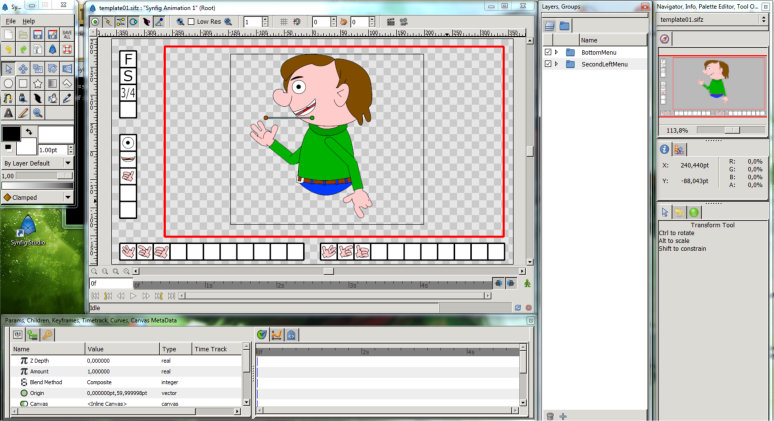 You are using synfig in a interesting way : creating your own tools.
Did you saw this video from zelgadis about character animation ?

I saw the video of Zelgadis and it’s great. Really hope it will all be inserted in the Synfig windows version also. I just want to create a framework within Synfig in which I can distribute characters that are easily manipulated for either simple animation or for illustrations for powerpoint presentations and such.

Hey, very interesting technique for switch layers! I definitely have to try this.
Is it hard (time consuming) to setup?

It’s not difficult to set up and at the moment I am spending more time on creating the shapes within the switch layer(s) then on the actual menu. I made it diffucult for myself by wanting to incorperate the three character poses (frontal, side and 3/4). I based everything on the ipo driver post I found here on the forum, but instead of rotation layers I used translate. I am planning to make a small tutorial with just a few eye shapes.

Short tutorial on my version of “switch” layers. 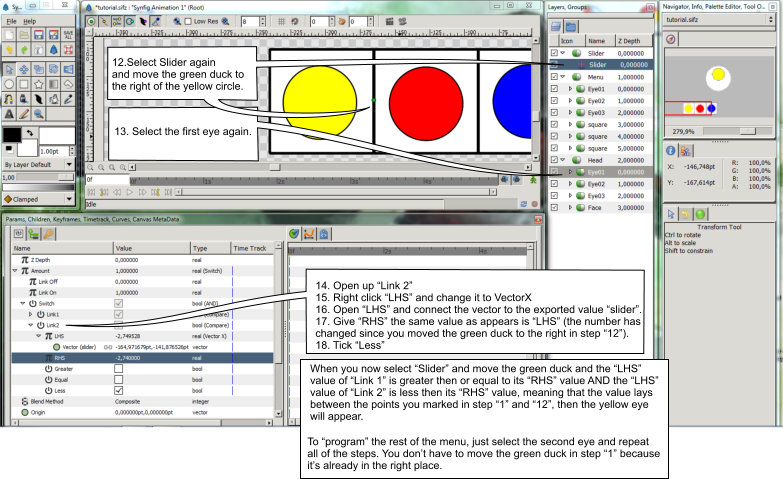 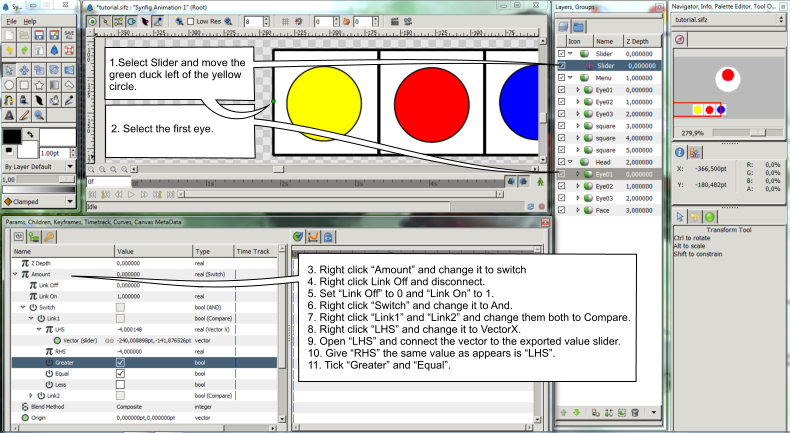 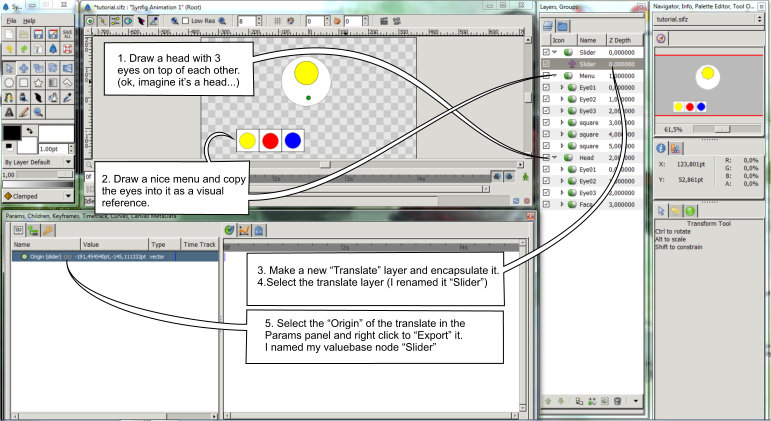 You are using synfig in a interesting way : creating your own tools.

I’ve thought about doing this a lot. Do you know “little big planet?” Building things in that game inspired me to make that “control box” I had. I had other things made as well. If you think about it, all we know in computers are just steps up from 1s and 0s.

We could potentially program anything using the “language” of synfig and its GUI.

Very nice implementation of the switch gizmo using convert types.
To avoid to need to click on Sets (old Group) panel or to manually select the translate layer you could create a shape (a Star layer for example) over the Translate layer and link their position vertexes. This way you can choose the slider gizmo just by clicking on the canvas.
-G

To avoid to need to click on Sets (old Group) panel or to manually select the translate layer you could create a shape (a Star layer for example) over the Translate layer and link their position vertexes. This way you can choose the slider gizmo just by clicking on the canvas.
-G

Thx for the tip. It works.

4: save file , close archive manager (or redo archive depend of archive manager)
5 : rename it as .sifz and open it.
6 : connect by hand what we disconnect in text file : select in children panel “TimeLineCursor”
7 : for each link1 and link2 , of each eye position (eyesOpen, eyesClose…) convert link as “vectorx” connect it
End Edit

Hey guys!
stop doing your own GUI!!! Let it to the developers!

stop doing your own GUI!!!

Sorry, but it’s Synfig fault… he is so powerfull that now he is generating (in the mind of the users) his own UI and Tools !
…

<Edit 03/30> Another idea for use of this “Layer linking feature” is a script (internationalized) who analyse text sub title file (.srt) and generate Spline path on “Character template / Lipsync tool - widget” without papagayo<End Edit 03/30>

This reminds me a lot of the various rigging creations made by various artists in Blender to manipulate a model.
I’ve always liked sliders and toggles for controlling feature in Blender. This has a lot of potential, especially for cutouts. 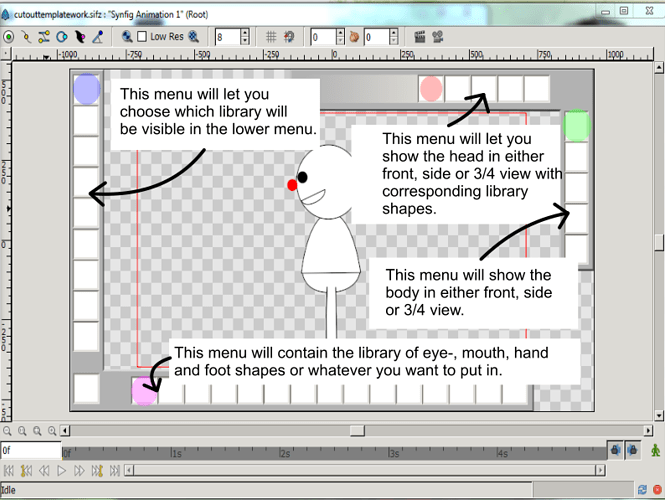