do you like this mirror change for layer panel? I merged Icon and Name columns 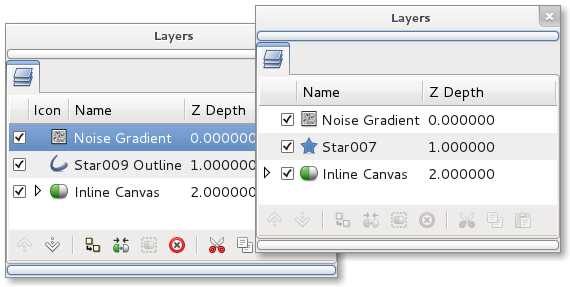 Yes, it looks much cleaner!
Jcome caught by the Synfig’s coding passion! \o/

Can you show an example with children parameters?
-G

see the new screenshot, the ON/OFF (checkbox) return to the left side as well.

it is a copy&paste job in fact, the tiny patch is committed to sf too. I wish, next time, I can come back with a bigger patch

It seems that this patch introduces a bug with the handling of the layers in the layers panel. I will revert the changes and release a minor version as 0.63.01. It will include some bug fixes that have been introduces (like this one) and some other that can be fixed.

Meanwhile, if you find a way to restore the functionalities of the layers at the layers panel, please send the patch.
-G

It seems that this patch introduces a bug with the handling of the layers in the layers panel.
-G

It seems that this patch introduces a bug with the handling of the layers in the layers panel.
-G

I don’t think this issue is caused by this patch, the patch just exposed it.

Do we prefer double clicking for layer renaming as gimp does? Otherwise we have to specified a particular space for layer re-arrangement that is why we have icon column separated.

If we still want to keep layer renaming by single clicking like current one, we can still “cleanup the layer dock ui” by making something like this:

On a layer in layer stack editor (layer panel)

btw, in 0.63.00, a layer which is not selected before, we can just drop and drag to re-arrange it without any problem.

I don’t think this issue is caused by this patch, the patch just exposed it.

Seems that you’re right. I’ve played with both states (before and after the patch) and it seems that merge the icon column just reduce the areas where the renaming operation is not triggered, making more difficult to drag a layer. But in fact the behaviour at the layer name area is the same.

Please try the proposed procedure to rename only when click and release button has been performed. Let’s see how does it work.
Thanks!
-G

Renaming layer with double-click looks fine for me.

I think it’s better to rename by double click. Sometimes I’m going nuts trying to move layers etc. and Synfig constantly wants me to rename the layers instead.

I vote for double click too.
Regarding to the modifications on related to this included in 0.63.00, I’ve rolled back them to the previous state. I would like to release a new 0.63.01 version after the summer, so if it is fixed I’ll be glad to include it.
-G