Last week we decided to take a step from JACK implementation and try to dig into harder task of implementing Synfig’s internal Sound Layer.

The reasons for that were following:
With JACK everything got pretty much clear already and even if Ivan will leave the project in next month, then this work could be completed by me or other community members.
In contrary, the problem of internal Sound Layer estimated as requiring a descent investigation. And if we would postpone it for one more week, then there was a risk to end this month without anything ready to demonstrate. This, obviously, wouldn’t play well for us, especially considering that Sound Layer will be much more demanded by regular users (I guess).

So, we decided to put Ivan’s efforts into Sound Layer.

For the Sound Layer we decided to try the Gstreamer engine as a backend (which is not a surprise).

At the moment Ivan have coded main Gstreamer infrastructure and added a basic Sound Layer with minimal set of parameters. 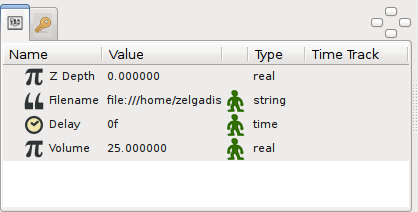 So, no demonstration this time, please be patient till the next week.

A little note for those who will be brave enough to try compiling this branch. The code is based on GStreamer 1.x API and we also used a Gstreamermm as C++ bindings. Unfortunately there are no official Gstreamermm for 1.x API exists - only 0.10 officially supported. So you won’t find such dependency in your favorite Linux distro. But there is an unofficial version can be found at GitHub, which we rely on. Looks like it isn’t mature yet, but I believe this is better than fallback to old GStreamer 0.10.x API.

Well, that’s all for today!

Let me remind that we are still running a fundraising campaign and it’s still only 16% raised. So I strongly encourage to join our “Two-Dollar Sprint” and help us get funding for the summer!