A simple one this month, so no excuses for not participating!!

A simple animation, with motion blur. (I suppose you could even take a single frame, as long as it implies speed).

Okay, here’s a first go. I’m a big fan of Adam Phillips and have the first four chapters of his Bitey Castle Academy (BCA) series. The BCA series is written for Flash but I adapted a lesson in the latest chapter for Synfig to produce this first go at a wasp-like creature in flight. It could definitely use some tweaking, but at least it has motion blur.

Aaaah! you beat me! I wanted to do something in the same line!
Good entry!
-G

… to produce this first go at a wasp-like creature in flight. …

PS: I don’t want to be pedantic (I known I usually am

), but don’t they have two pair of wings?

… to produce this first go at a wasp-like creature in flight. …

PS: I don’t want to be pedantic (I known I usually am

), but don’t they have two pair of wings?

Yeah, that bit of laziness was the main - but not the only - reason I called it a wasp-like creature.

In before the end of the month this time - youtube.com/watch?v=JbYt3PLn56Y
No prizes for artistic merit, but hey, it’s motion blur!

I like your entry Genete, it’s beautifull…
I’d prefer if the kinda blue shading followed better the bird movement, but it’s already nice!! 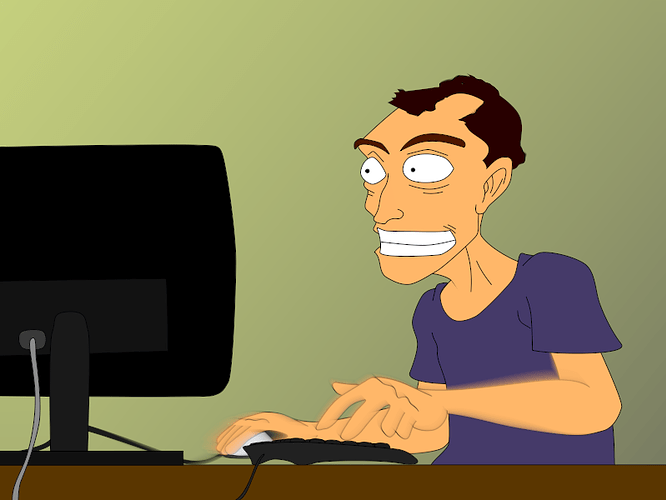 pixelgeek: the movement of the magic wand is very good!
Animtim:

is it you in front of the computer when use synfig?

Nicely done Animtim! You really get the feeling of an intense computer user…

pixelgeek, could you share a source of your entry?

Let me know if you can figure out why the motion is a little jerky as the wand first lifts off the table. I had to keep putting in waypoints to stop it from swerving off…

Thanks, Pixelgeek. Probably MotionBlur layer lacks some parameters - it’s not easy to get effect like yours for some types of motion.

Imagine we have this situation:

Notice, the frames at 18f and 2s have the same values, but the curve between them not constant. To fix that use linear interpolation type inside of interval:

You did it better! (and I can’t claim credit - Voria did it first in Synfig)