[size=150]Why[/size]
Render and preview icons on the right top of the canvas window are not clear enough for a user to understand and distinguish, there are so many (seven) CIRCLE looking icons staying in canvas window 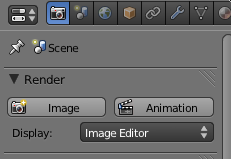 [size=150]Proposals[/size]
Here is my proposals of Render and Preview. They are just concepts not the finished works.

and the screenshot for your reference

Not bad ideas. 99% of clapper boards I’ve seen open from right to left. I would also modify in some way the colors. They doesn’t match with the rest. Maybe they are too saturated for my taste.
-G

Genete, thanks for your input.

The bellow Images are linked directly to my icon git repository, once I commit new version, they will updated as well.

Can I see them in real size?
-G

Though of course not precise

Can I see them in real size?
-G

Still work in progress. Once the artworks satisfy me, I will post a screenshot to show how it looks in real app.

updated, I don’t like this version still. more work needed,

Git is an awesome tool for icon designing job

We can trace all the improvements according to the commits, for example, the new Render Options icon:

Some detail improvements needed still, and should switch to use tango color palette in the final artwork.

5 - trail 5
In my local repo, not commit to the github repo yet.

You can trace the full history here in my synfig_ui/icon repository hosting on github.com.

Looks good to me. I would like to read someone else opinion too.
-G

Yes, they both look great. They do everything free desktop icons should - they have distinctive outlines, would work in two colours for visually impaired people, they describe their function in a non-cultural specific way

Personally I’d prefer it if the clapper-board had white and black chevrons instead of orange and black but that is very minor!

I’ve been following their development and seen that you put a lot of work into them - well done jcome!

Personally I’d prefer it if the clapper-board had white and black chevrons instead of orange and black but that is very minor!

Make a new one according to your input:

I like this B&W version more than orange one.

I like your design very much. Especially when the clapper board got grey.

Do they come through clear as what they stand for? Preview and render? Is there a clear line between a projector and preview, clapper board and render?
i know these thoughts should have come a few weeks ago, sorry…
I can’t think of any better analogies than these though.

Before I started these redesign, I researched other animation softwares. Most of (3D) animation applications use clapper board as render symbol including maya, 3dmax, k-3d, blender. But I can’t find a common symbol/icon for Preview function

so I took projector as new Preview symbol.

Maybe we can tweak the clapper a bit to have an alter version of it as Preview icon.

Although, as rylleman says, the clapper-board is an imperfect metaphor, jcome is right that it is widely used for render and so would be familiar to many users. The preview icon is very good too - it looks like a simplified Moviola.