How do I make an object (layer) disappear, and then reappear at a later point on the timeline?

I need to make an object appear at a a point on the timeline, move to the other side of the map (background), then disappear at the second point on the timeline, and reappear at its original point where it first appeared on the timeline. I have set my waypoints for the object for it to appear and move to the second point, but I don’t know how to make it disappear, or be transparent, while I move it back to its original location on the timeline. I guess I’m trying to make a loop. But when I try to hide the object under the background while I move the object back to point 1, it doesn’t work. When I try turning off (disconnecting) the layer at the point it should disappear, the object doesn’t appear at all, at any waypoint. I have tried moving the layer off the map out of view at a the point it should disappear, but again, it disappears at all points on the timeline. I’ve been stuck for days on this problem. I read one help file that said to “set the amount” to 0, but I don’t know what “amount” is. Where do I set the amount at, and what does that mean?
Thanks for any tips you can give me.

In order to make it transparent, you need to change layer amount as you read in docs.
In this context, “amount” means “alpha channel” or “opacity”.

You can set its value in Parameters panel. In the default workspace layout, it stays in the left-bottom corner.
It can be seen in the picture below.

That said, there’s some discussion about renaming Amount to “alpha” or “opacity”. It’s happening here: https://github.com/synfig/synfig/issues/411 . 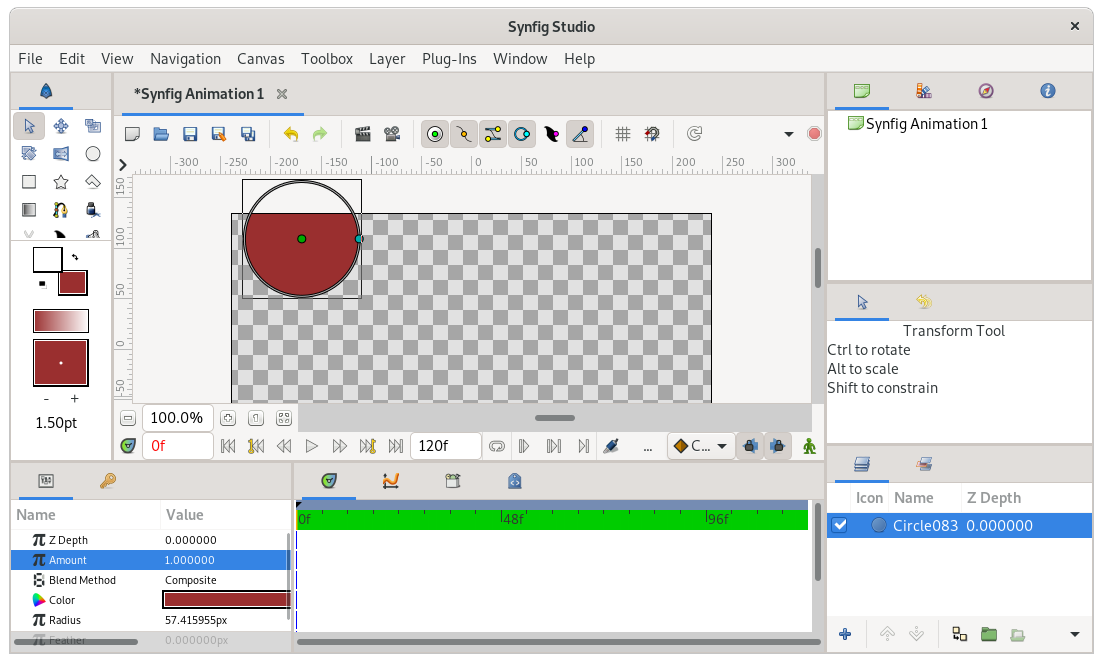 A little search with the dedicated function helps

Good afternoon, I have a terrible problem. I don’t find how hide and reveal images during an animation. I add an image and it remains on my work space in each frame, Does it is possible hide images in frame where I don’t need it?

I did try the help files first, but apparently I didn’t use the correct search terms. But this helps, so thanks.

Thanks for your help. That’s exactly what I needed to know.