Help with a new icon

Hi!
I’ve been working on the mentioned feature of “relative animation”.

Unfortunately I’m not good at icon design so I ended with this one:

Anyone that want to help me on improve the icon? (or change by a new one)
Thanks!
-G

stick man as the above green man but in red?

standing means no new waypoints will be generated, and red means the modifications will be recorded/recognized by synfig animation system .

and, btw, can it be merged into the current animate on/off button? So that button will have three status, animate on,off and relative animate mode(offset waypoints) on

or just simply turn on the" offset waypoints" feature in animate off mode?

regarding new icon, I have another idea may satisfied you:

duplicate the green figure, then place it next to the original one, maybe there will be more tweaks involved when presenting the idea: the poses(waypoints) will be kept but the character will be shifted (offset) accordingly in time line.

Hello, Genete, I finally have time to sketch out my ideas. Please be informed that they are just concepts not the final designs. 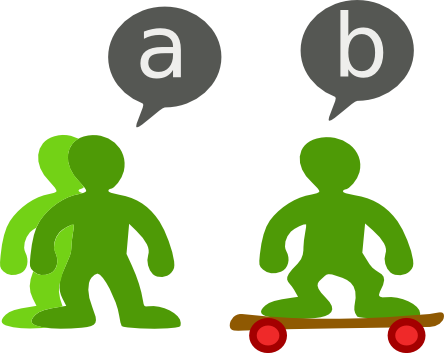 my favorite is proposal b

a fun of weekend 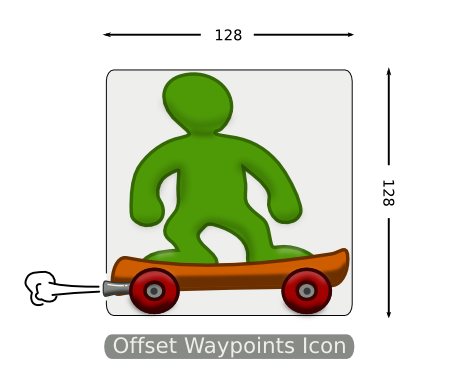 Still not apply the tango style completely, I plan to do it in Synfig Studio, but hope if you like it. And later on when I am free, I set down in front of my computer( I can’t spend too much time on computer recently) to redraw it in Synfig Studio (master version). Personally I prefer Relative Animate Mode instead of Offset Waypoints

Nice ones! But I prefer proposal A. I think it better represent what is happening. Skateboarding is cool but looking at that icon I have no clue what so ever what happens pressing the button.

The initial idea is the player standing on the board, has still pose, but he can be moved because he is standing on board( offset waypoints on) . You have point here, skateboarding character is a bit complicated and not well representing the meaning, since the player would change his pose in real world. Proposal a is more intuitive.
one of the reasons I prefer it to proposal a is :

but don’t make me wrong, I am open for this. Let me see if there is other ideas can be generated. And maybe Genete and others have inputs here.

Hi Yu!
Thank you very much for your icon proposals. The fact is that it is possible that the icon is not really needed at all because Konstantin is proposing that when in animate mode off, it implicitly implies offset waypoints on and viceversa.

Yes, it would be nice, if it is possible to just merge it to animate off mode as I asked

or just simply turn on the" offset waypoints" feature in animate off mode?

It would make user happy and feeling easy (the less is more, in some cases) when they are playing with Synfig Studio, If there is really needed for third mode, we can enable in preference dialog/panel, since it is not a daily used for a user.

But anyway, it was enjoying to design this icons,

The icon itself can be used as poster of this new functionality.

The icon itself can be used as poster of this new functionality.

LOL, a T-shirt of the skate stickman!
-G

…The fact is that it is possible that the icon is not really needed at all because Konstantin is proposing that when in animate mode off, it implicitly implies offset waypoints on and viceversa.
…
Opinions?
…

A single switch sounds good to me. Keep the UI as uncluttered as possible. Agree with jcome that a third option perhaps could be added as a switch in preferences dialog.

its how a lot of 3d applications do it. you switch to animate mode and make some animation, if you then turn off animate mode and translate the object in effect you are adding an offset to all the keys.

Of course theres always the chance that user could accidentally move object with animate mode off. but the same thing happens in 3d applications and as long as you can restore the position/rotation to the original value then is can be restored.