Having some problem in building 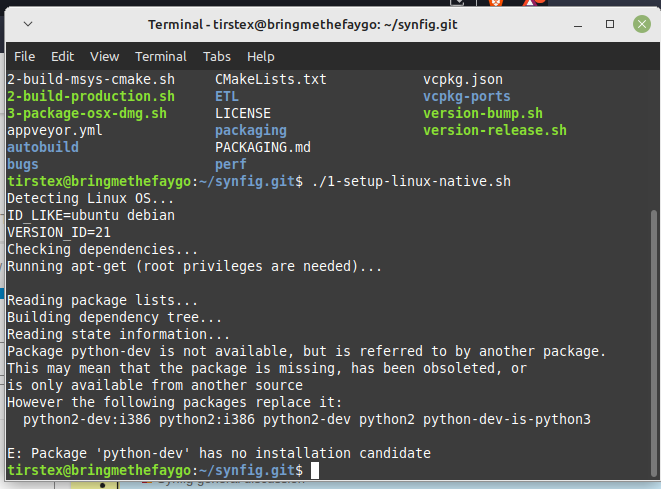 Please help me with this

You have the answer in front of your eyes

should do the job.

Otherwise edit 1-setup-linux-native.sh and replace the occurences of python-devel by python-dev-is-python3.

Why do we need python-dev anyway?
We don’t use it yet, do we?

not solve yet showing the same thing

Did you run with sudo?

yes i did run with sudo

Ok, obviously you are under Linux Mint 21 Vanessa (the VERSION_ID was too much high for a Debian :P)
Always indicate which OS/version you use

python-dev is no longer available since Debian 11, Ubuntu 20.10, and any distribution derived from those. If you need Python 2 you can try python2-dev instead, but note that Python 2 is no longer supported by the Python community, and many modules are only available for Python 3 in Debian and Ubuntu.

How to install or uninstall "python-dev-is-python3" on Linux Mint 21 "Vanessa" ?

or you can still install python2-dev but is there any interest?

In any case, even though it would be heavy, you can use a virtual machine or a Docker image for development.
See also the offical build toolchain GitHub - morevnaproject/morevna-builds