Hi!
Anyone (Genete?) know if there is a sif file of this demo?
https://www.youtube.com/watch?v=dsO6FlhX9mA
Greetz!

did you check the wiki : wiki.synfig.org/wiki/Convert#Dynamic ?

Hi!
I don’t have the file but it wouldn’t open currently because it was one example during development and parameters have changed.
Anyway it is pretty simple to setup. I’m sure you can do it by following the wiki link from djay.
Greetings
-G

I’m sure you can do it by following the wiki link from djay.-G

Hi!
Planning to make a wiki dynamics tutorial using your file. But I will try to mimic it and cook up something in my cauldron. Thx.

Okay, I’ve read the wiki link, and I’m still scratching my head over this one. I tried drawing two circles, and then linking their origins, and converting one or both to dynamic, and all they do is overlap each other, and changing sub-values simply moves them both about the screen in the same spot. I can’t seem to wrap my brain around this one. What are the basic steps to set this up? I know I’m doing something wrong, but I have no idea what. 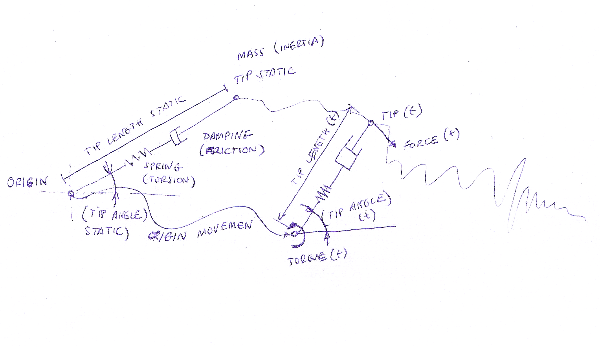 My free time is very limited lately. Thanks
-G

When you convert a vector value to Dynamic what you get after the conversion is the Tip position along the time (TIP (t) in the figure). Initially Origin is defined to be (0,0) and not animated, so there is not movement for the tip.
To obtain tip movement you can:

So changing to ON would abruptly change the position result of tip by adding the origin value (what could be not (0,0) if you changed it)

DYNAMIC RESULT is based on fictitious forces induced by the origin movement, by the forces and torque applied and even by any variation of the rest of parameters (mass, inertia, tip static, damping, friction, spring or torsion). In general when there exists friction and or damping and there are not external forces applied DYNAMIC RESULT tends to zero, and if origin is resting, tip will rest after some time giving you (origin +) tip static as result. Otherwise the result would continue being in movement.

I hope this helps a bit more.
-G

Hi!
I will clean it up this evening.
I am all hooked on particle layers right now, but dynamics is still on my to do list.
Greetz!

What are the basic steps to set this up?

Hi!
Just like the particle template, the possibilities of the dynamic system are numerous to say at least. I made a little basic example to start you going. (That is because I can’t make a more elaborate example since I am still wrapping my head around this too, haha.) In short. Draw a line. Select the line. Go to the parameters panel and open up the vertices and open up vertex01 and change its vertex vector to dynamics. You now get lots of new stuff like force, torque, damping stuff etc. Keep everything on standard setting as it is. We will just animate the origin in this example (open the vertex that you converted and you will find the origin right under Tip static). Go to animate mode. At frame of set the origin at 0,0. At frame 12f set the origin to 0,20. At frame 18f set the origin to 0,-5 and at frame 24f set it back to 0,0 again. Press play and you will see a springlike animation. Voila.
Greetz!

edit:The origin of the circle is linked to the exported dynamics vertex vector of vertex01. (That’s a lot of vertexesorzzz in one phrase

)
edit 2: Second example is a crude downward spiral spring thingie. Standard settings not changed. Only origins animated. You can tweak this into Oblivion to get it right, but it’s just to give you an idea.
spring.sifz (3.4 KB)

Cool! That’s definitely enough to get me started! I tried a line before, but I was right clicking the vertices, instead of going into the parameters panel. So thank you Darkspace, and thank you Genete!

Hi!
Is this ok for the clean up?
Greetz! 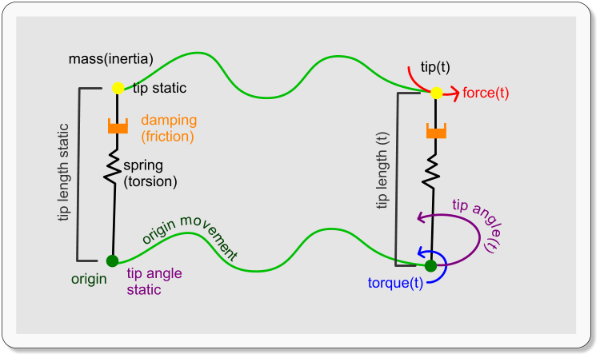 Hi!
Is this ok for the clean up?
Greetz!

Picture added to the wiki
Greetz!

Picture added to the wiki

Nice …even if this image is not really self explanatory …maybe a mooving image (like in tcb doc ?)

Nota: i have moved from where it was added

Talking wiki … in the same time i have reduced one of the image of Doc:Animation Basics‎ (dialog property) . Please try to do not make image bigger than something like 1000px wide.

The still explained a lot, at least for me it did, but yes, a moving infographic would be awesome for sure.

Talking wiki … in the same time i have reduced one of the image of Doc:Animation Basics‎ (dialog property)

Please try to do not make image bigger than something like 1000px wide.

I wish that this could use in bones

I wish that this could use in bones

Attaching bones to dynamics disrupts the automatic vertex animation of the dynamics, but you can group the objects that use dynamics and then translate them all using the group transformation widget with the resutl that you can use dynamics in a cut out environment that uses group transfromation only instead of bones to rotate joints and such.

I translate this, but do not understand it

I translate this, but do not understand it