Hello I recently downloaded the latest version of synfig. At first it was working fine, then it seems the more layers there are the more of propensity it has to crashing. At first it was if I was if I was trying to undo something. Now it seems to happen randomly when I click on anything. Just randomly. Its made my working on everything extremely hard. I try to save at this point after every small thing I do. But I still get crashes and lose things and it is so frustrating. I’m to the point where I’d almost like to work in Inkscape to get this character done, but I don’t know how or if it is possible to export my character considering a lot of the options aren’t the same between the two programs.

I am using on a windows 7 computer. Any help or insight would be greatly appreciated.

Hi!
Ctrl-S is your best friend. Esp try to save your work before you use undo. I use 1.2.0 on Windows 10. Seems to be ok so far in terms of crashing. Can you upload the sifz file you are working on? Maybe you are using certain features that are crash sensitive. Also trying to upgrade to the newest dev version could help.
Greetz!

The only major features I am using are, Groups, regions, Advanced outline with up to 6 width points, Feathering & blending modes.

Hi!
Sorry I messed up your wonderful character. I wanted to see how much crashes I got. This is what I did: I duplicated and added some hair. Made a nice hairband. Gave the head a feathered transparent shadow. Changed to color of the lips. Copied the right arm and gave her a left arm. Put some extra colors on her shirt and added a large feathered shape and finally made all the lines thicker. Enlarged the whole picture and rendered to png. Been fiddling around for more than half an hour and got no crash. You also don’t seem to use any crash sensitive stuff. The only diference is that you use Windows 7 and I use Windows 10. Maybe reinstall?
Greetz! 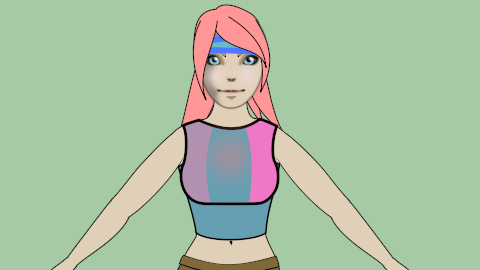 Hi!
I use the 64 bit version on windows 10. Normally I would say select single thread only in the preferences but that issue should be solved in the new version as can’t select/unselect it anymore. The message is still there but there is no tick box to select. Hope you have more luck with the dev version. You can also try the 32 bit version if all fails.
Greetz!

It’s also crashing for me unfortunately (and the worst part is that I’m on a commercial deadline). I’m using the Skeleton layer to animate my character, and with each attempt it keeps crashing. It’s impossible to work like this, man…

I’m running Synfig Studio 1.2.0 on Windows 10 64-bit and I am experiencing a fair bit of crashing (I’m currently working on some game art for a Unity game I’m making). It seems like the majority of the crashes I’m experiencing occur when I’m changing parameters of the image and when I switch between different layers / groups. I actually crashed probably 6-7 times in a 15 minute time frame, to the point where I do save after nearly every change I make.

Is there any logging, etc. that can be enabled that would help narrow down issues? I really like Synfig a lot but the crashing does make it a bit frustrating.

Sorry to crash on old thread, but I’m getting similar crashes both on Mac and Windows versions (both 64 bit). It also happens for both the 1.20 stable version and 1.34 on both platforms.

What I’m doing when this happens:

Sometimes I can go through a few iterations of 1)->2)->1) before the crash and other times it happens if I’ve just opened the project.

Are there any logs written by Synfig that I could dig into?

Same happens to me. No error message, just a “stopped working” message. There is no pattern, it just happens randomly to whatever I’m doing. Even with Ctrl + S spam I’m still loosing half of the time with restarting.

Is it possible to get an older version of synfig and if yes, can I open newer files without problems?

I see that the last post on this thread is Nov. 2017 and things haven’t changed nor been fixed. It’s April 2018, I just installed the latest version of Synfig, got ONE project done, took a break for a day and today? CRASH! And I’m doing the most simple animation: “Straight” with about 10 png images, each 800x800, black and white. No bells. No whistles. No… what-ever. I import all images. Set them to “straight” timeswap" and the very second I click on the first image to work on it (the fading transition)… Synfig decides it’s had too much to do and stops responding (as it tells me).

But, has ANYBODY figured out what’s happening with Synfig? It’s REALLY an amazing work of software and I’m just getting to understand the quirks and idiosyncrasies. But time-lines and dead-lines… seriously… at the rate things are going, I’ll just have to go back to staying awake for 24hr. days until the work is done… single images… on Gimp. (Been there. Done that. Changed my ways. Put my faith in Synfig… silly me.)

HI,
please have a try with the latest dev version and run it as administrator.
It seems Win10 is often indicated in crash reports

I have started to use Synfig about a week ago, and found it very good software on doing some animations I need. But I’m experiencing the same problem, sometimes I forget to constantly tap Ctrl-S after every change made, and at some point Synfig just silently closes making me lose all the work for the past 30-40 mins. Took some time to realize it has an autosave feature.
I see the issue is VERY old and if it’s impossible to fix it, maybe it would be a good idea to enable the autosave function by default?

PS I run Synfig on Kubuntu 18.04, so the problem may be not Windows-related.

Sorry to revive this old topic, but I really have to say that while Synfig is rather nice for animation, it simply crashes way too much to be viable. I’m getting at least one crash every minute, seemingly caused by everything from changing the time frame to right-clicking on a waypoint to even saving. Let me repeat that: using save as has a large chance to induce a crash before you can even save your file! I’m not even doing anything intensive, just using basic clamped animations on basic shapes. This seems to have been a problem in the past based on this thread, and it seems to be getting even worse as the years go by. I’m using the latest 1.4.0 release on a MacBook air running Catalina, and while Macs aren’t the most stable computers, no reasonable application should crash this much. Not to mention the numerous other bugs. While I’ve tried my best to work with Synfig and appreciate all of the nice features it offers, the crashing has reached a point where it’s impossible to get anything done. I hope the developers notice this issue and hopefully focus more on fixing stability rather than adding newer features that simply serve as just another source of crashes.

I hope the developers notice this issue and hopefully focus more on fixing stability rather than adding newer features that simply serve as just another source of crashes.

I’m not a Mac user, but I’m sorry for that crashing stuff.
I started to contribute to synfig last year implementing some (basic) stuff I (and everyone) needed and we fixed some crasher codes too.
I use it on Linux, and I’m not getting crashes so far, but @ice0 did.

Recently, @ice0 discover a cause for some random crashes, and the fix will probably be shipped on 1.4.1.

It would be useful if you could report what you exactly did before a crash happen or we can’t do anything to help on a particular case: we need to be able to reproduce the crash by following your step to investigate the problem.