I’ve been working on the first scene of my feature film, but I have no idea how to make convincing special effects.

For some effects I could simply use Jahshaka, like exposure or sort settings, but I’m really horrible when it comes to drawing effects like water or fire. Wind can be used with white vectors blurred and noise layer. But it’s the rest that I’m worried about.

For instance, there’s this scene where a boy meditates, and fire just erupts from a lit candle and surrounds the boy in a fiery ring. The trick here is to make the fire “convincing”, perhaps illuminating it with some light exposure or something, instead of old school fire.

Similarly, when a magician grows in power there’s a scene where his aura is visible. Or even a Demon with a poisonous Miasma. Then some twinkling starry sparks, and some awesome explosions.

Any help in this would be greatly appreciated. Even hints would suffice, because for an OpenMovie like this I really want to try staying away from Proprietary stuff like After Effects.

Some of the effects you’re looking can be done with the particle template and a lot of patience (they tend to crash when you do weird things)
For instance for the fire around the boy:

For the Aura you can use Metaballs with animated gradient or a large wide and all angle range particle template too for the sparkles.

But I prefer that you try it by yourself 'cos then you’ll learn.

Wow, that’s a lotta blines! O_O Hmm, so I can also use a blurred circle to make the fire shine at the center. Hmm, nice! Thanks! =D At least this particle doesn’t require scripting.

But I still don’t get the Metaballs and gradient thing. I know the gradient, but what’s a metaball?

EDIT: Also, can an existing animation be imported as a looping child canvas? 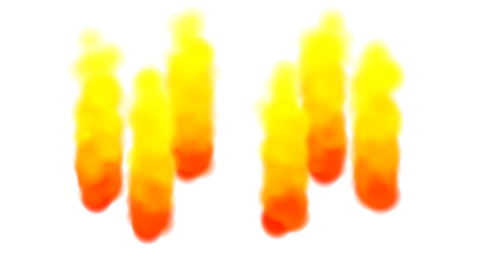 fire-simple and fire-line must be saved in the same folder. Modify the total-fires parameter in the CHILD panel to create more fires automatically.

I’ve used the Duplicate layer but you’ll find better results creating several manual copies of the fire sample and animating them accordingly. With several fire instances you can place the character in the middle and make the particular file grow one by one.
Please let me know if you need help for the last solution I’ve hinted.

WARNING: by opening the sample file you’ll warned to several crashes and possible (sure) synfigstudio hang on. The duplicate layer over a particle layer is a huge workload for the renderer. Please do the animation with a dummy fire document and at render time just change the dummy fire document by the real one.

Wow, that’s a lotta blines! O_O Hmm, so I can also use a blurred circle to make the fire shine at the center. Hmm, nice! Thanks! =D At least this particle doesn’t require scripting.

But I still don’t get the Metaballs and gradient thing. I know the gradient, but what’s a metaball?

I don’t know if Metaballs layer is enabled in the windows version. In the linux version it is enabled and it is under New Layer>Example>Metaball

Metaballs create a gradient weighted field based on its parameters. You can create nice auras with it I think 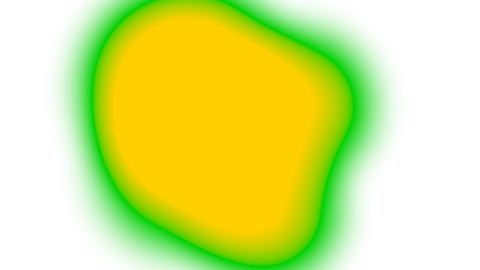 EDIT: Also, can an existing animation be imported as a looping child canvas?

Of course!!
Import the document with the File>Import (like I did with the particle template) and modify the OffSet Time to make it loop. If you don’t find how to do the Off Set Time parameter trick let me know.

Thanks! That helps a lot. I’ll try out Metaballs and see how it goes.

Hmmm… looks like I never got around to updating the windows package with the examples. I’ll have to dig back and figure out what went on there.

Genete, I tried Metaballs but the background is black. I changed it to alpha, but that leaves me with only one color field. Also I can’t seem to reduce it in size due to which I can’t particle-ize it. But I tried working without the particles and used Noise and stuff.

Any tips and suggestions for improvement?

In the parameters tab of your metaballs, there should be a “gradient” parameter - by default it would be white going to black (unless you’ve changed it)
So, I’m assuming you’ve changed the black in the gradient to alpha of 0, by double clicking on it and using the gradient editor (?)… if you right click on the gradient in the gradient editor, you’ll get a pop-up menu with “insert cpoint” and “remove cpoint”… now you can have all the colour fields you want
And to reduce the size, you’ll see in the parameters tab “radii” and “weights” - expand these and bring the values down
hope that helps you make the elements

ps, I’ve found metaballs can cause a crash if you add and remove points one too many times, they’re difficult little buggers

on second thoughts, don’t play with the weights, it’s buggy

To make metaballs ork properly all the three parameters should have the same amount of items (radii, weights and points). If one of them doesn’t match it can crash, yes.
This layer needs some better interface for edition indeed.
-G

Metaballs are tricky lil buggers, ain’t they? Ahahaha I like the effects they can create though. Thanks a bunch, guys!