That’s exactly what I need to learn now for my project, but I can’t open your files. How can I do that?

You should be able to download them and open them in Synfig. What step is failing?

Yes… I try to download and open, but Synfig gives me this message:

Similar thing for the file centipede-2.sifz…

I’ve just tried centipede-2.sifz and it doesn’t open for me either.

The error output is attached.

Looks like I didn’t write properly the procedures to load old files when added the homogeneous option in the new version for Link to BLine value node.

Please open a bug report for that and I’ll (or someone else) would fix it as soon as possible).
-G

Swell! I found out that Synfig manual has some “Following a BLine” instructions as well. I tried to rely on these ones for my animation test.
I drawn an elliptic BLine and made an improbable satellite follow it.

I premise I know that, talking about lights, physics, astronomy, this animation doesn’t make any sense. I was just interested in testing the “following a BLine” method in a rather complex animation.

Here it is the result. http://www.youtube.com/watch?v=5e8vgT6VBgk&feature=youtu.be

Inspired by Genete’s remark I’d like to use this technique to make a snake tail: I link the size of the scale to the width of the BLine, but the the space between each scale is linear… is there any way to make the smaller scales closer one to another than the big ones (eg: perspective effect emulated by making the position on BLine varie according to line width) ?

smaller scales look too distant from each other. 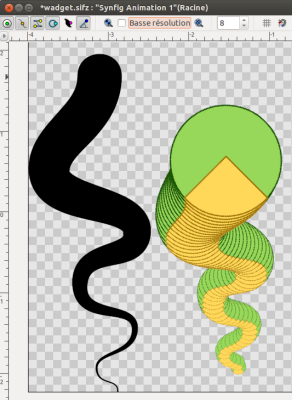 I guess some Logarithmic scale could do… but cannot figure a formula that does this neatly, any suggestion is welcome.
Berteh.
wadget.sifz (3.23 KB)

Please ping me later for this. I don’t have Synfig Studio at hand now!

smaller scales look too distant from each other.

I did some more testing and it turns out unsetting the “homogeneous” attribute has already a good impact on solving my problem (see below).

I’d like to go even further (ie. have a BLine length computation scheme that artificially “exaggerates” the length of narrow sections and reduces that of wider sections), and will try to find some. Any input is welcome. Do you believe it’d be useful to you too?
B.
wadget.sifz (3.23 KB) 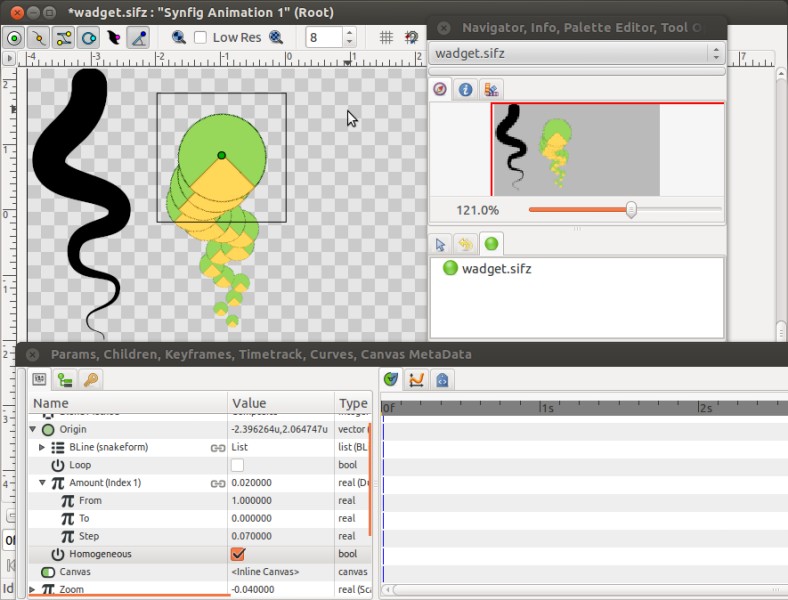 Using Link to BLine feature for that is tricky. Once you get the desired shape with the right formulation for the initial shape of the BLine, it will be ruined once you start to animate it, because it would be extremely difficult to keep the overall length of the BLine (in case of it is homogeneous) or the individual length of each Bezier (in case you use non homogeneous).

I did a quick test with other approaching ad started to work very well:

I discovered a bug that consists on that the duplicate layer produce bad tile render for exported canvases and that made me stop the test. But I think it is a better approaching because you can control the movement in one place only (the own canvas of the exported circle)

I hope this helps you.
-G

Thanks Genete for your proposal. I’ll try it.

Meanwhile I found what might be a bug to me: the width of BLine seems to not be interpreted satisfactorily when using advanced outline, see attached screenshot and file, the size of the red circles should vary as do the yellow ones. Zoom of yellow is linked to (simple) outline width, while zoom of red is linked to WidthPoint List (advanced) outline.

or is it not the intended behavior of advanced outlines? if bug I can post it to new bug racker system… or try at least.

Thanks again for your nice work!
B.
wadget-fixing width.sifz (2.62 KB) 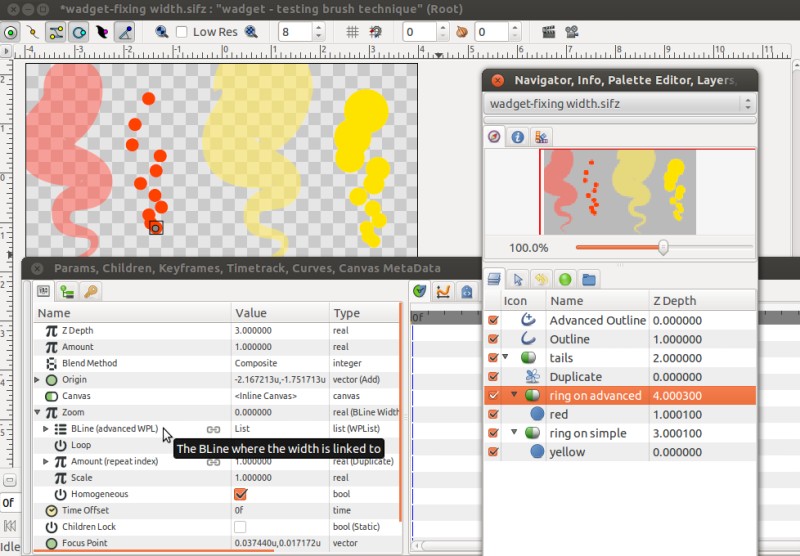 And no, there is not a “Link to WPList” feature coded. If you do a Link to BLine feature for a width parameter you will use the widths of the BLinepoints (that are not used in an advanced outline to perform the outline width).

It is a missing feature indeed.

What you can write to the issue tracker is to request a “Link to WPList” convert type for real values. (only for real because the WPList only returns a width based on a BLine position and its internal parameters).
-G