Bone origin / pivot point in wrong place, how to fix?

I am new Synfig user, and trying to make animation with bones. Or actually, trying to learn use synfig so that I can teach my daughter to make her own animations.

I have serious problems animating with bones. I have ended up many times to situation where bone origin / pivot point / is somewhere else than it looks to be when looking bones green dot.

I would like to learn how to fix that location to be correct. I’ve searched here and found few other topics with similar problem, but none of them explaining how to fix problem. There seems to be several ways to end up to similar problems, and I have also done it with synfig drawn objects

Im start to using bones again because in the past I hve some problems with they.
I think that you problem could be because you select more things that you need select to link the bones, the pivot point could be in anywhere you only need to select the GREEN ONE of the parent group of the part that you want to link, then shift and select the GREEN ONE on the bone and Right click over the bone pivot and select LINK TO BONE, that is how I do it and it works perfect, when I return to ma home I’ll try to post some graphic examples.
Pd: and try to dont change of place your liked pivot points after link it.

I got this particular case solved with removing skeleton and removing upper groups. However, I don’t like this ‘remove and redo’ approach on fixing. I’ve got this same kind of the problem with synfig-drawn objects.

Is there some way to see where that pivot point is, and possibility to change it?

Hello and welcome to synfig.
The problem with bones and their pivot points is indeed quite common.
To see where the pivot point of a bone really is, you need to place the skeleton layer directly above the layer it should affect.
Most of the time, you will have an outer group that has moved and thus the skeleton will move if you put it inside that group.
In your case I suspect that the group containing the whole pony was moved and the skeleton added later.
To avoid that problem, always place the skeleton inside the group containing all other parts of the character.
To fix the problem without relinking, place the skeleton layer inside the group causing the displacement, move the group linked to the bone towards the bone, then move the bone back to the place, where the part of the body was supposed to be.
I hope this helps for future problems.

This is a: Synfig Linking and Disconnecting Bones MiniTutorial: 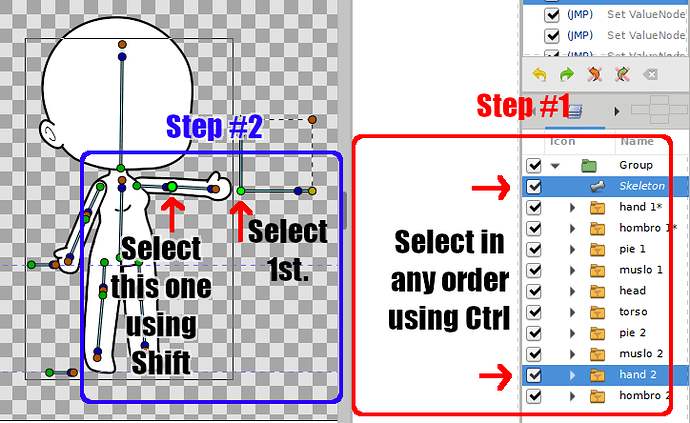 You only need select the Green Pivot if you select more pivots could cause troubles, because they control another things like rotation, scale and inclination. 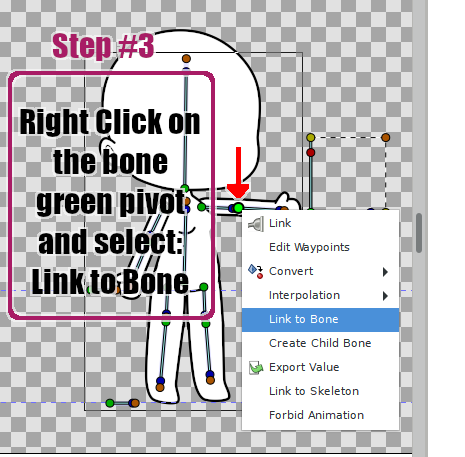 if you need “UnLink” a Bone from some part you must diconnect it, to do this you must select the part that is linking go to parameters panel then in the part that say: Transformation, just right click and select; Disconnect 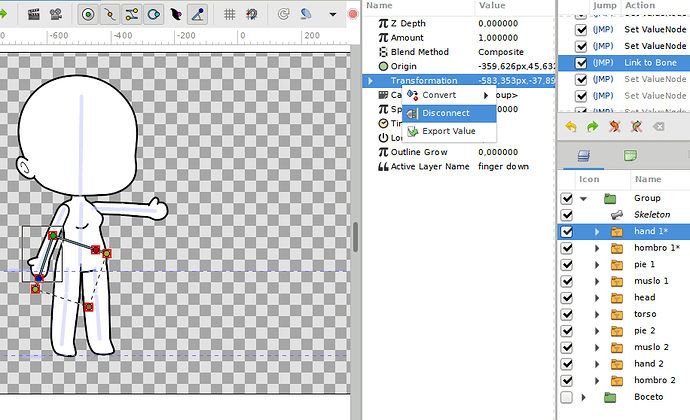 You can repeat this with all the parts if you need relinking all again to fix it. try dont copy paste linking parts or skeletons because this make some troubles.
And remember respect the hierarchy of the bones. 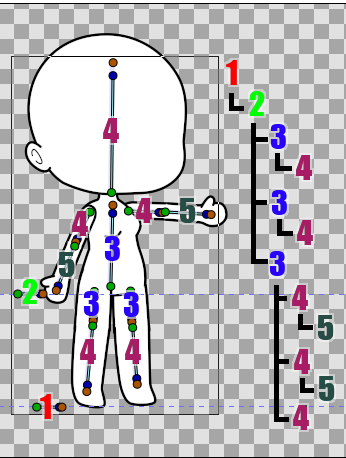 you want to play with it, so if you mess up something you will not lose your work
.

Thanks, this is what has been happening. Fixing did not seem to be that simple, group of pictures was scaled down heavily, and moving skeleton to same group made it miniature size. Only way seems to be remove skeleton, and create new.

But thanks for you comment, now I think that I can avoid this in future. To be seen is it true

Returning to this partly. Daughter had character which had few parts that were duplicated, rotated, or what ever. Linking to skeleton works in such way that as those parts were on their original places. Solved this with following procedure: