I’m working with Synfig and Blender in my small game project, but i can’t properly animate the textures, i have two problems at the moment that i can’t solve yet; if i want to use a image sequence as texture or video as well, i don’t have the animated result in Game Render or Blender Render, just a random frame of the whole animation, at the time of testing i have this already setup:

-Viewports with GLSL, Textured Display
-An UV Unwrapped object, be it a cube or a simple plane (in GE, animated texture is enabled)
-A basic material, merely at it default state
-A Texture with Sequence/Video Type, in this case a sequence of 12 images
-Image options: Premultiply, Mapping: UV Flat, Image Sampling: not alpha and box filter, not mipmap and no interpolation, influence in color only
-Settings for the sequence are:
(1)Frames12 (assuming that each frame is an image of the sequence and the number between parenthesis is the current frame )
Start:1 - Because i want the sequence start at frame 1
Offset: 0 - Because i want the first image being the first frame of the animation
Fields: 2 - As far as i understand 2 is the average number for 24 fps, while 4 is 12 fps, more or less.
-Same settings in GE UV Unwrap mode
-Auto Refresh and Cyclic are enabled.

After all this, the animation is somehow working by pressing play button or with arrow keys, but trying to render the animation or pressing P for Game Engine only shows a static version of the supposedly animated texture. what i think i need for a properly animation with textures is keyframing the image sequence in actions/dope sheet window, but i can’t find how to do this, i see options like animate the offset or the position, but nothing related to the sequences.

Long story short:
1.- Can’t visualize the texture animation in Blender/Game Render
2.- Can’t find how keyframing the animated texture (sequence and/or video), i find this useful for ‘actions’ in further projects

again, excuse me for posting something related to another software, =( 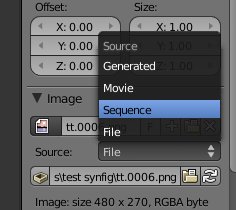 hi mad0, i’ve already set the type of texture, animation for video files play in Blender Render now, which is nice, but i would like to know if somehow i can keyframe the image sequence, this is because i have an animation of a track for a tank, it would be handy for me to have the control over speed of the animation according to the tank’s velocity, since i know nothing about python and all i have are the visual interface of Blender, i though i could use the action editor for this, but i can’t find how

I searched on french blender’s forum, I found an answer, but I do not know if it works:
you must adjust the number of frames to 1, and insert keyframes on the offset.
Good luck !

I searched on french blender’s forum, I found an answer, but I do not know if it works:
you must adjust the number of frames to 1, and insert keyframes on the offset.
Good luck !

no luck =(, looked like a pretty good idea to me and makes sense, but keyframing for offset, frames and start does literally nothing, information is not recorder in the keyframe, the keyframe is inserter and modifying it number, for example, offset:0 to offset:1 to the next keyframe, keeps offset:1 for the anterior keyframe, it does not make sense to me, makes things unnecessary harder for users =(

still without luck, thanks for your support pal, but i’m giving up this, is just impossible to do and no documentation or Blender forum will answer this problem, i posted again in Blender Artists again, but i don’t really hope for an answer now blenderartists.org/forum/showthr … ost1743904 i wouldn’t be surprised anyway, thank you again for your help mad0.

hello H13N.H3N
I tried again, and with the latest version of Blender 2.55, it works.
The offset is the number of the image you want to display.
You must settle the points of curve on a constant interpolation.
There is the blender file as zip, I cant pack the textures in the .blend.
test.zip (69 KB)

hello H13N.H3N
I tried again, and with the latest version of Blender 2.55, it works.
The offset is the number of the image you want to display.
You must settle the points of curve on a constant interpolation.
There is the blender file as zip, I cant pack the textures in the .blend.

I see now, i had this theory days ago in that the textures can be keyframed with the DopeSheet, but for some reason the animation can’t be used as an Action in the Game Engine, unless i’m doing something wrong, after calling in the Actions editor the animation, all the keyframes stop working, and rendering in Blender Render again proves that the animation no longer works as it did before calling in Actions editor =(