Tried the preview and it went through all 600 frames just fine.

Is this a known bug or am I doing something wrong?

Can you make a screencast?

Okay now I know it’s something in my project causing it, not Synfig. I’ll see if I can find what it is and let you know.

Thanks all and happy holidays

Found it. It’s the soundtrack.

If there’s a soundtrack somewhere in your layer list that is shorter than the combined frame time of all the layers the .avi file will be rendered to the length of the soundtrack, not to the total frame time.

I went back to the experiment above which is fifteen seconds long. I made a five second audio clip and then imported it as you can see in the layers panel - 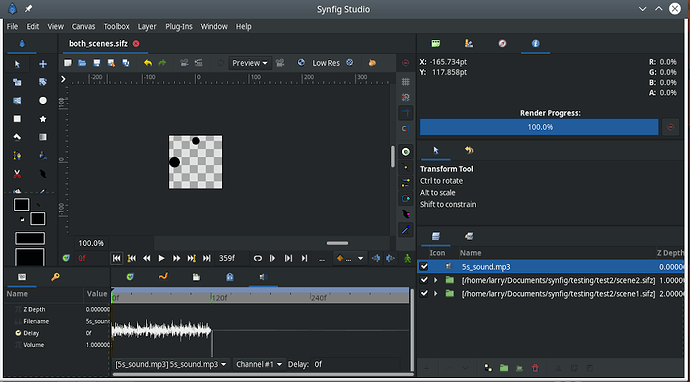 Also even though the soundtrack itself is between 0f and 120f the entire track will play regardless of whatever time frame you start the render at.

So if anyone out there is having this problem just make sure your soundtrack is the same length as your video and you should be fine.

Fix will be available in the next development version: https://github.com/synfig/synfig/pull/2477