So I’ve got a background that should feature a river flowing downstage to upstage and then off to the right-hand side: 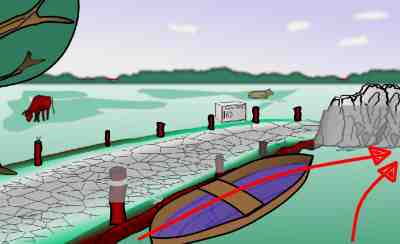 I’m wondering what the best way would be to animate that.
What I’ve come up with so far is:

This kind of works to the extent that I get an impression of a river that endlessly transports leaves and sticks from downstage to the big rocks.

But the river flows straight ahead onto the rock, as it were, and seems to go “underground” there. I’d rather have it start at the bottom flowing at an angle of around 30 °, and then gradually transport the sticks and leaves sideways in a curve out of the picture below the rocks, the way the red arrows run.

So I haven’t arrived yet. Any ideas on how to improve the approach? Do something entirely different instead to achieve the effect?

It should be possible to adjust your warp layer in order to fix the issue with leaves flowing into the rock instead of around it. I gave it a shot with some success although it created noticeable distortions on the leaves as they passed the bend. 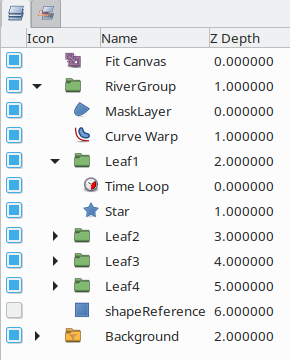 Your approach works, but the warp layer requires a lot of computation and slows down rendering. Have you tried using a transformation layer instead to move leaves along the river?

Great! It seems that Curve Warp is the effect that I have been looking for. I’ll have a look and learn and experiment.

As concerns my Warp choice, I don’t have any particularly good reason for that, apart from using what I’ve already learned about. I don’t know all that much about Synfig yet.

I’m using Synfig to animate Point & Click adventures. So I’m far below animating proper cartoons; I just do some simple things like getting ventilators to turn, cows to wag their tails or character walkcycles.

So one of the things I often need is walkcycles downstage-to-upstage and upstage-to-downstage. Nearly all the characters in Point & Clicks need that.

I’ve found by experiment that I get a passable animation for the arms and legs when I simply Warp the whole of them, i.e., upper and lower leg and foot combined, so that the front foot becomes exaggeratedly large and the back foot exaggeratedly small. Likewise for the arms. With some additional corrections you get a passable walkcycle with very little animation effort.

So that’s how I learned about the Warp effect specifically. There are lots of layers that I’ve never looked at yet. I’m hoping to become better and more knowledgeable with time.

So if I understand you correctly, this would mean

I’m sorry, when you wrote “Warp” layer I thought you meant the Curve warp layer and had a file similar to the one I made. My render time comment was about the “Curve Warp” layer specifically, but other distortion layers like the perspective layer are not as demanding. Either way, if it’s not slowing you down too much then it’s fine. Use the methods you are most comfortable with.

As for the other method, it’s like you said. I’ll post a file that uses group layers to handle scale and motion. There’s also an additional nested group layer that adds rotation in perspective without the need to draw in perspective. It may look like mode-7, but it’s a fast and easy trick. 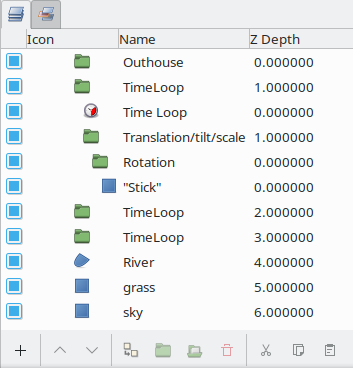