I have just started out, and I have read a few tutorials. My ultimate goal is creating an animation for my junior secondary schools movie competition. I would like to use this program in a combo with Blender 3D (for some objects), and Wax Debug for some after effects. If this program is really what I want it to be, I might end up using it in the future to!

Although I have grasped the basics, images stil seam to be a blur to me. When I import a PNG with an Aplha channel, Synfig ignores it and instead I get a lovely black background where the alpha channel should be. In the tutorials I watch the alpha channels are imported with the .PNG

Could someone please enlighten me on the subject

(If it makes any difference I am using a program called Pixelformer to create the Alpha channels.)

I’m no pro but I’ve been having good luck with my png’s created in gimp. Can you reply and attch one of the images that’re giving you problems?

I go to the Caret Menu > File > Import and get a nicely alpha’ed image. 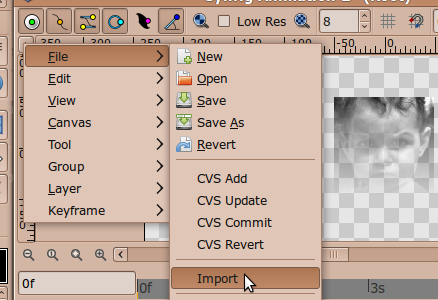 [final edit] I’ve played with all .png options in gimp and can’t get Synfig to choke. What are your system specs? (OS, synfig version, etc.)