I agree with Genete, current behaviour is generally working well, BUT there are a few things that can be improved…

it will be nice improvement. added to my list

the clicking on time scrollbar or soundtrack will stop playing as well.

1) clean up the buttons without modifying their functionalities.
1.1) rename the stop to pause
1.2) rearrange/organize these buttons in a clear way
1.3) redraw buttons icons
1.4) hide the soundtrack since we don’t support sound currently
1.5) try to merge play and pause buttons and improve the behaviors according to rylleman’s input.

How about using an animating icon to indicate rendering status?

see the attached for more detail, it is nice to build animated UI mockup in Synfig Studio.
preview_window_rendering.mp4.zip (202 KB)

Coolio as itself!
-G

Good idea with an animated icon!

Beware on compatibility of Gtkmm versioning. Please be sure that you don’t use a Gtkmm version higher than the current one which is the 2.4 series. It is probable that the aniamated icon is a newly gtk addition.
-G Will it help you if I add a new previous/next rendered frame for playback widget? as following:

or you can ref to the above mockup.

I didn’t know this functionality at all, thanks point it out

I always wondered why we have to wait till animation is rendered before PREVIEW. I understand it has to be rendered before exporting, but preview? As we can move freely in the timeline and synfig is basically vector program so no rendering is needed, can we in preview just move through timeline w/out rendering (just showing frames, pretty much like you would “preview” it by dragging current frame scrollbar, only difference it’d be that progression would be at specific rate).

Most PCs aren’t fast enough to do this in realtime. It may be possible for simple cases featuring only a couple of layers, but when you start getting multiple complex layers, your preview will not keep up in realtime.

The improvements to the Preview window look very exciting. I was wondering, when you’re working on the Preview window, could you make sure it has a “close” icon at the top right of the title bar if you are using GNOME 3.x? 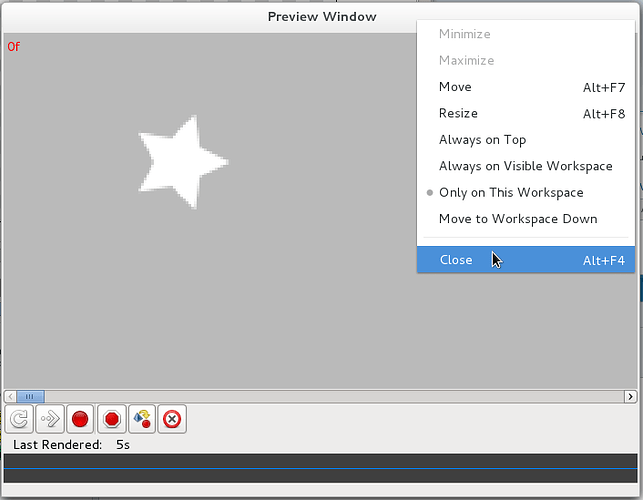 At the moment you have to right click on the title bar and then select close.

In GNOME 2.x the preview window has a close icon, but in GNOME 3.x it is missing.

Pressing the ESC key will close the window too.
-G

Oh, and Darkhog - the play button under the timeline should behave as you describe…

In GNOME 2.x the preview window has a close icon, but in GNOME 3.x it is missing.

The current version of preview window is implemented in a dialog widget, but Gnome 3 simply does not include close buttons on any dialogs

I planed to use Gtk::Window instead, that will fix this issue as a side effort

I planed to use Gtk::Window instead, that will fix this issue as a side effort

That’s great! Many thanks for all your hard work - your new icons look fantastic.