First of all, thanks a lot for this great tool!

I like it very much, but I’m having one little problem:

I’m having this rounded rectangle without filling:

Now I want, that two points are starting at two points on the border, and then they’re drawing the rectangle. How to do that?

Have a nice day,
Matthias

I meant the following:

Then they should draw a bit, until I get this:

Have a nice day,
Matthias

By any chance do you want something like in inkscape a rectangle with rounded corners?
If so get inkscape make an rectangle object to path export to simple svg and import(look for svg import builds)

Right off the top of my head, if I were to do this, the first approach I think I’d try would be to use animated “alpha over” shapes (one for each half of the rectangle) to gradually reveal a rectangle that was already there. The straight sections could be easily auto-tweened and then I’d probably frame-by-frame the curves.

To make a rounded rectangle in Synfig. I’d start with a bline circle, and stretch the tangents until they nearly meet at the corners. Animating the rectangle like you describe would be tricky. I’d be inclined to try just unmasking the finished rectangle using alpha over, or maybe applying a gradient to the line and animating the gradient, or animating the width of the line (may not be very easy to control how uniformly it comes in).

Synfig’s rectangles all have square corners. I don’t know how (or if) the SVG importer would handle rounded rectangles.

Synfig doesn’t have a native representation for rounded rectangles. 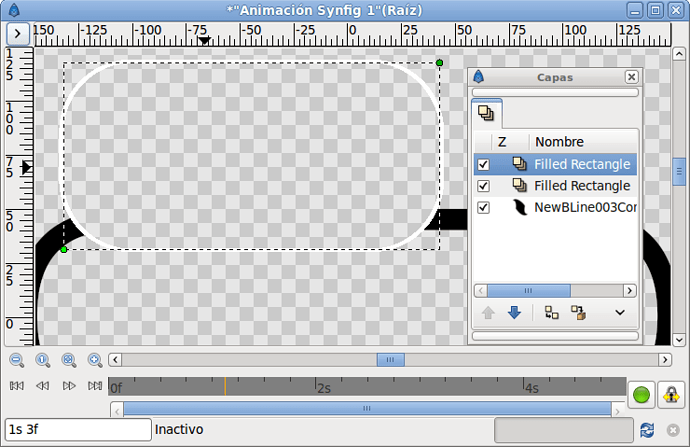 As genete points out, there is an example layer that does curved rectangles (it’s not distributed under windows by default). You’d still have to figure out how to do a slow reveal of it.

Thanks a lot for your ideas!

But I must admit, that I’m not having this experience with Synfig, I’m really a newbie.

Could you explain me the easiest way a bit more in detail, if you don’t mind?

Has nobody an idea?

Here is a very quick and dirty approach to animate the gradual revealing of the rectangle. Hope I understood the question properly and, please note, I did not use a rounded rectangle here, but the approach would still work. The YouTube link shows the result and the Synfig file is attached below.

Thanks a lot, that looks great.
But how to make the edges round?

Thanks a lot again!

Thanks a lot, that looks great.
But how to make the edges round?

Thanks a lot again!

Use the Bline tool and insert a vertex on each change of curvature of the rectangle. Use the grid snap to easy fix the ducks to the proper position: 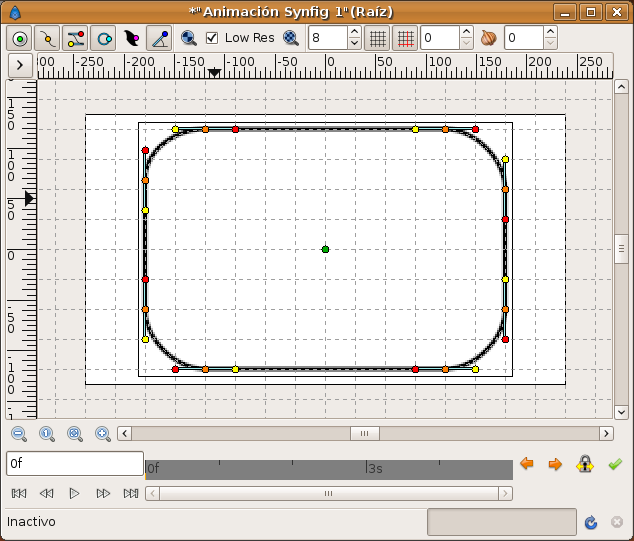 EDIT: Notice the wrong place of the tangents of one of the top left vertexes.