Parameters (real/vector) are displayed with a large number of digits after the decimal. The defaults are:

(“display” is how many you see browsing the params panel, and “edit” is how many are shown in the edit textbox when you click on a value).

I doubt that anything actually kind of precision. It overcrowds the UI space and is most likely the cause of values being displayed as “67.999999998” rather than “68.000”. 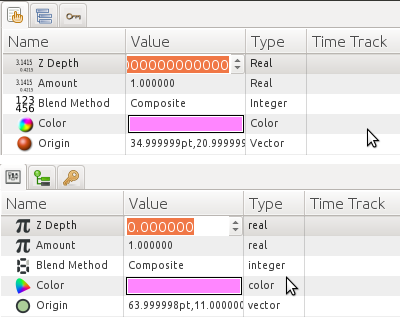 We might also consider getting rid of the “X:” and “Y:” labels when editing vectors: 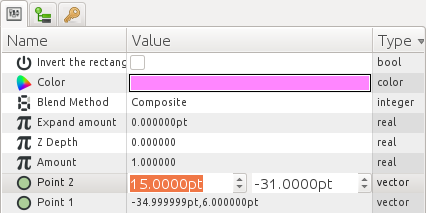 So my questions are: what precision do you actually need? Would removing the X/Y text to save space when editing vectors be a good change?

For me 2 decimals are well enough. x.xx

Couldn’t there be a low decimal number as default with an option for the user to display more decimals? I’m for more user decided options in the settings panel.

Also, the font size of the spinbutton can be a bit smaller if needed.
I agree on both proposals. I also nod on the number of decimals as an user setting.
-G

I agree that a user option would be best, mostly because different precision is required depending on what units you use for the document. I’ll put it on my todo list.

Should I change the hardcoded constants for the upcoming release, or wait until I have time to properly implement user options?

For me 2 decimals are well enough. x.xx.

for me too, i like the feeling of sharp precision, i have no problem at all because every time those kind of decimal values are selected, the whole ‘text’ is also selected and is enough with just type as soon as the input box has focus

Should I change the hardcoded constants for the upcoming release, or wait until I have time to properly implement user options?

I think it is a minor change that shouldn’t affect any normal user (I don’t know anyone that works on km or miles) but I would use x,xxx instead of x,xx, because there is another issue around apart of the units: the zoom level.
So hardcode it for this release and let’s include the new user option in the next one.
-G

Beware that some parameters use values that aren’t units size and that its default value is really tiny: See plant layer
-G

What about a precision per parameter? there is a default one defined by the system and a selectable one per layer parameter. Maybe current interface would be a instance of the layer but in the future there can be a preferences per layer system (which could include the default static option and the default blend method by layer)
-G