Hello! I was wondering if anyone knew how to fix this looping issue. I attached a png image showing what happens when I try to draw circles with the draw tool as an example. I’ve already tried uninstalling and reinstalling the software. I am using version 1.4.4. I will also add that I’ve tried playing with the draw tool settings such as Auto Loop, Auto Extend, and Auto Link but turning any of these settings on and off doesn’t seem to make any difference. As if the checkboxes for these tools aren’t working at all. So I suspect there is some sort of defaults save file that maybe doesn’t get deleted when uninstalling an old version? Any help would be appreciated. Thank you. 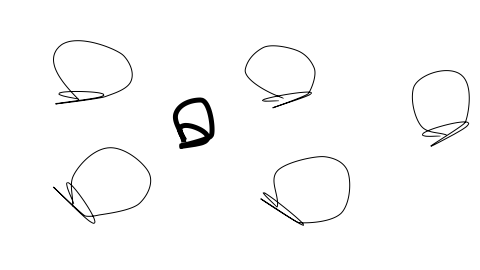 I also forgot to mention that I’m using 1.4.4 windows 64 bit version. Also also I upgraded from 1.4.2 windows 32 bit version, which is why I asked towards the end of my original post if there might be some sort of old files somewhere that a typical uninstall wouldn’t get rid of. This issue was not present when I was using the 1.4.2 32 bit windows version. Later I might try going back to that to see if the issue persists on the old version now.

Update: I tried version 1.4.2 again and the odd looping doesn’t happen. Also I’ve found that it does happen on both the 32bit and 64bit versions of 1.4.4

I captured another image of what’s going on it seems its not so much looping as it is for some reason the last two vertex handles have backwards tangent handles.

I proposed to backport a fix to this problem, maybe it’ll be on next stable release.
The next development release won’t suffer this issue.

Thank you for the reply! Sorry for bringing up old news though. I’ve also noticed a few more quirks having to do with backwards tangent handles, for example with linking two tangent handles. If I download the latest development version (1.5.1) and these issues don’t exist in it. Is it safe to say that they’ve already been resolved and I don’t need to raise these issues here or anywhere else?

You can raise the issue here, yes. While we actively develop new version of Synfig Studio (with a lot of internal changes/cleanup), we try to maintain the stable version more… stable (avoiding some more disruptive internal changes, that can introduce bugs or regressions).