The situation I’m at is easily overcome by a simple redraw, but I’m more interested in the answer for future, more complex situations. I’ve got a simple head. The hair was drawn as three seperate BLine outline layers. I’ve linked the origins and the endpoints so it basically edits as a single stroke, but how would I go about actually joining those segments into a single BLine? 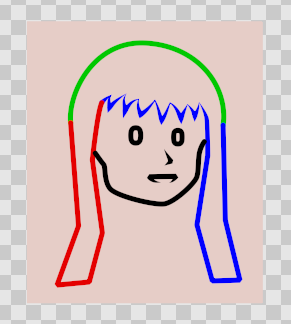 Here, as a learning exercise, I looped the outlines and sewed them together as shown in the wiki… 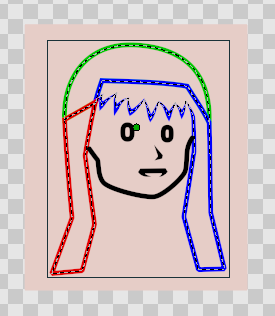 How can I get a single outline that encompasses that area? If there is no simple answer, what’s a more complex angle of attack? Can I get an editable file output that could be manually manipulated? Are there plans for an API that would allow a script to walk around that region? Discuss?

OK, I didn’t know about saving as an .sif. That gives the XML formated file for editing.

I exported the vertices of the three BLines using unique ValueBase Node names(Hr1, Hr2 and Hr3), then disconnected the BLines from the exported values.

Next I saved as an .sif file and opened it for editing in gedit.

… that collected the sections all under id=“Hr1”.

When I reloaded the file its only exported value was a BLine list named Hr1. 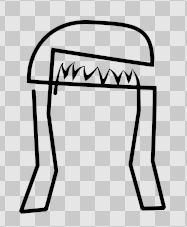 That shows me it’s doable. When I figure out the exact sequence to achieve the expected results I’ll post it. Unless someone has got something simpler.

Hi BentFX!
In fact there is some part of the code that adds two blines. When you use the Draw Tool, there is one option to “Extend Bline” which means that if it detects a bline end or start when you draw a stroke, it will add the stroke result to the previous existing bline and result in only one bline.

The reason of having the bline twisted is because the bline has a order of the bline points. It just need to reverse that order to have he opposite bline and a good connection.

There is none working on that area at the moment. It would be great to have it!
-G