My name is Shawn. I’ve been interested in cartooning and animation since I was a kid. Just turned 30 this year. I haven’t done anything cartoony for a while now and just felt the need to get back into animation. I’ve never done anything serious.

What drew me to synfig as opposed to other animation programs was that it seemed to be the least complicated out of the free software I was looking through. The technical aspect is taking a bit of learning, but I feel this would be the best way to go when tackling animation solo. Anything that keeps the steps to a minimum. I tend to overcomplicate things well enough on my own

For me, the messy stuff would be inking and coloring everything. I could spend a lot of time doing that frame by frame. So less time, less hassle. Just trying to figure out the software for now.

The end result I’m hoping for is to create a cartoon series I can post on YouTube. Shorts. Nothing extravagant, though I’ll see where things go from there.

Hi DrawingForward, welcome to the forums!
We are pleased to have new people joining the community. Please feel free to ask here any question you might have about Synfig and Synfig Studio.
One place to start learning Synfig is doing the tutorial examples of the first chapters.
wiki.synfig.org/wiki/Category:Manual
Good luck!
-G

Thanks Genete, its a pleasure to be here

. I’ve been digging through the tutorials today and trying to find out what I can about how to make things work. I was able to create this from what I’ve gleaned off of the tutorials so far http://www.youtube.com/watch?v=QndiyIHaA9g

He was fun to put together. I hit a few snags, but the docs were a big help. I was working on him all evening. I don’t know what I’m going to do when it comes to figuring out full character animation though

Good one to be the first usage of Synfig Studio!
Looking forward to see more!
-G

I’m using these guys as inspiration.

I’d like to make something similar. Not a carbon copy, but a close shave. I’ve been thinking up ideas for the last few days (and trying to think of ways to pull off some decent animation with as little effort as necessary). Not to say my standards are low, but if I can get more out of less then I’m all for it.

I think I’ve hit a snag.

I can rotate and move objects, but not sure what to do when reshaping complex forms. I was hoping to avoid manual frame-by-frame animation, but I think that’s what’s going to work best with my style. I’m looking into non-vector alternatives, thinking I might give Pencil a shot.

Sorry to quit so soon. 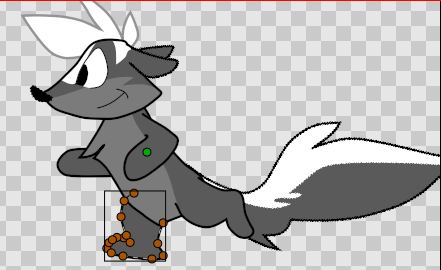 @DrawingForward: A belated welcome to the forum!

From the for-what-it’s-worth files: I find that a combination of Pencil and Synfig gets the job done for me. I tend to use Pencil for for frame-by-frame stuff and Synfig for anything that lends itself to automation and/or filter effects. I usually end up “inking and painting” the Pencil frames in Inkscape, then compositing that together with Synfig-generated frames in a separate editor (usually the Blender editor in my case).

Thanks, Muhkayoh. Yeah, I’ve gotta find what works best with what. A hybrid approach might be best in some situations.

I find that Pencil is great for sketching out animation on the fly but from what I gather, it doesn’t handle automated movement from one point to the next yet. Synfig handles that great on the other hand.

I find that Pencil is great for sketching out animation on the fly but from what I gather, it doesn’t handle automated movement from one point to the next yet. Synfig handles that great on the other hand.

Yes, the two packages have basically opposite strengths and, therefore, can compliment each other almost perfectly. Of course, compared to all-in-one packages like ToonBoom’s Animate or Adobe’s Flash, this can seem like a real limitation, but I found that I easily adapted to this sort of work flow.

All of the above doesn’t mean that you can’t do efficient and good character animation with Synfig. In fact, Synfig can actually work quite well for character animation depending on the shot, the character design/construction, and the overall animation style. For instance, doing a run cycle with the relatively simple little character you’ve designed (which looks nice, by the way), you actually could pull that off in Synfig and probably still beat a traditional or Pencil fbf approach in terms of efficiency. In a nutshell (and I’m probably not telling you anything you don’t already know) you’ll want to keep what I call your character construction (as opposed to character design) as simple as possible. In particular, you’ll want to keep the total number of vertices (or ducks, to use the Synfig term) as low as you can and still get the range of motion that the shot requires. Doing so makes animating the character much easier. As I look at the foot in your Synfig screen shot above, my first impression is that you could describe that shape with a much lower duck count, which would in turn make animating it a lot less tedious. (Of course, I’m making a snap judgment from one screen shot, so I could be wrong here.) The other thing you’d want to watch out for is when and where to break a character’s construction into separate pieces, again with an eye toward making the animation process faster and easier. Again looking at your character above, I might for instance make that tuft of chest fur a separate piece to a) help keep the overall body shape simpler and smoother and b) make it easier to animate the tuft with its overlapping action. It’s an often esoteric balancing act: at times, less is better/easier (as when reducing ducks), while at other times more can be better/easier (as when using additional pieces to construct the character instead of doing it all in one).

Anyway, I’m not trying to earn a Synfig “sales commission” but I thought I’d throw these ideas out there on the off chance that you hadn’t already thought through them yourself.