-creating a school of animation
why? because the trail of collecting informations is a hard one! and the beginner is getting turned back in front of the adversity! it would be be so much netter to centralize all the tutos and tohave them check by a pro of “coaching”… to create a “progression in learning”
…
-stating clearly the advantages of synfig, against all the “competition” ( not only on the monetary bases!)

Hi,
it is obvious you don’t know Synfig for a long time

About a school: it already exists, you can meet @KonstantinDmitriev there:
“Adamant” Art School
Lenina Street 144
Gorno-Altaysk 649007, Russian Federation.

About a network of “teachers”… Well, you can find lots of tutorials on Youtube in many languages, where everyone can edit subtitles or even voice-over in their own language.

Fundraising ? It exists for several years !
You can do it through Patreon, donation on the website or even Bounty.

About promotion, here are some examples (more info on Morevna Project’s website):

Ok, I am back from my trip and ready to share some results! First of all, much thanks to everyone who sent their words of support for my initiative. It was really awesome to have that feeling of being backed by whole community.  ^__^ In that...

A few days ago we’ve got a visit from one of our Patrons! Sam Muirhead (http://cameralibre.cc/) traveled all the way from Berlin to Gorno-Altaisk to meet the team of Morevna Project. Sam spent 5 days at our small town shooting a video about our... 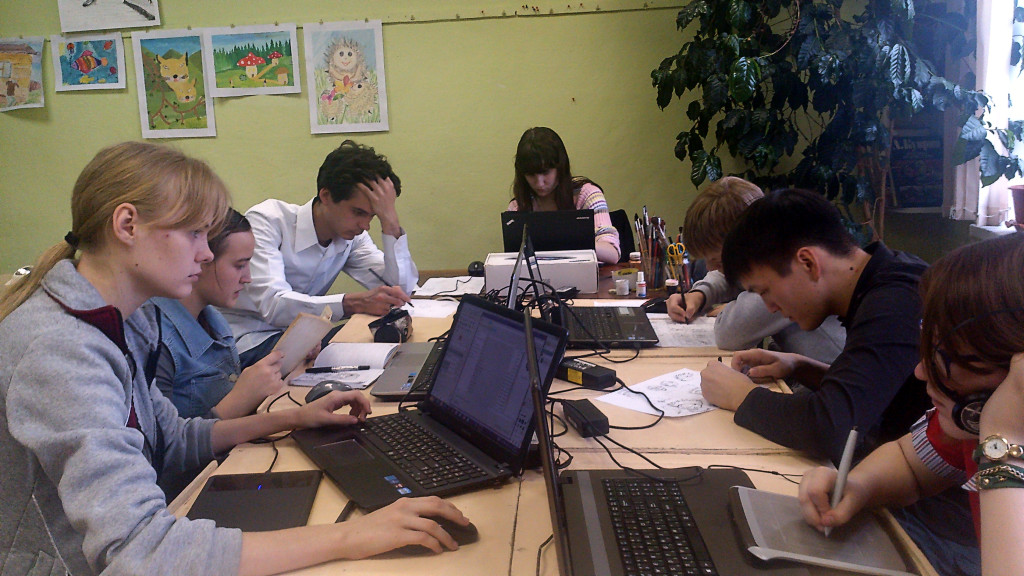 Media researcher Julia Velkova took the trouble to visit our small studio at Gorno-Altaysk and met the core team members. With this guest-post she is sharing her first impressions and revealing some “behind-the-scenes” of Morevna Project. This post...

ok, my appologies, ans yes i did look at the morevna project…
and your answer stop the discussion about critics,suggestions,
maybe new ideas but new ways to attein the goals…
how come their is only one project ?
is their only one style of animation?
why the attendance of the forum is so low?
do you think 636 dollars is a sucssesful fundraising ?
on bounty their is 0 dollars and a lot of “issues” why that?

About the differents styles you can check the artwork section to have an overview of diffrent styles
https://forums.synfig.org/c/artwork
There is not only one project

Synfig is open-source, its code is available on GitHub, anyone can contribute.
Konstantin has taken the lead de facto as he was using Synfig in his school and contributed to the code.
Fundraising and bounties are just made to help development with profesionals, it is non-profit, goals are only given as reference, not absolute.
The codebase is huge, quite dependant to GTK and complex, not well documented as it has grown with patches, so you can’t play with the code without a minimum of implication if you don’ want side effects.

Thats why it moves slowly.
Attendance is low as it is mostly for support.
For help/documentation, there is the wiki and videos on Youtube (it would be nice to group tutorial videos by types on the wiki by the way ^^)

on my side…(point of view!)the wiki is a mess!
i applied twice and still waiting for a confirmation mail,so i can work on it!
i understand the issues coming from the place of coders…even if i am not incline
but with my experiments 40 years on and off in the 2d/3d/video world…(combustion, maya,3dstudio,afterfx etc) i have ,somehow an " lighted",educated, point of view!,
i worked in the us with people of dreamworks,pixar and others who used big machines and expensive soft… and i can tell now,their is a dysfunction in the whole system!
the students education is made often backwards!
the goals are not well defined, the rules not really sets, the budget often not a the dimension of the task,and the leadership weakened by a battle of egos…
all those "minor " problems comes from (on my humble opinion!) to what a call a god complex , and mirages that we sell to the kids ( like animation is easy) when it is now a engineer job who works on powerful machines
just to start!(the list could be long!)…
then after the first enthusiasm of wanting to give life to artwork , many dropout in front of a wall of the coders world…which are almost 2 antinomic “worlds”…the scientists and the “artists”
my ideas ,mostly , are tainted , for building a “bridge” between those 2 worlds… and to begin with we are to define a commune language (translation are tedious ans suck a lot of energies)
ok , and we are not going to all learn Esperanto!
so what do we have?
the “visual” language… we are to learn how to make tutos… to develop a communication skills ,where natives languages are not needed! i know it has being some trials about this ideas…
what we need is a structure, a protocol,a “grammar” ,a lexical (visual one!)
this could be a very good task to give to students to develop! the making of a new visual language ,international, without worlds…
and animation is the perfect tool base for that…( language of signs?)
those are…my 2 cents ideas (just the beginning) and i put them on the table hoping for a constructing debate…