How to do animated line

I’m newbie on Synfig Studio. I created like five easy animation as animated menu for digital signage. I don’t know if this gives you an idea about my skill.
Now I’ve a new project. I would like to animate a pen which is drawing a line as drawing a 2017 like example.

I don’t have any idea how to do that as the line should appear after the pen moving. My idea was to move from outside to inside the screen. That was efficient if the line is right.
Someone could give some clue or help I’m appreciating

Thank for you support. 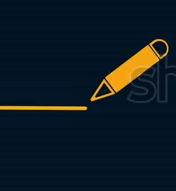 Are the line and pen moving in a linear fashion (straight), or curved?

If they are moving in a linear fashion (as shown in your picture), you can create the line with the draw or spline tool. Make sure you have only two orange vertex handles. Adjust the yellow vertex handles so they are right on top of the orange ones (or otherwise so it doesn’t curve) and at the top, turn the yellow ones off. The button should be called “toggle tangent handles” or something.

In your initial keyframe (before you want the pen to move), make your line very small and invisible. Placing it off screen is the easiest way, but it only works if the pen starts on the very edge of the screen. You can also set the amount to 0. I suggest you make sure your pen is done moving before you do any other steps with the line.

I don’t know the pattern your pen will move, but I"ll assume you need 2 way points. The first is in the initial position, and the second at the end position (this is all that’s needed for a straight line. You can add more if you want the pen to speed up or slow down along that line.)

If you preview your animation, your pen and line should go together. It’s possible you’ll need to make minor adjustments, depending on how picky you are and which type of waypoints you used, but I think they should move exactly in line.

If your line needs to move in a CURVED path, let me know and I can give you more instructions. I’m pretty new at this too, so I’m not sure the “correct” method of producing a curved line (or if there is one), but I do have a couple of tricks that I use.

You know, I did not read your post. Okay, so you want to make curved lines to spell 2017. For my method to work, either your background or your line/letters should be a solid color (I think there is a way to make it work even if both are not solid, but I’d have to do some testing).

I don’t know the best way, but assuming your letters are a solid color, here is what I would do:

See this tutorial if you need more help:
wiki.synfig.org/Subtracting_Shapes

If your line is colored more complicatedly, but your background is a solid color, you can do the same method, only make your shapes the color of the background and set them to “onto.”