Hello. Just gave it a try

Currently i was using gimp, inkscape and blender for my works. So far every program had it good and bad points. Synfig seams to complete this tripple for 2D-Animation.

I did some tests with it and found it a little bit hard to get into it, but so far it is ok.

On the other hand nice work so far. I will try a bit more and will see in which traps are waiting for me…

Hi niabot,
thanks for your notes on the first impression. We are aware of some of them.
About the translation of the English word “Amount” the guilty is not the German translator but the English word itself. That parameter (Amount) is really the Alpha for some layers (geometry) but means other thing for other kind of layers.
In any case you can propose another translation and we can update the po files. But, yes, not a fortunate name for the Alpha concept.

Some days back i started to get familiar with synfig. At first i must say: It is the only free tool i know that would be able to achieve what i tried to do (vector, 2d, composition, animation).

I also noticed that it crashes fairly often if you try out thing that you better shouldn’t do. But it does not keep me from doing so. In this regard there should be put more effort to check if nodes or changes are supported (don’t leading to crash). As long i don’t do this things, it works fine. Also the speed could be better. In comparison to Inkscape it is much slower at rendering.

But there are also some features missing, that could ease the use synfig. Most annoying for a beginner is the recording-function. If you forget to took it of, you will find lots of messed up stuff, forcing you to delete the keyframes from the last edited object. Even the red line (clearly visible) did not stop me to add new layers in this mode. (maybe the Button is to small)

Back to the user interface i have to say: Multiple windows aren’t bad. You can arrange them in many ways, but native windowheaders are wasting a lot of space. Especially the timeline in bottom window (default layout) is quite difficult. Sometimes i want it larger, other times smaller, to give the edit window more space. Its a bit complicated. Would be really nice to see some MDI like Interface in the future. Preferably oriented to the userinterfaces of netbeans/eclipse, which both are very intuitive, comfortable to manage and also support single windows, if you want them.

Shortcuts: Many shortcuts aren’t very intentional. Why not using the characters “A”, “B” directly? They arent’t used anyway in many contexts. Always pressing Control + X is a bit to much effort.

Now i offered some of my wishes for the future (big ones). So long i will stick to the current build and try to get the maximum out of it. My first testing object also growed a bit. Here is a short example animation from it. (left eye missing, because i was lazy and wanted to try other things first)

Waste of space in the GUI. Totally agree. Not a simple change because our resources are limited. Looking forward to some kind of solution we have started the first step to convert the gui to a glade-gtkmm design, so the changes in the future could be easier. Still being a long journey though.

Shortcuts needs revision too. Honestly I haven’t looked at it never but it deserves a clever implementation (include customization)

Please don’t give up and continue trusting on the project. We are doing our best with our limited time and knowledge.

Which OS/version are you using, and can you get it to crash repeatedly?

) and the crashes are more or less of random nature. But somehow i fear gray nodes/ducks, because if i have some of them the crashes seam to happen much faster. It happens not so often, but i guess every 1-2 working hours i will have a crash, mostly because of some segfault. At least sometimes i had some output on my console, so i’m pasted my lastest logs. You can find it here: pastebin.com/PhfNZe6h

Hi niabot,
firts of all thanks for report the logs.
I just would care at the moment for these warnings type:

Because the other more repeated:

means that you have removed all the elements of a bline and is a known and possibly easy thing to fix.

Regarding to the first one, it is a warning for something that shouldn’t happen but happen… It is that the render box (top-left, bottom right) box render area was modified while rendering. It is supposed that the tile render doesn’t care on that because it splits the render box into small boxes and if a new render request is done, the remaining tiles are discarded. But seems that it is happening (the render box resize) while a single tile is being rendered…
-G

The first thing happen during my first tries to understand linking and how to perform it. So i had a bline fill and exported it’s vertex list. Since i did not understood it completely i removed the linked list from my outline using disconnect. Result was an empty/non existing vertex list. It lead to fast crashes. In a other thread you informed me how to fix this. Since then i was more careful, not do this thing again.

The tile render seams to have problems if you switch frames/zoom fast and rendering isn’t quite finished.

genete - could this be the multi-threading bug coming up under linux too?

genete - could this be the multi-threading bug coming up under linux too?

In the TODO file of synfig-core there is a lot of interesting information. One of the TODO items written by darco was to shift from self coded reference counter system (current way to solve the multiple references of the same instance of an object in several places) to a collect garbage system. It shouldn’t be a huge task but a large modification I think. I’ve looked into the current collect garbage libraries used and the most referenced seems to be this one:
hpl.hp.com/personal/Hans_Boehm/gc/

But I don’t have experience on this.
-G

Most annoying for a beginner is the recording-function. If you forget to took it of, you will find lots of messed up stuff, forcing you to delete the keyframes from the last edited object. Even the red line (clearly visible) did not stop me to add new layers in this mode. (maybe the Button is to small)

Would help on this issue to change the rulers background color?
Any color suggestion?
-G 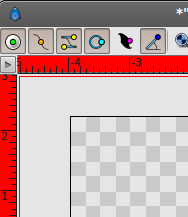 I would not prefer such strong colors. The bigger area alone does make them strong. Maybe a little animation (slight color change by time or so) would be nice. Since something is moving, telling you that if you will do now something, it will result in an action.

On the other hand im not really a fan of recording. I prefer more the blender like approach. Do the change anytime (and at any frame) you want. Press a button (keyboard or/and mouse, [blender uses “I” key) to store the change you made. Together with the usage of the cursor keys (left, right) for previous and next frame you can do it really fast. If you changed something and don’t like it, just switch the frame and your changes will be canceled. (values restored by normal interpolation (TCB…))

This is usefull, since usually you set up what you need (outline, fill,…), then you go through the frames and change/tweak it to your liking. If you use record, you will tend to accidentally insert keys you may not like. So you are forced to remove them. On the other hand im getting a bit annoyed, if im not in record-mode and get this ugly message box, that im not… Having the user to notify which changes he wants to keep would also remove the need to indicate record-mode at all.

On a second thought i would say: Having both is even a better idea.

I like all the ideas you have suggested. After the release I’ll start with the blinking button.

Firstly, a late hello and welcome niabot… glad to have your talents here

Actually, Blender does have a record option, it’s in the timeline window… personally I much prefer it to hitting the I key all the time - I find it difficult to keep track of all the limbs and fingers and spines and whether they’ve been keyed or not

It’s not just beginners that have problems with forgetting that they’re in animate mode - I do it all the time:) annoying for sure… But as for blinking icons, I would find that really irritating (I find the seconds changing on the digital clock in the corner of the screen distracting!)
… I’m not sure I’d be keen on big red borders either (for one thing it affects the perception of the colours in the animation)
$0.02 from me