I’d like to make an animated ripple effect: a set of waves that progresses in a circular manner, just as when a water drop falls onto a water surface.

A static ripple is easily obtained with a looping radial gradient (gradient: white - black - white ; loop: checked). But I cannot animate it in a satisfactory manner to get the effect of waves that smoothly progress towards the circle border, while a new wave appears.

Changing the size or location of the wave does not help in making a new one appear obviously. All these experiments are in the attached sif file if you want to try it out.

Any idea how to get a nice circular wave progression? By the way I want to use it as a boat ripple: 4shared.com/video/l0C0ylsY/river_boat.html

Use a converted value node gradient from Gradient Rotate:
synfig.org/wiki/Convert#Gradient_Rotate
I wish that gradients cpoints were more smart.
-G

Use a converted value node gradient from Gradient Rotate

that’s what I did in the first test described above (and in the provided sifz file), but instead of looping/repeating the gradient part that is invisible into the new interval, it puts a simple white color in this region… as you can see in the attached image.

Looks to me as if the gradient rotate does not support / take into account the “loop” attribute of the layer. 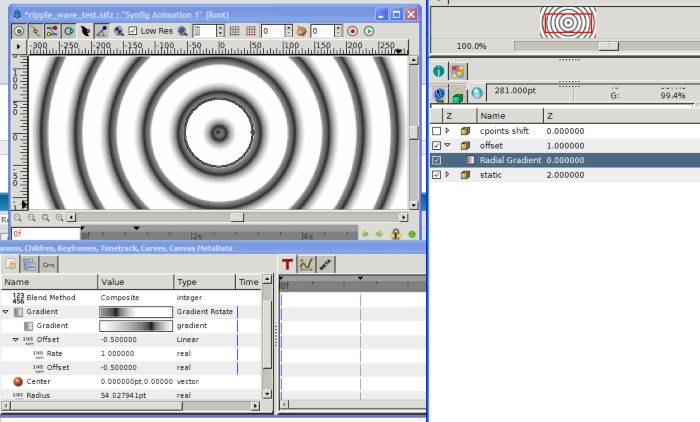 Sorry, I did a quick and dirty reply.
It is a bug, indeed. (Weirdly it used to work long time ago)
If you want to help us, please report it in the bug tracker of sourceforge.
Thanks
-G

done. thanks for looking into it:
sourceforge.net/tracker/index.p … tid=757416
B.

salut,
here’s something I did a while ago, I don’t really remember what I did, but you might find it worth dissecting
ripple.sifz (2.62 KB)

here’s something I did a while ago, I don’t really remember what I did, but you might find it worth dissecting

Hello Saorsa,
Your way of achieving ripples by growing circles with a mask is effective, thanks for this idea. I’ll nevertheless wait for the rotating gradient bug to be fixed as it should be way easier to tailor and more performance savvy.

It is a bug, indeed. (Weirdly it used to work long time ago)

bump for bug sourceforge.net/tracker/index.p … tid=757416 that kills gradient rotate… if some developper has some spare time in the course of releases… even though I’d prefer SVG import to be fixed first.

Sorry for not being able to code properly

and thanks for your (already!) great work.
B.